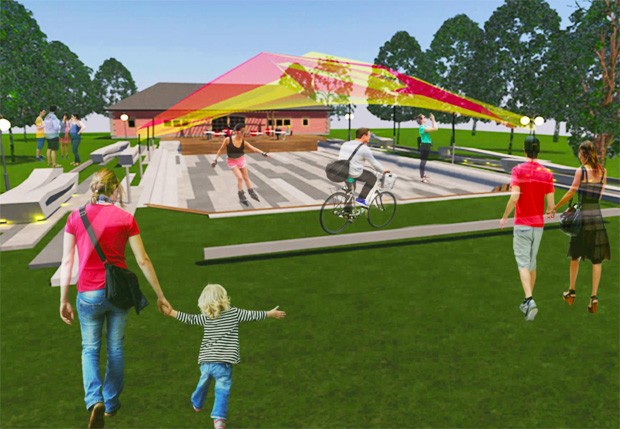 An architectural rendering of the square in Notre-Dame-de-Grâce Park from the Groupe NDG design team.

It was a celebration of collaborative design, and a chance to check out some cool new ideas for Montreal’s parks.

On April 28, Students and professors from Concordia and the Université de Montréal, and residents of the Côte-des-Neiges/Notre-Dame-de-Grâce (CDN–NDG) borough gathered to mark the end of the first phase of an initiative to redesign two of its most popular green spaces.

The project was conceived of as a way to build bridges between the borough’s two districts, while drawing on the strengths of its universities.

“From the beginning, we insisted that we shouldn't have a competition among the students, but instead work with them and the community in collaboration,” says Silvano De la Llata, assistant professor in the department, who was the university’s lead academic on the project.

“The outcome could be, for example, a monument, a plaza or an art installation,” says De la Llata. “The spaces will be completed and inaugurated in mid-2017 in the context of the city’s 375th anniversary.”

The 30 Concordia students collaborated with 40 members of the public in a “design charrette,” consisting of two day-long sessions on-site at the parks’ chalets.

“A charrette is an intensive participatory design exercise in which professionals, scholars and/or students facilitate the visioning and conceptualization of an urban space or a project through a dialogue with the community,” De la Llata explains.

“We had young people, elders, single and married people, dog owners, children, artists, and engineers. Each of them gave different inputs. Some mothers, for example, reported they would want to be able to watch their children in the playground but at the same time relax and have tea or coffee near the chalet.”

Mainly, though, the design groups determined from the community members' input that they liked what was going on in the park already, De la Llata says. "That is where the idea of the versatile/flexible platform came from — a space that is delivered to the community for them to transform, adapt and complete depending on the circumstances and needs."

Jasmine Ali, an undergraduate student in Urban Planning and member of the Groupe NDG design team, says the involvement of the community was a key part of the process. "It's their park, they go to it, they know more about it than us."

A key idea behind the challenge was to plan the space from within the space itself, De la Llata says, explaining that the participants used ribbons, boxes and other items to delineate where elements of the design would be located.

“This methodology, which we call ‘planning-in-situ,’ is completely experimental — a method that democratizes urban design and planning. It involves conversations, presentations, walking tours, video-photographic analysis and sketching."

At the end of the project, the Concordia students nominated two of their classmates, Ali and Faizan Jaffar — to receive internships worth $2,000 each. They’ll work with the borough this summer to develop the park projects.

"I'm very grateful for this opportunity and looking forward to starting my internship," Ali says. "As for my future plans, I'm looking towards continuing my education and doing a masters specifically in urban design."

Jasmine Ali (pictured with borough mayor Russell Copeman) and Faizan Jaffar will receive internships worth $2,000 to develop the park projects. | Photos by Jean Beaudin for Côte-des-Neiges–Notre-Dame-de-Grâce

Students from Université de Montréal’s landscape architecture department also participated in a separate design charrette. Five teams from UdeM spent a weekend in Benny Library putting together their proposals. The first-place team was awarded a prize of $2,500, while the second-place team received $1,500.

‘A sense of unity and belonging’

“There was a lot of collegial and friendly collaboration among professors from UdeM and Concordia in the planning of the whole exercise,” De la Llata says. “We had meetings with city officials from the borough. They were very responsive to our proposals and adapted the exercise to suit the different needs of each school.”

Borough mayor Russell Copeman, a Concordia alum and former associate vice-president of the university, was on hand to award prizes at the special event, held at La maison de la Culture Côte-des-Neiges.

The projects presented by the students from Concordia and UdeM are remarkable, said Copeman. “They fit directly into our vision for the 375th anniversary of Montreal, to support the sense of unity and belonging to all the citizens of our neighbourhoods, and to the common history of Montreal and our borough."

For De la Llata, the experience illustrated the value of collaboration. "It brings out the best in people," he says. “We're really proud of ourselves, as well as the community members of NDG and CDN, and everybody who participated in this project.”

“The spirit of this exercise is that these two public spaces, in which students and members of the community have collectively contributed their ideas, represent the union between two culturally and historically distinct neighbourhoods,” he adds. “It’s a constructive dialogue between the past and the future of Montreal.”

Find out more about research in Concordia’s Department of Geography, Planning and Environment.