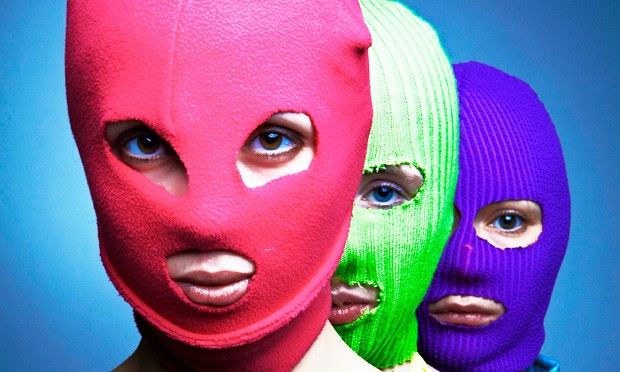 Vivek Venkatesh is an associate professor of Education in the Faculty of Arts and Science. In anticipation of Pussy Riot’s appearance in Montreal on Wednesday, November 9, he secured an interview with two members of the band and their manager.

It provides a practical framework within which public pedagogy can influence political, economic, social and cultural agendas. Pussy Riot has been a massive influence on my work concerning issues of human rights, hate speech and promoting civil dialogue.

Their use of the punk ethos as a lifestyle — something that Maria “Masha” Alyokhina refers to in the interview below — resonates very closely with my own ethos for curating Grimposium.

The festival brings together key actors from underground music scenes in an attempt to render more transparent the inner machinations of the production and consumption of specific musical artforms like extreme metal, electronic and punk.

Moreover, our work with the SOMEONE (Social Media Education Every Day) project, where I’m the director, explores the sustained use of mobile and digital media to encourage civil dialogue — a primary concern of Pussy Riot member Alexandra “Sasha” Bogino.

I spoke with Pussy Riot’s co-founder Alyokhina, along with the newest band member, journalist Sasha Bogina, and their manager, Alexander “Sasha” Cheparukhin, 2012 winner of the WOMEX award for his contribution to world music.

Below are highlights from the interview transcripts.

As the band’s manager, Sasha, what would you like to achieve with this North American tour?

Sasha Cheparukhin: We want people to pay attention to what's going on with human rights in Russia. At the same time, we want to support MediaZona, Pussy Riot’s Russian-language independent online media channel. It has become one of the most influential and brave media sources in Russia.

Merchandising money from selling T-shirts on the tour goes to sponsoring MediaZona. Not one single cent goes into a private pocket. A portion of the funds are also dedicated to helping imprisoned Ukrainian filmmaker Oleg Sentsov, who is unjustly serving 20 years for terrorism. Masha is personally helping his family.

What motivates you to be their manager? You must feel under threat…

SC: I used to be the producer of the biggest music and theatre festivals in Russia, but I lost all these opportunities because of my connection with Pussy Riot. I feel it's my fate to do something for them. About the danger — the Russian system is more like the mafia. It’s not like the old totalitarian system.

The current Russian police and security forces are not a well-organized system, as it used to be in the Soviet Union. They're more like a collection of institutions that want to show they're loyal to the government. In order to become a target, you have to become a personal enemy of somebody with power. Sometimes they pay attention, sometimes not. It's a lottery, because if you become someone's personal enemy, you could die.

Masha, do you think that art should be dangerous?

Masha Alyokhina: The main thing about political art is the protest. If you're talking about Russia, a lot of artists decide to serve the interests of the government or those who have power. If artists decide to do this, they stop being artists. They become servants of the state. Artists should provoke and make conflict. Only conflicts can move society to think. If society doesn't think, there's stagnation and it won't progress.

MediaZona, which we founded in early 2014 when we were released from prison, is independent media covering all the topics connected with freedom and Russia — like police violence and prison conditions.

It has been two years and it is one of the most influential media voices in Russia. Our politics moved from government buildings to political courts because all of the people who actively express their views, they have criminal cases. Some are in prison. Some are actually killed. So we're in a very difficult period.

What's next in your plans for influencing political discussions?

MA: Next year is the 100th anniversary of the Russian Revolution, so I hope to connect to that in some way, through activism and music. For me, punk is a way of life and a way of thinking, not a genre of music or theatre. Express yourself as much as possible. When we started with MediaZona, we didn't know how to build a human rights project, but we found a way. Every person has a story and a choice. History is a combination of our choices. If we will not do the right thing, who will?

Sasha, tell us more about MediaZona and how it functions

Sasha Bogina: We’re just 17 people in a small news room and we’re kind of hiding, moving around, so the police don’t come and confiscate our things. MediaZona was created because the history of Russia is written in the courtroom and there are many trials with people getting sentences for political activism. MediaZona records everything in the courtroom and we publish the transcripts online.

Recently, a young blogger was arrested and charged with extremism and offending religious people because he was playing Pokémon Go in church. He's 19 years old. It's ridiculous. He awaits his trial in prison. It says a lot about the situation in modern Russia.

The biggest media is the Russian state media and they don't report on prisons and penal colonies. People want to know what happened to their family members in jail. There's almost no connection with prisoners and the outside world. Some prisons and penal colonies are normal, with letters and visitors, but some are really closed. Even if you have a lawyer, he might not get in.

Masha, what scares you the most about the future of mankind?

MA: I don't want people to be indifferent. I want people to take sides — the side of freedom. Since 2014, when the war between the Ukraine and Russia started, a lot of people decided not to speak about politics anymore. For me, all the support we got from the world during our time in court and prison — we should give that forward. It's a big responsibility for us, to set an example.

Sasha, what scares you most about the future of human rights?

SB: It’s when people just follow the state media and propaganda. They start hating other countries because the state media tells them to. That's what I'm really afraid of. Our differences, as countries, as people, don't really matter. People forget there are a lot things that unite us. We forget this because we watch state media to tell us who to hate.

Find out more about Concordia’s Department of Education.