Shoushi Bakarian: “I had options at other Montreal universities, but Concordia stood out as the best fit for me.” | Photo by Dario Ayala for the Globe & Mail

What does it take to be a next-generation inventor? For Concordia undergraduate Shoushi Bakarian it means a lot of hard work, creativity and the experience of living through civil war.

The third-year aerospace engineering student in the Gina Cody School of Engineering and Computer Science has designed and helped invent a clean energy ventilation device for Cessna planes. The Ventus can at once cool cabins while acting as a charging dock for any accessory that needs to plug into a USB outlet — not typically found in older aircrafts.

Such ingenuity has turned the heads of academics and industry leaders, and generated national and international media coverage.

And Bakarian's path to success is as remarkable as her achievements in the lab.

From civil war to Concordia

Four years ago, Bakarian was living with her family in Aleppo, Syria, facing an uncertain future due to the civil war that was raging in her home country.

Following this difficult period, which was clouded by violence and displacement to Lebanon, her family arrived in Montreal in December 2015. Soon after, Bakarian took part-time jobs to help support her family and considered several universities to pursue her dream of becoming an aerospace engineer.

It was Concordia’s welcoming reputation towards international students that drew her to the Gina Cody School.

“I had options at other Montreal universities, but Concordia stood out as the best fit for me,” she says.

Bakarian made important connections early in her academic career. While attending orientation with her sister, Meghri, a third-year child studies student, she was approached by Andrew Woodall, dean of students. He connected them with Arpi Hamalian, associate professor of education in the Faculty of Arts and Science. 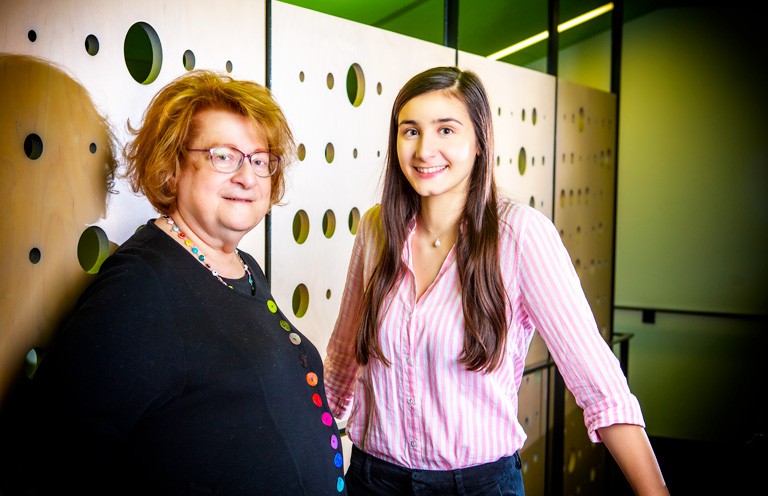 Hamalian has served as a mentor for several students over the years who have arrived at Concordia as refugees. In October 2018, the Carold Institute/Community Knowledge Exchange (CKX) created the Arpi Hamalian Fund in recognition of the professor’s decades-long work in adult education and citizen participation.

“I provided Shoushi and her sister with little hints and strategies for navigating a system that was new to them,” Hamalian says. “I did this with the help of academic advisors in their faculties.”

From the beginning, Hamalian was impressed with the Bakarian sisters.

“Instead of being beaten down by their situation, they were motivated,” she recalls. “Both Shoushi and Meghri are self-starters who are eager to follow advice, then chart their own course.”

For Shoushi, success did not come overnight. She had to balance work, a full course load, adapting to a new country and learning a fourth language.

“I was quite overwhelmed my first year, but I was lucky to have the support of my family and Arpi in particular.”

‘A space to test my ideas’

Bakarian made another important connection at an outreach event hosted by Stratos Aviation, a non-profit organization dedicated to promoting careers and opportunities in the aviation industry. There she met Stratos founder Naor Cohen (BA 04) who asked her to work on an idea to cool cabin spaces in Cessna planes by compressing and cooling air.

“This opportunity gave me the time and space to test my ideas and learn from others,” Bakarian says. “I was also able to integrate the idea of the charging device, something I hope we can develop further. We are imagining a similar device that can harness wind power while doing activities such as camping.”

Soon after, Montreal-based aerospace giant Bombardier learned of her work and offered her a student internship.

As if working two demanding jobs and tackling a full course load isn’t enough, Bakarian is also active in the community. She is a scout leader for children aged nine to 12 and has led troops of up to 60 kids to Camp Kinkora, as well as a summer trip to Armenia. She also tutors other newly arrived Syrians and helped start a community volleyball team.

Bakarian says the experience of living through armed conflict prepared her for her current success at Concordia.

“During the war my family lost so much and I basically had nothing left except for a few books on science,” she recalls. “Before this I wasn’t the greatest student and science didn’t interest me very much. The situation forced me to study these books and opened the door for a career in engineering.”

Find out more about the Department of Mechanical, Industrial and Aerospace Engineering at the Gina Cody School of Engineering and Computer Science.