Siblings dash across the country and the world

Updated August 10, 2017 — The sister and brother have made it to the final six teams on Amazing Race Canada. Watch them continue their quest on the next episode, which airs on CTV on August 15.

When Andrea Cavaleri, BFA 14, and her older brother, Adam Cavaleri, returned home to Montreal this summer after competing as a team on the popular CTV show Amazing Race Canada, they couldn’t tell anybody about their adventure. 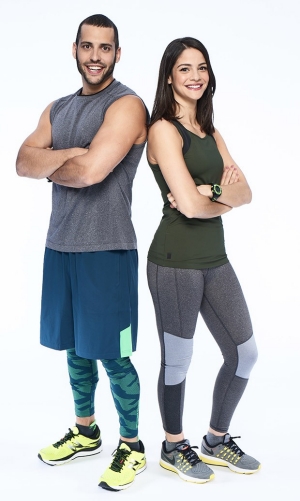 Now that the show is airing on CTV every Tuesday night at 8 p.m., the siblings get to relive their wild, globe-trekking experience alongside their friends and family. Together they can watch play-by-play footage of a worldwide race that has big prizes waiting at the finish line.

The show, in its fifth season, sends 10 two-person teams across the nation and over international borders to solve clues and complete challenges. The teams that fall behind are eliminated along the way.

While the race is a step outside of Cavaleri’s normal comfort zone, her athleticism and competiveness were sharpened when she played basketball for the Concordia Stingers in her first year.

And her Concordia major in design, which included a term studying drawing in Italy, helped develop her creative thinking and international outlook, an asset for the show.

This is the third year in a row that Concordians have competed in Amazing Race Canada. Cavaleri follows Antoine Tetreault, BComm 13, from 2016 and Sabrina Mercuri, BA 05, from the previous year.

Although Cavaleri won’t give away any show spoilers, she was able to answer a few questions about her experience overall.

Despite tearing your ACL (anterior cruciate ligament) and having surgery back in August 2016, were you still fit enough to embark on the Amazing Race Canada by the first week of May?

Andrea Cavaleri: “Well, not really, but I pushed myself. This is my third year applying. Three years ago, I applied with my best friend [they were selected as an alternate team]. She encouraged me to do it. I’m really not adventurous.

The following year, she couldn’t do it because of work. So I applied with Adam. He was kind of jealous that we didn’t apply together the first time! And we made it far through the application process but we didn’t get all the way through.

This year, I wasn’t going to apply again, but the Amazing Race Canada people called us in November and asked us to apply. I had just started walking in November but Adam pushed me to apply, and I pushed physio for the coming months so I could be ready to race.”

At first, why weren’t you sure that you wanted to participate in Amazing Race Canada?

AC: “The first time, when I applied with my best friend, I didn’t want to do it because this is not my thing. I’m not adventurous at all. I’m scared of everything, but she really is adventurous. So she kind of forced me.

Then, going through that whole process, I thought, ‘Well, now I want to be on. I actually want to do it.’”

What was it that caught your interest?

AC: “Once I was pushed out of my comfort zone, I got a taste of it and thought, ‘Well, okay, maybe I can actually do this.’

The thing that is so great about the show is that you don’t need to be just physical or just be artistic. You need to have a bit of everything. Sometimes you’re going to be stronger at some things than others.

When I realized this in the casting process, it gave me confidence that maybe I could actually do it.”

Once you embarked on the race, what was it like?

AC: “There is nothing that is going to top this. It was the absolute most insane thing I have ever done. I hate to use the word, but it was absolutely amazing.

I also didn’t think I could get that close to my brother. That was interesting because, you know, we are siblings. It’s a different dynamic than when you go with someone you are dating or even a best friend, right?

When you’re not racing, you’re locked up in your hotel room. You have no TV. No cell phones. You can’t talk to anybody else but your partner.”

And that actually brought you two closer together?

AC: “Yes. It surprised me and it didn’t. I thought that we would argue more, but we seemed to get along for the most part. They will still show some of our arguments, I’m sure.

It was weird to spend so much time with him. When Adam graduated high school at age 17, he left Montreal. He went to the States and then Ottawa for five years. So I missed this huge chunk of our relationship as adults.

We were always very close growing up. We were into the same kinds of things. We are both athletic. And then we missed this big chunk of time.

It was interesting to see, once we did spend so much time together, how much hasn’t really changed. The things that bothered me before about him still did and I also realized why we used to get along. In coming home now, we are a lot closer. That’s for sure.”

If you had the opportunity to do something like this again, would you do it?

AC: “Oh, absolutely. Now that I know that I can push myself to do things I never thought I would do, I just want to do everything. I am way gutsier. I feel that before I wasn’t even living life properly. I was just so cautious.

So, yes, I would definitely do this again.”