Independent microbreweries are a growing trend in many American and European cities due to the full flavour of their beers and experimental nature. However, craft beer has only just recently started gaining popularity in Asia.

Simon Siemsglüss, BComm (econ.) 03, noticed this gap and has since established his own brewery, Nine Dragons Brewery, in Hong Kong. 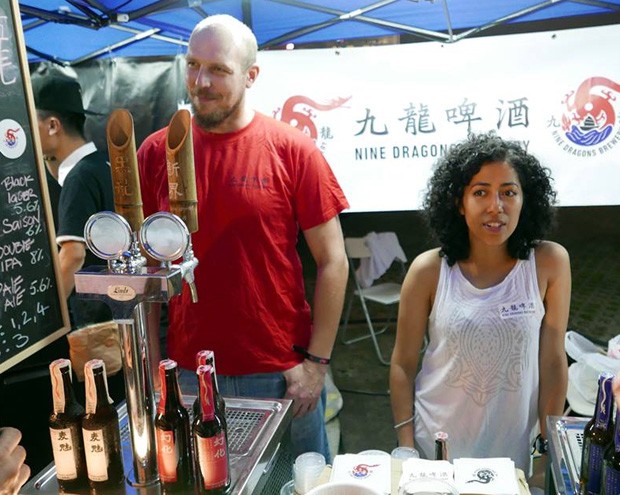 Master brewer Simon Siemsglüss (left) at his Nine Dragon Brewery in Hong Kong. He credits Concordia for immersing him in a multicultural learning environment. “Being in Hong Kong now, I don’t even think about it anymore.”

German-born Siemsglüss was no stranger to good beer. However, it wasn’t until he came to Montreal in 2002 that he developed a taste for the craft variety.

“I was getting bored with German beer and discovered something like craft beer for the first time when I moved to Canada,” he says. “I actually drank my first Belgian beer in Montreal.”

He quickly realized that if he wanted a good ale that catered to his palate, he had to brew it himself.

In 2008, Siemsglüss decided to capitalize on his love for craft beer. He became a certified brewmaster and completed an MSc in Brewing and Distilling at Heriot-Watt University in Scotland four years later.

His first experience as a brewmaster was during an internship for Paulaner, a German microbrewery in Munich. By the time this was over, Siemsglüss was asked to replace a brewer at one of their brewpubs in Shenyang, China.

“I was pretty excited at the idea of brewing in China and immediately jumped on the occasion.”

He adds, “Brewing in China requires a fundamentally different approach compared to the United Kingdom and especially Germany.”

Small breweries in China are regulated and often cannot distribute outside of their establishment. He has also had difficulties locating a suitable brewing space. Yet none of this has discouraged him.

While still trying to find a place to establish his brewery, Siemsglüss has developed partnerships with brewers in Germany to use their facilities — he calls this “contract brewing.”

“There are actually a lot of small breweries — and some quite well known — that do contract brewing,” Siemsglüss says. “It allows you to focus on brand-building, sales and product-improvement.”

He brews all of his beer by hand, and has complete faith in the quality of his product, something that, as a microbrewer, he is very passionate about.

Siemsglüss believes that Concordia helped prepare him for his own venture by exposing him to more practical forms of education. “I think that this is very important in startups of any type, to work with limited resources and focus on what is most important,” he says.

Things are only just getting started for this Siemsglüss. His team consists of five brewers and two office workers who help him run his business.

“It’s great fun as a team,” he says. “We all enjoy the intensity of the job and a well-deserved cold beer, fresh from the tank at the end of a long, hard day.”

And well-deserved it is. According to Siemsglüss, crafting beer involves “12-hour days of madness” six days a week.

Ultimately, Siemsglüss wants to provide people with more options when it comes to their choice of beer.

“We all need to work hard together in order to bring our products out and available on many taps. People deserve a choice of good beers.”