Making the jump from campus to corporate boardroom

It was an offer Michael Di Grappa, BA 84, couldn’t refuse.

The alum was all ears when he received a call from his long-time friend, Concordia Chancellor Jonathan Wener, BComm 71. Wener wanted to share news of a job opening at Canderel, a Montreal-based real estate company he founded and leads.

“Jon is someone I’ve known for over 20 years,” says Di Grappa. “I’ve admired and respected him for a long time. Joining him at his company was an opportunity I could not pass up.” 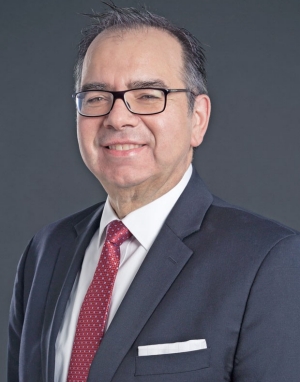 Di Grappa took the role of senior vice-president of property management at Canderel in June 2016. It represents a big career shift for the Concordian, who spent the previous 30 years working in higher education — mainly at his alma mater.

His abiding relationship with Concordia started as a student. Di Grappa was accepted to McGill University but chose Concordia’s School of Community and Public Affairs instead. “I saw it as offering a multidisciplinary, bilingual education with the possibility of practical experience through internships,” he says.

From his start at Concordia in 1981, Di Grappa was at the university, almost continuously, for the next three decades. The exceptions were pockets of time he spent in graduate school at Columbia University in New York City, where he earned a master’s degree in public policy and administration, and at the Harvard Business School in Boston.

Di Grappa’s first job was as a receptionist at Concordia’s School of Community and Public Affairs, and then he joined the president’s office as an assistant in 1986. “I was responsible for preparing briefing notes, replying to mail and preparing the university’s annual report,” he says.

The Concordia alumnus served as liaison between university departments and external contractors who were planning the expansion of the George Vanier Library and construction of the J.M. McConnell Building and Oscar Petersen Concert Hall. As Di Grappa was already involved in managing Concordia’s buildings, guiding future construction was a natural fit. He was given the job of executive director of Facilities Management — which oversees Concordia’s physical environment — in 1997.

Di Grappa began the first of two back-to-back five-year terms as vice-president of Services in 2000. In that role, Di Grappa was responsible for Facilities Management, Enrolment and Student Services, Instructional and Information Technology Services, Ancillary Services and Human Resources. The main priority in those early years was overseeing a massive infrastructure improvement program.

At the time, Jonathan Wener was chair of the Real Estate Planning Committee of Concordia’s Board of Governors, which had governance oversight of major infrastructure spending. The two worked together closely. “Jon was a great mentor throughout the process,” says Di Grappa.

While Di Grappa held a number of senior roles at the university, he has no trouble picking a Concordia career highlight.

“I was interim president from November 2007 to July 2008. That gave me the opportunity to contribute at a different level at a critical time in the university’s history. I could see the university from a unique perspective,” he says.

Di Grappa finished his career in higher education at McGill. He served as its vice-principal of Administration and Services from 2010 to 2016, before joining Canderel.

Expertise that carries over

He’s gone from a university campus to a modern office building. Yet that doesn’t mean there isn’t common ground between Di Grappa’s career chapters. “I think there’s a lot of transferable knowledge and skill sets that apply in both environments,” he says.

“There are many complex issues we deal with. There are teams of talented individuals we have to assemble and lead. And there are potentially hundreds of millions of dollars on the line,” he adds.

Of all the similarities, he notes the ability to recruit, train and retain teams with complementary talents as probably the most important. “I’ve spent a fair bit of my time since arriving at Canderel working on human resources-related issues,” Di Grappa says.

“Another aspect is putting budgets together and understanding the needs of a client, whether that’s a student, professor, financial investor or tenant.”

There are some aspects of his new job that will take adjustment.

“I’m not sure I’ve had a typical week yet. I’ve enjoyed getting to know and work with our people, getting to know our assets that we manage across the country,” says Di Grappa. Canderel oversees about 2 million square metres of property in Canada.

Part of his responsibilities include visiting the company’s regional offices in Toronto, Vancouver, Edmonton and Calgary. At one point last summer, Di Grappa reports, he was on a plane every week for 10 weeks running.

Even with the career shift, Di Grappa continues to think about his alma mater with fondness. “I’m very happy for Concordia and delighted to see the impressive developments under President Shepard and his team,” he says.

“It’s number one in many respects. There are wonderful things being done there by brilliant and talented people.”