For Mira Ahmad, getting involved in politics has been a natural progression. Ahmad, a student in Concordia’s Department of Communication Studies, started by volunteering a few years ago in her local riding of Lac-St-Louis, Que., and moved up to eventually managing a campaign for Liberal candidate Rachel Bendayan in the Outremont riding during the 2015 federal election campaign. 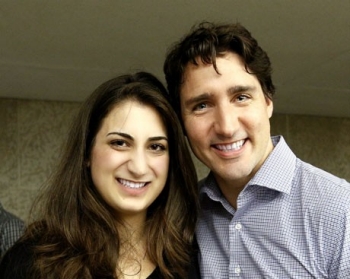 In May, at the Liberal Party of Canada’s national convention in Winnipeg, Ahmad, 21, was appointed president of the Young Liberals of Canada. In addition to her duties with the Young Liberals, Ahmad is executive assistant to Thomas Pitfield, founder of independent think-tank Canada 2020 and head of Data Sciences Inc., a firm specializing in analytics, research and digital marketing.

Ahmad recently took a few moments to discuss her new role as president as well as the outlook for young people in politics in Canada.

How did you get involved with the Liberal Party?

Mira Ahmad: “I started volunteering when I was 15. I went to the office of my local Member of Parliament, Francis Scarpaleggia. There was a campaign coming up, so I made some phone calls and knocked on doors and I got more and more interested.

I started a Liberals club while in CEGEP at John Abbott College [in Sainte-Anne-de-Bellevue, Que.]. And then, when I went to Concordia, I became president of the Liberal Club right after we had organized the leader’s campus tour where Justin Trudeau had visited Concordia, McGill University and Université de Montréal.

I was focused on engaging the student body by hosting panels, debates and conferences. My term was short, though, because I joined the provincial wing of the Young Liberals in Quebec soon after.”

What is it that drew you to the Liberal Party?

MA: “Those involved with the party embrace young people. If you show that you’ve got an interest, even if it’s really just a small project, they take it very seriously and they give you the resources to succeed in whatever you are trying to accomplish.

I think they’ve been really open with young people, specifically when Justin Trudeau became the leader. He’s considerably young and he’s named himself the Minister of Youth, and there a few announcements that he’s made recently regarding the Youth Council and other projects involving young people.

Right when I started volunteering I felt that they valued my opinions and ideas, and it was easy to get involved.”

What do you hope for your two-year term as president of the Young Liberals?

MA: “I want to promote a lot of the promises that the prime minister made during his campaign to young people and make sure that the government delivers on them.

I really look forward to working with all the members of the Young Liberals — there are almost double the amount that there were before Trudeau came along — and we’ve got a lot of active, engaged and interested young people who want to see some policies come about.

We also hope to organize an international forum for young leaders of progressive youth political wings from across the country and abroad.

In addition to my role as president, I’m also the only youth on the National Board of the Liberal Party, which is pretty significant. I’m still getting to know a lot of the people on the board and we’re in transition, especially in light of the new constitution that we voted on in Winnipeg.

It affects a lot of the different commissions. For example, now there is no membership fee, which is great for young people because there are less barriers to joining the party.

Although the Young Liberals is a partisan group, our outreach is to young people in general because we want them be part of progressive conversations.”

What kind of impact has the current government’s approach to youth had so far?

MA: “Ever since the Liberals took office, they’ve hired a lot of staff and many of them are quite young. I think it’s a testament to what the government wants to do and continue to do.

It’s encouraging because young people will feel like they’ll actually have a chance to work on the hill and see how it all happens. It’s now become a reality.”