The Beatles recorded We Can Work It Out in 1965. Alas, only five years later they simply couldn’t and John, Paul, George and Ringo went their separate ways. Remarkably, more than four decades later the Lads from Liverpool continue to enthrall music lovers.

Craig Morrison, ethnomusicologist, musician, writer and long-time Concordia instructor, will explain that phenomenon and more at the university’s Homecoming 2012.

Hear Craig Morrison talk to Howard Bokser about the Beatles’ ties to Montreal, as well as the public’s ongoing fascination with the Liverpool group. He also talks about his own background, music and band, Vintage Wine. 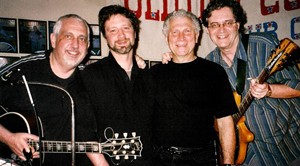 On September 28, Morrison will reveal The Beatles and the Montreal Connection at the J.A. De Sève Cinema (Room LB-125, J.W. McConnell Library Building,1400 De Maisonneuve Blvd. W.). The next night at the Westin Hotel, he’ll perform rock and roll hits of the ‘50s, ‘60s and ‘70s — including those of the Beatles — with his group Vintage Wine at the President’s Reunion Gala and 75th anniversary of the Association of Alumni of Sir George Williams University.

The link between John, Paul, George and Ringo and Montreal may not be obvious, yet Morrison says there’s plenty to discuss. “I’ll be talking about the Beatles' performance here in 1964. On that tour, they played only 12 songs wherever they played, and people screamed their way through it and loved every moment of it.

“I’ll also have film clips. I’m going to play a couple of little bits and ask, ‘What song does this come from?’ And I’ll have some recordings and show some images. So it’ll be a multimedia Beatle extravaganza.”

While Paul McCartney, George Harrison and Ringo Starr played Montreal several times after their group’s 1970 split, the city was a particularly notable venue for one member of the Fab Four. At the Queen Elizabeth Hotel in 1969, John Lennon and his wife, Yoko Ono, held their “bed-in,” a week-long peace protest.

“Even to this day, the hotel has the John and Yoko Suite — you can rent and sleep in the same kind of bed,” Morrison says.

While Morrison has taught several Beatles courses at Concordia and elsewhere  — including a lecture at the Montreal Museum of Fine Arts during its 2009 exhibit called Imagine: The Peace Ballad of John & Yoko — his musical knowledge extends past Liverpool, to be sure.

He earned his PhD in humanities in 2000 from Concordia. “My thesis was Psychedelic Music in San Francisco,” he says. “My fascination is musical styles: how they’re born, how they evolve, what happens to them.”

The Victoria native says his connection to the Beatles came early. “I was a Beatles fan from the first moment, even before we saw them on Ed Sullivan in February 1964. I love their music.”

Surprisingly perhaps, the Beatles’ appeal continues even today. “When my Beatles course was announced at Concordia a few years ago, it filled up with 90 students almost overnight,” Morrison recalls. “People in the Faculty of Fine Arts said they never saw that kind of response. I had a student who told me last year, ‘I can’t do that concert review you asked for because it’s in a bar and I’m only 17.’ ”

The music of the Beatles is also part of the repertoire of Morrison’s group, Vintage Wine. Its lineup includes Morrison on guitar, Alex Nesrallah on keyboards and acoustic guitar, Gary Sharkey on drums and Ryan Fleury, a Concordia Department of Music alumnus, on bass. The band members share lead vocals.

“We do all of the classics — Elvis, the Beatles, the Rolling Stones and the British Invasion, like Gerry and Pacemakers, and the Rockabillies, like Jerry Lee Lewis,” he says.

Morrison, who’s released nine CDs during his career, and Vintage Wine will return to the Oscar Peterson Concert Hall on February 8 and 9, 2013, for the 16th Annual Roots of Rock and Roll Concert. “We’re calling the concert Jailhouse Submarine: Music from the Movies. ‘Jailhouse’ is Jailhouse Rock, which gives you Elvis, and ‘Submarine’ is Yellow Submarine, the Beatles,” he explains.

The musicians will cover songs from a variety of other films. “It’s going to be mostly famous movies, Elvis movies, rock and roll classics likes Rock Around the Clock, Easy Rider, as well as Grease,” Morrison says.

It’s no coincidence that Beatles music will play a central role in the concert. As Morrison says: “There’s never been, in the history of entertainment, an act or an artist or a group that dominated the industry and the fans’ imagination in that way for so long.”