The Concordia grad is executive director of Apathy is Boring, a non-profit that educates youth on how to actively participate in a democracy
|
By Molly Hamilton
Source: University Advancement 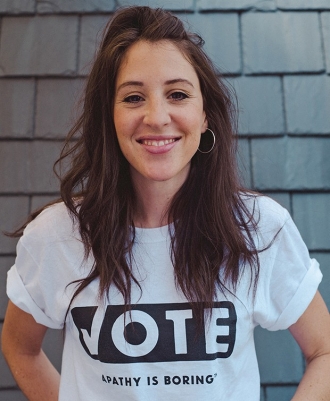 Millennials — the generation born between 1980 and 1995 — represent a quarter of Canada’s population and the country’s largest voting bloc.

Yet when it comes to turnout, a troubling percentage of young people don’t show up to the polls.

“What we’re learning is not that young people don’t care about issues that affect them, their families or their communities — they do,” says Caro Loutfi, BFA 14, who was honoured on March 3 by Women of Influence for her work with Apathy is Boring.

Loutfi joined her fellow alumna Gina Cody, Eng 81, PhD 89, co-chair of the Campaign for Concordia, on this year's list of the Top 25 Women of Influence.

“But young people are increasingly retreating from our formal civic institutions,” Loutfi explains. “They don’t see politics and government as the most effective way to create change, and they don’t see themselves reflected in our governments.”

As a result, she says, many millennials prefer to engage through informal spaces such as protests, social media movements and community organizations.

“All of that is great, but if we stop there we’re not actually changing the systems of power that support inequality or injustice and we’re not creating long-term sustainable change.”

From intern to executive director

This is where Apathy is Boring comes in. Created in 2004 — one of the co-founders was Concordia alumna Ilona Dougherty, BA 03 — this non-partisan non-profit aims to educate youth on how to be active participants in a democracy.

When Loutfi first joined as a communications intern in the summer of 2013, before her last year at Concordia, the organization was still quite small.

Near the end of her internship, she was offered a full-time job as a youth coordinator; then, in 2014, she was named director of operations.

“That role really gave me a good grasp of all the different things that Apathy is Boring was doing, who the founders were and how our team worked, and I learned a lot about the finances of the organization,” Loutfi says.

After nine months, she found herself promoted to executive director.

Under her guidance, Apathy is Boring has advanced exponentially in engaging youth across the country. In the 2019 federal election, the organization reached more than 2.4 million Canadians, its most expansive campaign to date. 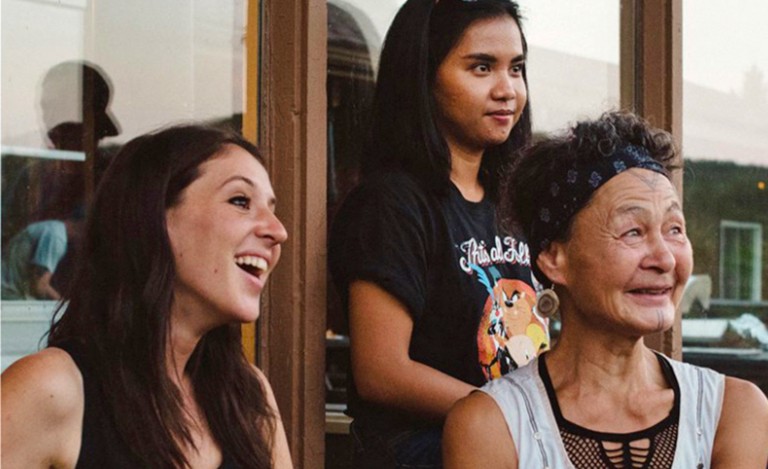 Caro Loutfi (left) with participants of Apathy is Boring.

“We’ve grown a lot,” Loutfi says. “We have a staff of around 25, eight regional offices, and we offer programming to hundreds of youth and reach millions through our get-out-the-vote work.”

Although Apathy is Boring is best known for its campaigns to boost voter turnout, the organization’s work goes beyond the traditional election cycle.

For example, its RISE initiative, in collaboration with Canada Service Corps, is a 20-week program that provides youth with the necessary mentorship, funds and skills to shepherd a community-focused project to life. Over the course of two years, RISE plans to develop 25 of these projects across the country, in Edmonton, Iqaluit, Ottawa, Montreal, Toronto, Winnipeg, Halifax and Vancouver.

‘Concordia opened my mind to what I could do’

Loutfi says two specific experiences at Concordia taught her the leadership skills she uses at Apathy is Boring.

One was the knowledge she gained as a coordinator for Concordia’s Art Matters Festival, the largest student-run art festival in North America.

“That was my first experience running something, overseeing a budget, doing event planning and being in a leadership position,” says Loutfi. “Art Matters gave me a lot of skills and opened my mind to what I could do.”

As an art history major, she also took a class with Heather Igloliorte on Inuit art history that taught her a valuable lesson on the importance of partnerships.

“It was a really eye-opening course on life in the North and what it’s like for Indigenous people in Canada — and the relationship between settlers, immigrants and Indigenous folks,” she says. “Learning this through the art practice in the North was pretty important for me.”

In Loutfi's eyes, her designation this month as a top “woman of influence” by the respected Canadian organization of the same name is a group effort.

“The recognition is a reflection of what we have achieved over the last year,” she says. “It’s a great celebration of the team’s work.” 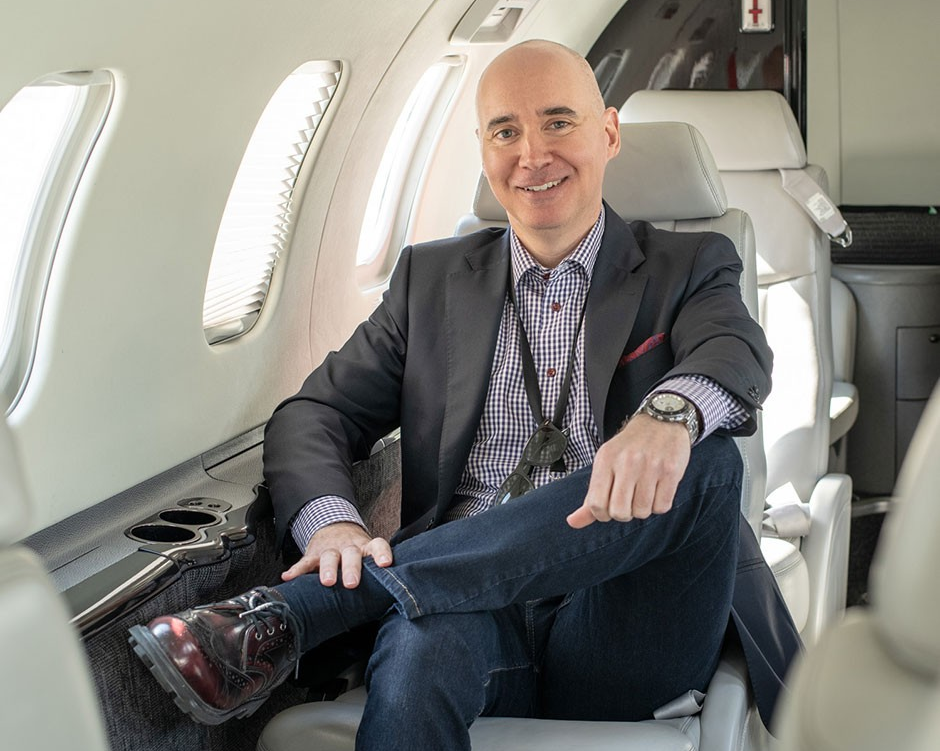 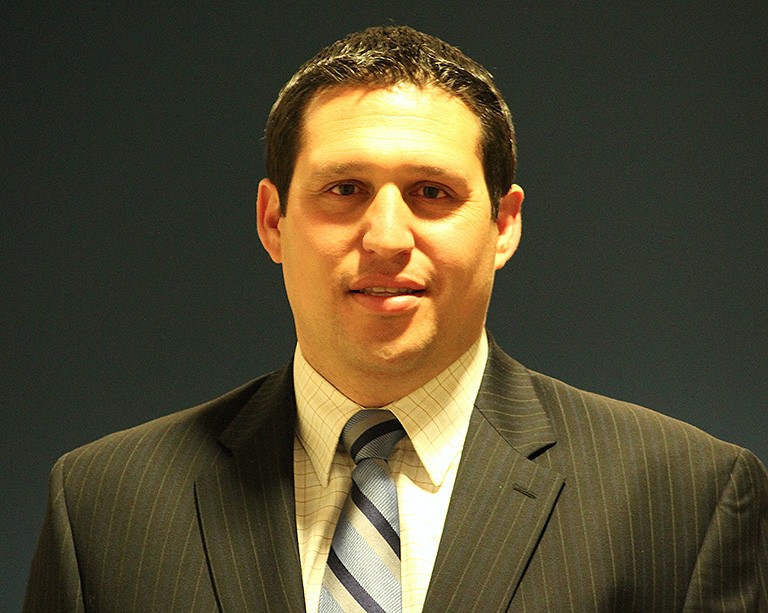 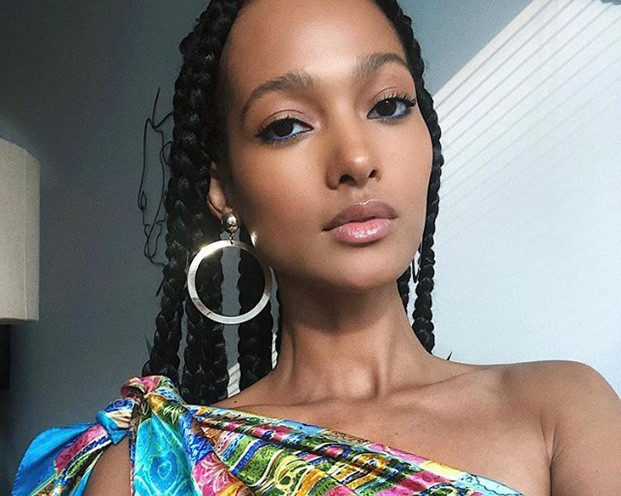