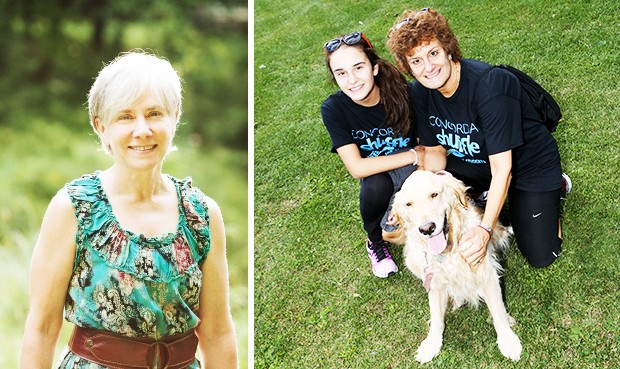 From left: Liselyn Adams, and Julie Blumer with her daughter Olivia and the family dog, Mylee.

Concordia is hosting a special farewell event on May 23 to recognize 109 employees who are leaving the university this year after applying to the Voluntary Retirement Program (VRP).

The university made the program available to eligible full-time faculty and staff members as part of a plan to help preserve its long-term financial sustainability.

In anticipation of the occasion, we are profiling Concordians whose dedication, service and achievements are representative of this year’s many VRP participants.

The students call her “Grad Mom,” and send her cards, wedding photos and pictures of their kids. Julie Blumer will be missed when she retires in December after 40 years at Concordia.

“I love dealing with students. It gets to the point where they really confide in you,” Blumer says.

“I get to see it all — from the romances to the marriages, to when they have children. I’ve always had an open-door policy. I may be retiring but the connection with the students is still there.”

Before taking the position in 2001, Blumer spent 25 years in the registrar’s office, primarily as the secretary to three successive registrars.

“We were a close-knit family,” says Blumer. “Many departments had merged, including admissions, scheduling, records, the academic calendar and transcripts, so I got to do a bit of everything. I particularly liked working at the graduation ceremonies.”

Blumer started at Concordia in 1976, working a part-time night shift at the bookstore during the September and January rushes. Then she heard about an opening in the transcripts department on the Loyola campus.

She was hired for the full-time job in May 1977, just before transcripts merged with the registrar and moved to the downtown campus.

“Back then, transcripts were typed out manually,” she recalls. “We filed them in these big vaults, in huge filing cabinets.”

Blumer met her husband, Victor Francisco, who worked security at Concordia, and they now have a 14-year-old daughter, Olivia.

This September, Olivia accompanied her mother on the 2016 Concordia Shuffle, along with the family dog, Mylee. “I’ve done the Shuffle every year since it started,” says Blumer. “It’s important. It’s for the students.”

In April, Blumer received a CCSL Outstanding Contribution Award from Andrew Woodall, dean of students, at a ceremony in the Loyola Chapel. “I was so touched,” she says. “Four graduate students nominated me.”

When she retires, Blumer plans to spend more time exercising at the PERFORM Centre, where she goes nearly every day after work. She also plans to volunteer at the hospital, visiting with her dog.

In 1980, American flutist Liselyn Adams found herself at a professional crossroads.

She could either continue the audition process to play second flute with the Montreal Symphony Orchestra, or she could accept a full-time teaching job at Concordia.

“I decided to drop out of the audition, and I’m really glad that I did,” says Adams. She retires in May, after 37 years as an associate professor in the Department of Music.

Accepting the position at Concordia meant that Adams was able to play and teach small ensemble music and chamber music. “In an orchestra, you don’t get to choose what you play or how to play it,” she says.

“Concordia gave me that freedom. Plus, I absolutely love working with students.”

Adams points out she was only 26 years old when she started at Concordia. “I was close in age to the students, and I was the only woman in the department for 10 years. I had to stand and deliver.”

When Adams started at Concordia, the university was a hub for the city’s early music scene, in which Classical and Baroque music is played on original instruments, as intended by the composer.

She first taught Baroque flute, but over the years pivoted toward contemporary music, teaching performance, music history, and some harmony and ear-training courses.

In 1989, Adams put together a group of professional musicians from across Canada called the Blue Rider Ensemble, performing contemporary music and collaborative improvisation-based composition — large staged pieces with a theatrical component.

“The collaborative aspect was influenced by being at Concordia, where we’re within the Faculty of Fine Arts, not just a straight faculty of music,” says Adams. “Concordia started doing cross-arts practice earlier than most places. That paid off because now it has become almost mandatory.”

On top of being a working musician and associate professor, Adams contributed to the administrative functioning of Concordia. She was the graduate program director from 1996 to 2001, overseeing a diploma in advanced performance.

The same year she left that position, Adams took a three-year post as the associate dean of Research and Graduate Studies at the Faculty of Fine Arts.

Then in 2004, she became the university’s first associate vice-president, International, a position she held for six years before returning to the music department as chair.

“Being chair was the most challenging position of them all,” says Adams. “We were combining our areas more, so that a jazz student, for example, could take a contemporary performance class. We made the boundaries more open.”

The department also began doing more collaborative work with theatre and dance, and students were encouraged to perform off campus.

For her last year at Concordia, Adams was on sabbatical, doing research creation with her ensemble. In March, they premiered five new commissions, in Toronto and Montreal.

“At Concordia, I was in control of my life as a performer,” she notes. “I had the freedom, colleagues, and time to research, collaborate, and record.”

But for Adams, the main draw was the students.

“I love teaching at this level. It’s so rewarding,” she says. “We get interesting students, and they really change over the three years. I see them become more assured, technically and expressively. I love helping them discover their voice, where they fit in.”