‘A searing, original and morally engaged study of violence’ 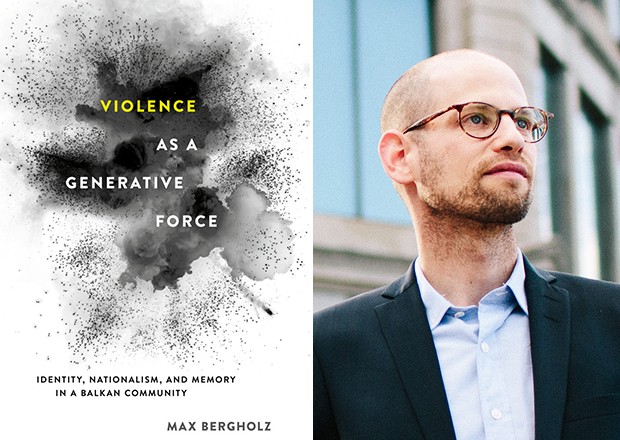 These are the central questions posed by Concordia’s Max Bergholz in Violence as a Generative Force: Identity, Nationalism, and Memory in a Balkan Community. The book recently won the 2017 Joseph Rothschild Prize in Nationalism and Ethnic Studies.

Sponsored by the Harriman Institute at Columbia University, the award is presented annually to an outstanding book on Russia, Ukraine, the Caucasus, Central Asia/Turkey, Central Europe or the Balkans, in which substantial attention is paid to questions of ethnicity and/or nationalism.

Bergholz is an associate professor of history in the Faculty of Arts and Science. He collected his award on May 6 in New York City during the Association for the Study of Nationalities (ASN) World Convention.

The ASN described Bergholz’s work as “a searing, original and morally engaged study of violence in southeastern Europe during the Second World War.”

“My book tells the story of extreme violence and unimaginable human suffering in a largely unknown corner of the Balkans,” Bergholz says. “I am thrilled to have been awarded the prize, which calls attention to this traumatic local history.”

For Peter Gossage, chair of the Department of History, the book is a testament to Bergholz’s use of state-of-the-art, empirical research.

"Max Bergholz poured thousands of hours of archival research, analysis, and careful writing into this big, important book," he says.

"So it's incredibly satisfying to learn that his efforts and insights have been recognized with this major international award. Our department is extremely proud of Max and of everything he has accomplished since arriving at Concordia in 2011. And we're convinced that this is only the beginning."

The following is a blog post in which Bergholz describes his experience doing field research. It was originally published in Sage House News. 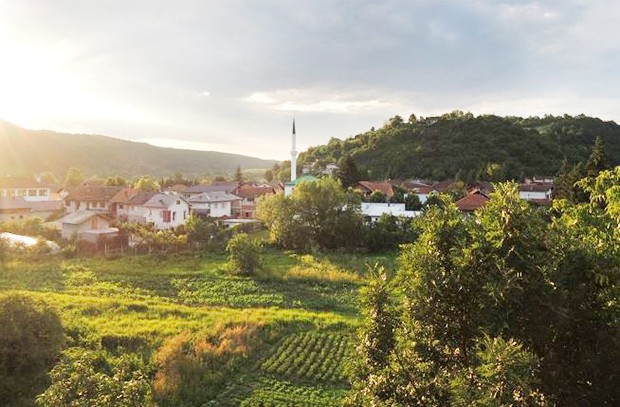 The town of Kulen Vakuf, site of mass killings in 1941. | Image courtesy of Max Bergholz

Max Bergholz: Archives in Bosnia in minutes and hours

“You have 15 minutes to look around. After that I’m going for coffee with my colleagues, and besides, God save me if someone found out I let a foreigner down here!” These words — spoken to me on a September afternoon in 2006 by an archivist in Bosnia-Herzegovina — marked the moment my book began.

I was in one of the archive’s basement storage depots. Many of the light bulbs were burned out, while a handful of others flickered. The impatient archivist handed me a flashlight, and pointed me down a dark set of shelves. “I think what you’re looking for might be down there,” she yelled just before exiting the depot. I stood in silence for a moment, and then switched on the flashlight. After 10 minutes of straining to read the handwriting on filthy, uncatalogued stacks of blue folders, my eyes froze on these words: “Sites of Mass Executions.”

I grabbed the documents, turned off the lights, and climbed the stairs back toward the reading room. When the archivist returned from her coffee break, she handed me a rusty knife to cut the fraying twine holding the blue folders together and then walked off. After taking a few steps, she paused, turned around, and then offered me an old baby T-shirt to clean the documents.

During the next hour I read reports about a small Bosnian community that I had never heard of called Kulen Vakuf, located on the present-day border between northwest Bosnia and Croatia. In the summer of 1941 much of its multi-ethnic population had become both perpetrators and victims in a series of massacres that swept thousands to their deaths. Some were shot to death; others were butchered with farm tools. Some were drowned in the emerald green waters of a local river; others were thrown into the darkness of deep vertical caves. For decades after the war, residents had remained silent about what happened in 1941. 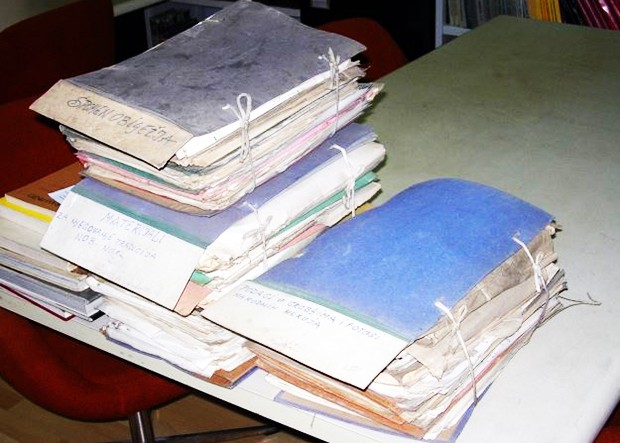 The blue folders discovered in an archive's storage depot in Bosnia-Herzegovina. | Courtesy of Max Bergholz

The documents offered only a glimpse into this terrifying and perplexing story of a community’s collapse into intercommunal violence. But they also gave me the feeling of cresting a sand dune and gazing out on the wide ocean. I could almost feel a warm breeze picking up speed behind me. And I wanted to raise the sails of my imaginary ship as fast as possible, and pursue the story whose tantalizing outline I could already sense protruding in that stack of dusty papers.

Yet to tell this story, I needed to work in the local archives that could shed more light on this history of violence and silence. Two years later, in September 2008, after several unsuccessful attempts to secure permission to research in the provincial archive that held the materials for the Kulen Vakuf region, I finally managed to enter its storage depot. At the entrance I was given a set of instructions. “You have two hours to look around!” the archive’s director shouted at me from his car. “No more! I’m going to lunch now with some out-of-town guests.” He stepped on the gas and sped off.

I stared into the depot. It was filled with huge mounds of papers, books, folders and boxes of what were once catalogued documents. The materials looked like they had been dumped there. There were no shelves, was no order. A team of physically fit movers would need days — if not weeks — to stack and sort these tons of papers. I had two hours. I slowly walked around the pile several times in dumbfounded silence, oblivious to the fact that I was wasting precious minutes.

I began frantically to move what I could from one side of a huge mound to the other in search of materials related to Kulen Vakuf. An hour passed: nothing. Thirty more minutes: nothing. My back ached and I coughed nonstop from the dust. My hands were black. With about 20 minutes to go I found the first box, which sent a feeling of electricity pulsating through my body. Then I found another, and another, and then another. Soon I had stacked nearly 80 together. I stared at them as if I was looking at gold discovered in the mountains.

The director of the archive then returned. After seeing that I had actually found something, which meant I would be staying to work in his archive, he began cursing me — and all my female relatives — in the most colourful Bosnian expletives I had ever heard. It took several weeks of struggle with him, as well as with the local authorities, before I finally received approval to read these materials. Ultimately, the fight was worth it. The documents from deep within the mound formed the backbone of my book.

During my doctoral studies, and later as an assistant professor, I spent years mastering historiographies and languages. But it was in the field — in the basements and storage depots of dusty Bosnian archives — where I learned something that universities don’t really teach. This is the importance of capitalizing on small windows of opportunity to literally grab hold of the past, which sometimes unexpectedly opens up, and must be seized immediately, or perhaps lost forever.

My long years of formal training in the discipline of history did help prepare me to take advantage of these situations. And, of course, most of my fieldwork during the ensuing years that it took to research and write my book involved long tedious hours of reading the documents I found, sometimes with little to no yield. But it was a sense of momentary intuition in the archive’s basement that inside those blue folders was an amazing story waiting to be discovered — along with a readiness to move hundreds of boxes when given the chance — that made it possible to raise the sails of my ship, get out on the ocean and begin my journey to tell the story of Kulen Vakuf. In retrospect, after 10 years of work, 15 minutes in a filthy basement and a backbreaking two hours in a dusty storage depot made all the difference in the creation of this book.