Concordians co-founded Partage Montréal to connect buyers and creators. On Nov. 20, find out how it works
|
By J. Latimer 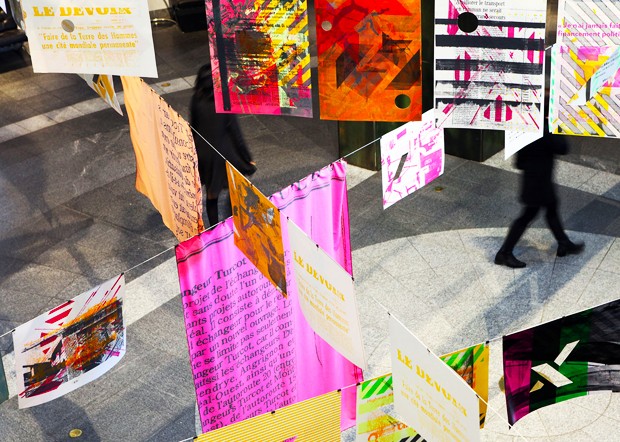 It’s like signing up for a basket of locally grown vegetables — except you get art instead of leafy greens, sight unseen.

On November 20, Partage Montréal is throwing its third “pick-up party.” Thirty subscribers who have paid a $440 subscription fee each get six pieces of original, limited-edition art to add to their collections.

Friends can split the cost of a subscription and divide the art among themselves. A curator is selected by a curatorial committee each season to pick the six artists and provide a theme or guidance.

Wesley sent each one of them the same image of an abstract design painted on linen by British Bloomsbury Group artist Vanessa Bell, the sister of Virginia Woolf.

“The artists are free to disregard the image, work with it, or against it,” says Wesley, an artist as well as a curator.

“Six very different artworks will emerge, from printmaking to jewellery, each potentially linked to a single image. I chose that image because I like the way it intersects between abstraction, painting, design, high art and utilitarian objects.”

Kraven’s piece for Partage is two overlapping portions of tinted vinyl, perforated by hand. It creates a “moiré pattern” — when there is an interference between two overlapping patterns and a superficial third pattern appears.

“It's a nice opportunity to experiment with a method, medium or format slightly different than usual,” says Kraven, who’s currently a visiting researcher at Concordia’s Milieux Institute for Arts, Culture and Technology.

“To make something small and relatively affordable allows for more people to collect my work.”

That’s exactly what the founders of Partage want — more collecting, more mingling. Partage started as an idea floated by Lampcov to her book club members and friends, who became the 10 founding members. They include art education specialist Lori Beavis (PhD 16), and Lampcov’s son-in-law Will Robinson (MA 12), a current Concordia PhD candidate in the Humanities.

“We researched other cities using the CSA model for art, including Brooklyn, Minnesota and Chicago, and knew it was a good fit for Montreal,” says Robinson, who is part of Concordia’s Centre for Technoculture, Art and Games (TAG).

Robinson adds that there are still snags, such as "getting the word out."

Still, Partage has been successful, selling all subscriptions for previous seasons since launching in fall 2015. There are only a few subscriptions still available for season three. A sizable 60 per cent of the funds go directly to the artists.

Only one question remains: Who would pay $440 for six pieces of art they haven’t seen?

“It’s either a bit of a risk or an amazing deal!” says Lampcov with a laugh. “But it’s not quite 'sight unseen.' You know the names of the artists beforehand so you can look up their previous work. Plus, there’s a curatorial statement and you can see a selection of the artists' work on the Partage website.

“So far, we haven’t had any disgruntled subscribers — only fabulous surprises!”

Partage Montréal’s next art pick-up party is on Sunday, November 20, at the new Museum of Jewish Montreal between 5 and 7 p.m. Check the Partage Montreal event Facebook page for details.

Find out more about Concordia's Faculty of Fine Arts.