The mechanical and industrial engineering student took home second place in Canada with an inspired car-safety solution
|
By J. Latimer

Was it her poise? Her invention of a low-cost safety foam? Or her clever analogy to a certain French bread?

The 3MT Finals is a virtual contest run by the Canadian Association of Graduate Studies (CAGS), who select judges to evaluate videos by 11 regional finalists. Among them was mechanical engineering student Medina Ramirez.

“Several judges thought a story about mechanical engineering wouldn’t captivate them, but it did!” says Sally Rutherford, executive director of CAGS. 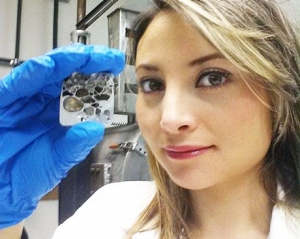 Medina Ramirez’s thesis presentation, "Production of Metal Foams Using Dolomite,” highlighted the safety application of a new metal foam that absorbs impact without shattering — like a baguette, not like a crumbling cracker.

“If I crush my foam, all the energy received from the impact gets trapped and dispersed,” explained Medina Ramirez during her video presentation.

Medina Ramirez is thrilled by her win on the national stage. “It’s super exciting! The other 10 videos were ‘winners of the winners,’ so they were all at a high level. The topics were varied, from an apparatus to help lungs breathe, to research into how people’s social lives are affected by the neighbourhood where they live.”

First place went to Gah-Jone Won of the University of Waterloo for his presentation, “The Development of an Antibody-Drug Conjugate to Specifically Target and Soften the Crystalline Lens.”

More than 3,800 people voted online for this year’s People’s Choice Award. The winner was Brock University’s Carly Cameron for her research on body image at the gym.

This was the third year running that a Concordian went to the 3MT nationals. Kristy Franks, a graduate student from the Individualized Program, competed last May and Sherin Al-Safadi went in 2014.

If you’d like to captivate next year’s judges — with or without a baguette analogy — Concordia's GradProSkills offers coaching and support for students.

Watch the 11 videos from the 2016 Canadian Three-Minute Thesis Finals.