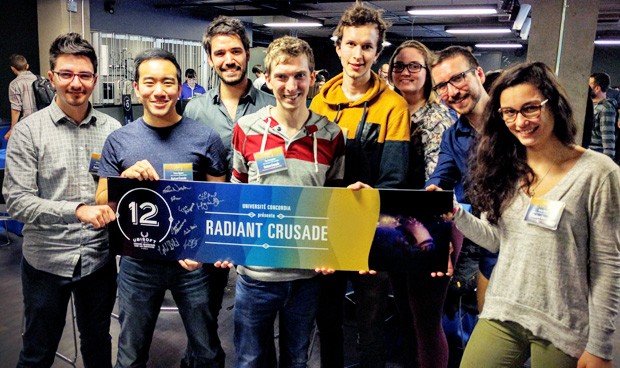 Seventeen teams of 135 students from 11 Quebec universities spent the last three months hard at work developing their first video-game prototypes, hoping to be nominated in one of eight categories in the 2016 Ubisoft Game Lab Competition.

The Concordia team found success — and took home $2,000. Composed of four artists from the Faculty of Fine Arts and four programmers from the Faculty of Engineering and Computer Science, the team won the Best Quality of the “3Cs” (camera, characters and controls) prize for their project, Radiant Crusade.

In this sixth edition of the competition, students accepted an assignment that mirrored the real-life production challenges at Ubisoft Montréal. Among them: the integration of game systems in which groups of objects must interact according to predetermined rules, a physics-related component and a component related to artificial intelligence.

“For us, the competition is both a direct way to hire local talent and encourage emerging professionals in the Quebec video-game industry,” says Cédric Orvoine, vice-president of Human Resources and Communications at Ubisoft Montréal.

“This year is no different. Because of the competition, the students now have real-world knowledge and production experience, which will go a long way when it comes to pursuing their passion.”

The goal of Radiant Crusade is to defend a tower at the centre of the world and attack monsters trying to destroy it.

The team interpreted this year’s theme of ocean as an ocean of darkness, creating a world of plants and creatures that live in an environment devoid of light.

“Most organisms in our game are bioluminescent,” says the team's leader, Étienne Legault, a computation arts student. Bioluminescence is the emission of light by a living organism, such as a firefly.

The technical challenge for the team was designing two parallel systems: a light system and a creep system. The light system controls the brightness level of the world, as well as the player's health. The creep system creates monsters that attack both the tower at the centre of the world and the player's avatar, stealing light it needs to navigate.

The award-winning feature of Radiant Crusade is the most complex element of the game: the camera control.

Players can move the camera freely around the avatar in full orbital mode to see the world around them. As soon as the avatar is on the move it automatically redirects to follow without additional effort from the player.

The look of the character, a mechanical and biological hybrid creature, as well as the only car-like avatar in the competition, made it stand out from the others.

Players manipulate the avatar using intuitive controls that allow for complex interactions within the world of Radiant Crusade. They choose from three different attack styles and have access to three types of weapons to counter enemies. Each attack combination allows for a different effect that is best suited to a specific situation.

Legault is an aspiring art director, an award category the team was nominated in. He found the Ubisoft competition the ideal space to work on his concept art skills and develop 3D modelling.

“My main takeaway from this experience has been the power of collaboration and communication within our team,” he says.

Interested in studying video-game development? Find out more about Concordia’s Department of Design and Computation Arts and the Department of Computer Science and Software Engineering.