As local jazz pianist Oliver Jones pays tribute to his mentor at Concordia, here's the story of their lifelong friendship
|
By Tom Peacock 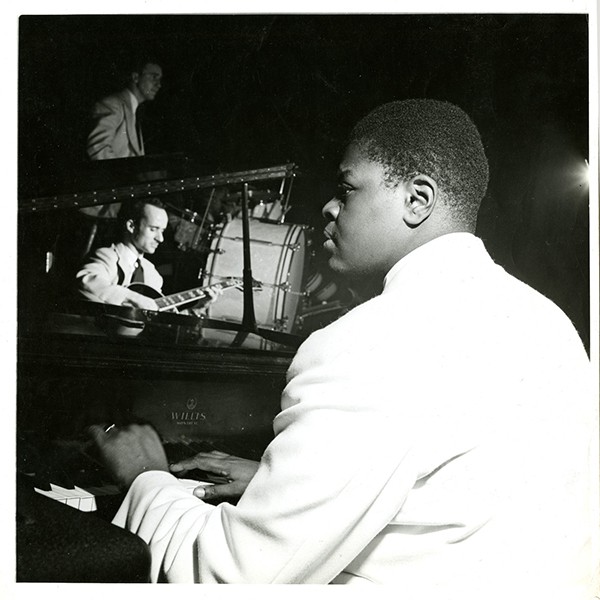 Oscar Peterson with the Johnny Holmes Orchestra in 1946. | Courtesy of Records Management and Archives

Tonight, to commemorate what would have been Oscar Peterson’s 90th year, Montreal jazz great Oliver Jones is taking to the stage at Concordia's Oscar Peterson Concert Hall to pay tribute to his dear friend and mentor.

Growing up in Little Burgundy, close to Oscar’s family home, Jones honed his craft under the tutelage of Peterson’s sister, Daisy, a respected piano teacher.

He often bumped into Oscar, who was several years older and already touring with the likes of Ella Fitzgerald and Dizzy Gillespie.

“Oscar Peterson encouraged me,” Jones told The Globe and Mail in a 2013 interview. “You couldn’t get any better than that, and it’s because of him that I became the musician I did.”

The two played together publicly for the first time at the Montreal International Jazz Festival in 1988.

Five years later, Peterson suffered a stroke. He gave Jones 26 compositions that he hadn’t yet had time to record. Since then, Jones, whose own stellar career was honoured with a commemorative stamp from Canada Post in 2012, has recorded or played many of them.

Tonight, Jones’s trio will play some of the remaining, never-before-released compositions, as well as many of his old friend’s favorite musical selections. He’ll also treat guests to a segment of special requests.

Peterson got his first big break in 1942, at the age of 17, when Montreal bandleader Johnny Holmes hired him to play with his famous orchestra. Recognizing Peterson’s talent and his ability to draw crowds, Holmes began billing his band as “the Johnny Holmes Orchestra with Oscar Peterson.”

Three years later, Peterson signed his first recording contract; he went on to become one of his generation’s most accomplished jazz pianists, as well as a respected teacher and composer.

The Johnny Holmes Fonds – donated to Concordia by the bandleader in 1986 to the Jazz Fonds and Collections in Records Management and Archives (RMA) – contains several rare photos of a young Peterson playing with the Johnny Holmes Orchestra.

They also provide information on jazz in Montreal during the 1950s and 1960s, as well as music that Holmes arranged and conducted, audiotapes of CBC radio broadcasts, press clippings and other photos of performers.

In 1979, Concordia awarded Peterson an honorary doctorate; and in 1997, he received the Loyola Medal, the university’s highest honour.

The concert's proceeds go towards the restoration of Peterson's birthplace in Little Burgundy and the installation of an elevator at Union United Church, home to Canada's oldest black congregation. To purchase tickets, call 1-855-790-1245 or visit admission.com.