What's in a selfie? 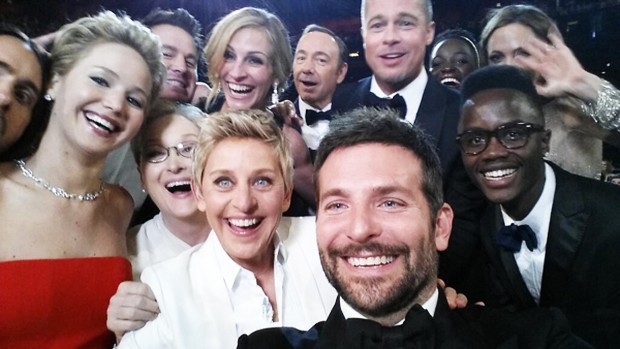 Ellen DeGeneres' Oscar selfie is the most-retweeted picture of all time — a feat it achieved in just one hour.

Ann-Louise Davidson is an associate professor in Concordia's Department of Education. She originally published a longer version of this blog on LinkedIn.

If you haven't heard the word "selfie" by now, it's either because you are living in an isolated part of the world with no internet connection or haven't yet discovered the existence of social networks.

But while you might be enjoying a world that is not yet invaded by 3G/Wi-Fi, a sizeable proportion of the connected population is taking billions of daily pictures with their intelligent phones. In fact, in any highly touristic area, you will find that selfie sticks have largely replaced the traditional trinkets sold by street vendors.

Does taking a selfie mean you are crazy?

As I started writing this blog, I was sitting in a café on the famous Champs-Élysées, observing tourists from all nations posing for phones attached to the end of these extendable sticks. I couldn't help but think that whoever thought of the selfie stick had a stroke of genius.

While "selfie" may have won the word of the year award in 2013, the act of taking selfies is being linked to mental illness, narcissism, psychopathy and addiction by psychiatrists. 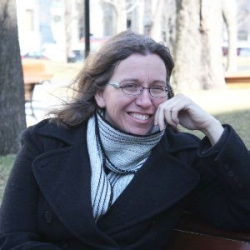 Sure — there are some extreme cases like that of British teenager Danny Bowman, who spent 10 hours a day taking selfies in his quest for perfection and comments.

But I would be dubious if someone said that taking selfies was the cause of his behaviour. I would argue that his inherent vulnerability manifested itself through the enabling conditions created by the digital device and the Web 2.0-pervasive technology that backs it up — but that is not the road I want to pursue here.

Instead, I want to reflect on the very act of taking a selfie. Undoubtedly, selfies are meant for social networks, but I largely disagree with the generalizations about the links between selfies and mental illness, narcissism, psychopathy and addiction.

In my research methodology class at Concordia, the most basic element that I teach to students when I enter in the correlation chapter is that correlation is not causation and one must interpret carefully. This is not what is being done by the general public who reads these popular articles on selfies and narcissism.

On selfies, portraits and self-portraits

I must confess: I do take selfies. I usually don't post them to social networks, unless I know they will generate a conversation.

I am too busy to do my hair every day and the smell of makeup makes me sick. Even as a teenager, I was never one to spend any time or money on beauty products. I was busy making things, creating, reading, and imagining a better world.

I did try to take selfies on numerous occasions with 35mm cameras and they were never really successful. I was never able to get the right angle, the right distance, the right framing, the right effect and I was limited to 24 pictures that took one week to develop. I fondly remember my excitement as a first-year fine arts student in university, when I realized I had access to a dark room where I could develop film. I took photography in parallel to studio arts; one professor encouraged us to spend one year on the self-portrait.

Truth be told, the portrait and the self-portrait are two genres of art that have been extensively studied by art historians and art critiques. There was a time when the only way to leave a legacy of one's facial traits or physical stature was to commission an artist to paint a portrait as accurately as possible.

I remember studying Spanish painter Diego Velázquez's Las Meninas closely because I found it rather odd that a painter would depict himself and his canvas along with members of King Philip IV's royal family.

Studying Las Meninas meant going above simply stating that it was a complex and enigmatic composition. It implied that I looked at the painting in various books and slides and read all I could read about it, including books on the history of art and books on the interpretation of Spanish art.

Some criticized Velázquez's decision and some covered Philip IV's family with ridicule, but others offered a deeper analysis using intertextual inferences of what was going on at the time in Spain. I appreciated being offered a wider angle — I started looking at the painting as if it offered me a window into history.

I could look at a frozen moment, as depicted by the artist, who was obviously well educated and was a member of King Phillip's court. At that very moment, I started appreciating art, especially portraits and self-portraits, very differently.

Much can also be said about painters who used the self-portrait after the advent of photography.

At the time, painters were going through an identity crisis and started pushing the boundaries of the medium. Vincent van Gogh, for instance, painted his self-portrait dozens of times. While some critics dismiss van Gogh's creative genius because of his insanity, his self-portrait titled Man Without Beard is now part of the list of the world's most expensive paintings.

How I explain my own selfies

In the past few months, I visited several museums and I have taken a considerable amount of selfies while looking at artwork with the ambition of sharing the best ones on Facebook.

Even with my iPhone's front-facing camera, taking a good selfie takes time. I shoot hundreds during each visit and I carefully analyze which one might generate interesting comments.

Interestingly enough, I am not looking at which one makes me look better than I usually do. I try to open a conversation between the art piece and my social network through the mediation of my expression.

It is, in a way, an approach to making a secular visit open, a way to get people to interact with art, a way to make museum collections participatory and more accessible to people who cannot visit them. Even if people write "lol," I consider it to be a reaction to a discussion that extends my visit outside of the museum.

Jean Dubuffet, André Dhôtel and I

While visiting the Centre Pompidou in Paris, I took a selfie with Jean Dubuffet's painting Dhôtel nuancé d'abricot.

As an art student, I was always fascinated with ferocious depictions and exaggerations of expressions. I was often criticized by the violence present in my paintings, although I am not violent in nature. I love to add more to stories and to people's expressions. This is partly why the rough, unfinished impression of Dhôtel's portrait has always fascinated me.

I stood in front of it for a long time to see if I could set myself up for a selfie. I was there on a Sunday and the entrance to the museum was free, so there were a lot of people and it was impossible to be alone with the painting for more than 10 seconds at a time. 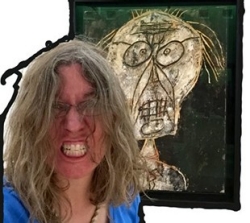 I tangled my hair several times, squinted until my face turned red and tried a first selfie. I tried to match the lines in Dhôtel's face. Some lines fit more naturally than others, but there were some differences.

He had almost no hair, I had lots. He wore round eyeglasses; mine were more like ovals. Still, I managed to get some resemblance.

I tried to frame my picture differently, I changed hands, I used my headset as an extension of my phone to make my shoulders look more natural. Some Asian teenagers were laughing at me in the corner of the room. They took pictures of me taking my selfie, so as you read this, I might be the subject of a social media conversation somewhere else in the world.

One woman touched her husband's arm, pointed in my direction and put her hand over her cheek as a gesture of disapproval. She couldn't believe I was messing up my hair more. I read her lips and tried not to giggle, as I wanted to look angry.

At that point, all I wanted was an expressive selfie to share with my social network and I didn't care about who was looking at me in this public place. I had already shared too many traditional pictures of Paris that could be found elsewhere on Flickr and Google Earth and I wanted to offer something special.

I also wanted to share Dubuffet's painting with some kind of expression that enhanced his love of grimaces and distortions.

All facts considered, I know why I take my selfies.

No, I don't take them because I am a narcissist. I could opt not to take any selfies if I wanted to, so I don't feel as though this is an addiction. All I want to do is to engage people in conversations.

I like to create movement, to cause reactions, to show people what they might have not seen yet or even better, if they have seen what I am showing, I like to express my thoughts without words and let people co-construct the meaning of my expressions.

It is somewhat ironic that as I feel pressed to publish this blog to break the stereotypes that correlate selfies to mental illness, I am reading about a contemporary artist named Milo Moiré who just got arrested on the Place du Trocadéro in Paris while taking naked selfies.

On one hand, I am thinking she will likely pay the price in the French court for trying to make a statement, but the very fact that she is using the selfie as a mode of expression is quite meaningful to me.

On the other hand, I am glad that my personal interest shifted from arts to learning. Rather than taking risks to make a statement, I simply have to defend that we might have something to learn about taking selfies.

Indeed, my mind is already tackling the next curve on the research racetrack trying to formulate questions related to understanding learning, living, working and playing with and through the act of taking selfies.

And for the record, when my eight-year-old nephew saw my selfie with Dhôtel's portrait, he said: "Wow! Ann really did the same thing as in the painting!"

I'm glad that I was able to convey the same expression as Dubuffet's paintbrush. This confirms that I am able to act and put myself to the test even in the public sphere. At least I earned points for that!