Convocation 2015: ‘We need your help to build a better world’ 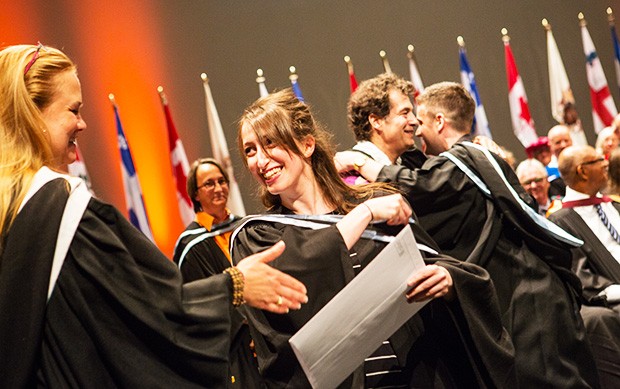 At spring convocation on June 8, 9 and 10, Concordia’s president Alan Shepard joined honorands and valedictorians in offering his best wishes to the class of 2015.

“If you think back to the person you were when you started your university studies, you’ve probably changed a great deal,” he said to the university’s 6,000 newest graduates.

“Like Concordia, you’ve evolved. You know best the value of the education you’ve received, and I hope you’ll tell others.”

Eight valedictorians provided sage advice. In his Arts and Science address, David Demers — who decided to resume his studies after an optic neuropathy left him legally blind six years ago — recalled challenges ranging from learning how to ride the bus again to following what was being taught in his classes.

“I told myself that if I can do this, I can do anything,” Demers said. The double major in Community, Public Affairs and Policy Studies and Philosophy wound up graduating with distinction.

“I hope, standing in front of you today, I can serve as a reminder that we can overcome even the most daunting of struggles.”

Christiana Figueres, Concordia honorand and executive secretary of the United Nations Framework Convention on Climate Change, addressed the Faculty of Arts and Science via a video feed from Bonn, Germany.

“There has seldom been as much opportunity for innovation,” she said.

“The dedication, work ethic and intellectual talent that brought you the success we celebrate today is a crucial component of the solutions needed to meet the climate change challenge and usher in a new era of sustainable, responsible growth.”

Governance expert Anne-Marie Hubert, who has dedicated much of her career to promoting the advancement of women, minorities and diversified profiles, spoke to graduates from the John Molson School of Business (JMSB). She emphasized the importance of recognizing how lucky they are to have received a post-secondary education.

“It’s equally important to understand that not all have the same privilege,” she said.

“Our generation has not yet succeeded in creating a society where everyone can contribute to their full potential. Together, with your generation, we can make it better. We need your help and skills to build a better world.”

In his speech to the Faculty of Arts and Science, journalist, educator and First Nations activist Kenneth Deer recalled how difficult it was for him to make his way in the world without a university degree.

“I was put on the frontlines,” he said. “I wished I had had time to learn, but I didn’t. I had to learn by the seat of my pants.”

Deer, who worked at the United Nations on the development of the Declaration on the Rights of Indigenous Peoples, told Concordia’s graduates to get out there and find a role to play.

“If you find that role, and you carry out that role to the best of your abilities, then you’ll find satisfaction. You’ll be able to breathe easier, you’ll be able to live a better life, and you’ll live in peace because you’ll have fulfilled what you believe you were created for.”

Entrepreneur and philanthropist Emanuele (Lino) Saputo recalled moving to Canada at the age of 15, and committing himself to building the family cheese business: “It started with $500 and a bicycle.”

The successful businessman said the secret to his eventual success was hard work and the support of the people around him, including his family and employees.

“You need to give them a sense of pride and ownership in the enterprise,” he said.

In his addess to Concordia’s Faculty of Engineering and Computer Science, solar energy pioneer K. G. Terry Hollands — a distinguished professor emeritus at the University of Waterloo — invoked the importance of being creative in the pursuit of scientific knowledge.

“Creativity has three stages: the struggling stage, the epiphany, and the commitment stage. We get the most pleasure out of the epiphany, but the overall process gives many rewards.”

Musician Angèle Dubeau played Fantasia No.7 for Solo Violin by Georg Philipp Telemann prior to accepting her honorary doctorate in the Faculty of Fine Arts on Wednesday. Two days earlier, her daughter Marie also received a degree, from the Department of Communication Studies.

In her words to the class of 2015, Dubeau likened convocation to a passing of the torch.

“I’m being honoured for my past achievements, whereas Marie — just like all of you today — received her diploma as a proof of her years of study, but mostly as a testimony of her potential for future achievements,” she said.

“You are our future. I warmly congratulate you and encourage you to follow your dreams.”

The official inauguration of Board member and alum Jonathan Wener as Concordia’s chancellor took place at the morning ceremony on June 8.

In his address, Wener underlined the importance of service to their community and fellow citizens. “Our backgrounds and circumstances may have influenced who we are, but we are all responsible for who we become,” he said.

“Define success by the degree to which you positively affect people in your lives. It is a sure path to measurable achievement and contentment.”