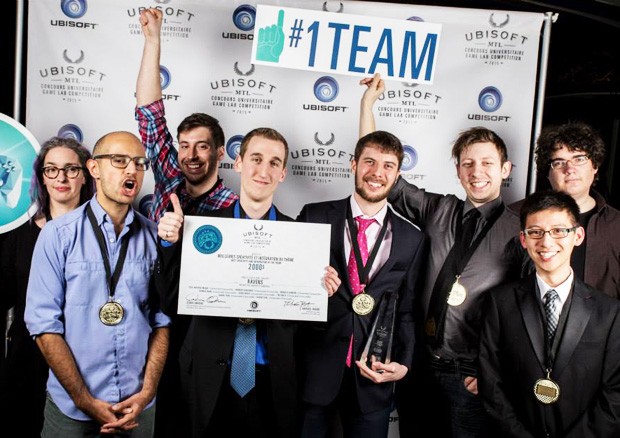 Thirteen teams of eight Quebec university students each had 10 weeks to produce a competition-ready, functional video game demo and present it to the company.

"This year, we imposed particularly difficult technical constraints to test the participants' limits," noted Raphaël Parent, president of the jury and programming project lead at Ubisoft Montreal. "Considering this challenge, I was very impressed by the quality of the prototypes... It was a close contest."

Ubisoft issued a laundry list of requirements: every video game entered into the contest had to be two-player; it had to have at least two different characters with different functionalities; and it had to fit into a particular theme. Fortunately, the company provided mentors to help the teams along in the process.

“It was actually quite a robust list of feature requirements,” says Tim Smith, the leader of the Concordia team that made Ravens, a game that follows the flight of two birds over a sombre landscape.

According to Smith, the point of the Ravens journey is that "all the light and colour has been sucked out of the world." The bird-players are responsible for finding a magical chain to restore the world to its former glory.

“Flight is not done a lot in games. That was our technical challenge,” Smith says. “I think we made a reasonably strong attempt.”

Ravens was strong enough for the team to be awarded Ubisoft’s “Best Creativity and Theme Integration” prize, which came with a $2,000 bursary.

Smith, a software engineering student with a specialization in game production, brought both programming and artistic skills to the team. About half of his teammates were from his program, and the other half were from the Faculty of Fine Arts.

Thomas Fevens, assistant professor in the Department of Computer Science and Software Engineering, and Jonathan Lessard, assistant professor in the Department of Design and Computation Arts, brought the team together. They also chose the members of the award-winning Concordia team that developed a game called Paradoxanity: Time Goes BOOM for the competition.

Paradoxanity: the secret of networking

Lessard describes Paradoxanity as a beat-’em-up game that pits a small group of protagonists against a never-ending stream of opponents.

“The Paradoxanity team was one of the most functional I’ve ever seen,” Lessard says. It won Ubisoft’s “Best Game Design” award plus a $2,000 bursary.

“The most difficult technical task was implementing and maintaining the game networking to allow multiple players. Adding networking to any game at least doubles the effort required to develop it,” says Paradoxanity team leader Felix Soumpholphakdy, an undergraduate student in the Department of Computer Science and Software Engineering. 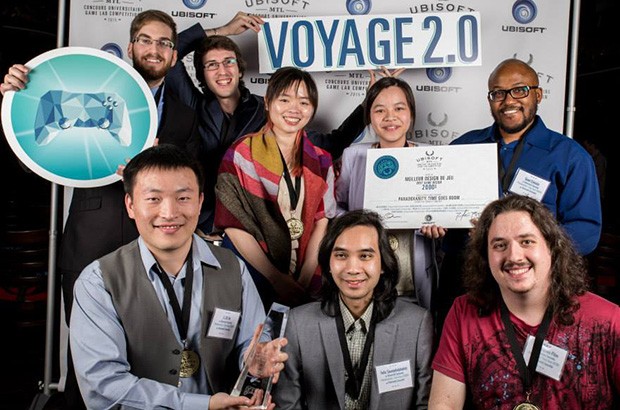 Computation arts student Milin Li designed all five of the characters in the game. She said working in a team environment was a confidence boost and helped make the laborious task of creating a game from scratch in 10 weeks more bearable — even if it was hard to get everyone together all at once.

“It was stressful but satisfying when the game was complete,” Li says. “As for the game itself, there is one part I really love. I might sound mean, but it’s when I hit the monsters off the edge of the platform. I can’t help [but] push all those little guys off.”

Another team made up of students from Concordia, Polytechnique Montreal and Université de Montréal took home the “Best Accessibility” award and a $2,000 bursary for the game Cheesy Journey.

'There were an awful lot of really good candidates'

Neither the Paradoxanity nor Ravens teams plan on doing much more with their games except perhaps polishing the demos and putting them online — though some say they would like to work with their teammates again.

The number of qualified students entering the Department of Computer Science and Software Engineering has grown exponentially over the past five years, and Fevens says choosing the team members was as difficult as it’s ever been.

“There were an awful lot of really good candidates this year,” he says, adding that he’d never before seen teams produce such polished games in so little time for the annual Ubisoft competition. “I found the games were very well done.”

Fevens hopes that other video-game companies will follow Ubisoft’s lead, and open up more competitions to allow gifted students to develop their game-creation and project-management skills.

Interested in studying video-game development at an undergraduate or graduate level? Find out about Concordia’s Department of Design and Computation Arts and Technoculture, Art and Games (TAG) centre.