Mehdi Sabzalian joined an A-team of international students. Together, they impressed a jury of industry experts
|
By Sara DuBreuil 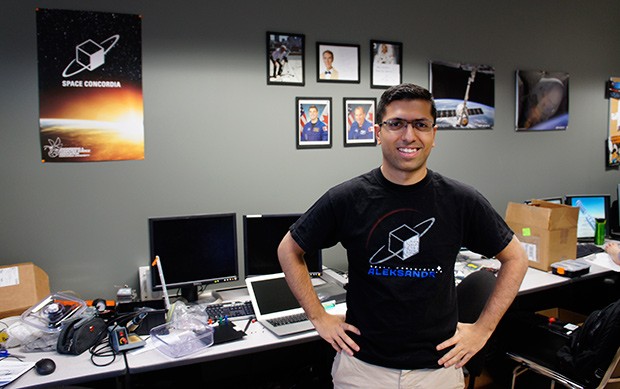 Only 32 students from among 240 international applicants were invited to this year's edition of the Caltech Space Challenge — including Concordia's Mehdi Sabzalian.

The 2015 Caltech Space Challenge takes place at the California Institute of Technology (Caltech) from March 22-27. Mehdi Sabzalian, a Concordia engineering undergrad, was one of just 32 students selected from among 240 international applicants — including master’s and PhD students from Stanford and MIT.

Divided into two multidisciplinary teams, students will be mentored by faculty from NASA’s Jet Propulsion Laboratory (JPL) at Caltech, the institution responsible for sending the Curiosity and Opportunity rovers to Mars.

At this year’s Space Challenge participants will put their heads together to design a manned mission to land on an asteroid brought into lunar orbit and extract the asteroid’s resources.

Does landing people on an asteroid sound like a Hollywood invention?

Not according to NASA, who hopes to send astronauts to an asteroid by 2025, and to orbit Mars in the mid-2030s. The Asteroid Redirect Mission has been proposed as a stepping stone to test the systems that will be required to send humans beyond the Earth-Moon system for the first time, turning science fiction into reality.

“Being an undergrad and having the chance to go to the Caltech Space Challenge is a huge deal for me,” says Sabzalian, who is busy brushing up on his knowledge of space mission design, remote sensing, orbital mechanics and the geology of asteroids.

“It’s a big dream of mine to be able to work at NASA one day.”