Does a digital-age journalism student have the edge? Ask the CBC 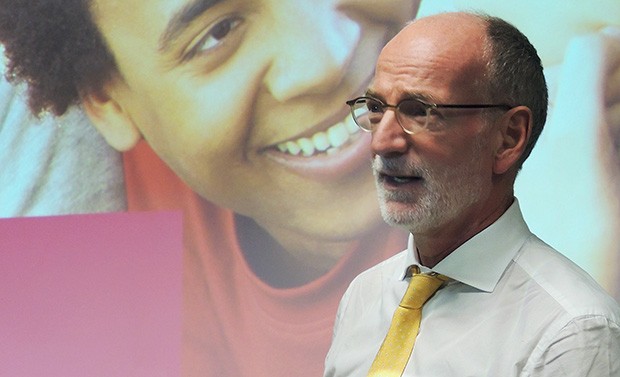 "We have data that shows that this generation does not trust corporations." Hubert T. Lacroix, president and CEO of CBC/Radio-Canada, at Concordia on January 21. | Photo by Sam Rancourt

What role should a national public broadcaster play in the future of journalism? Hubert T. Lacroix, president and CEO of CBC/Radio-Canada, addressed that issue for students and faculty members of Concordia’s Department of Journalism on Wednesday, January 21.

The internet has forever changed the Canadian broadcast environment, Lacroix explained, which is why the CBC/Radio-Canada now prioritizes digital content over radio and even television. This is despite the fact that 89 per cent of Canadians who own a TV set still spend 24 hours a week watching it. The CBC/Radio-Canada’s strategy, however, aims to reach young people who expect to instantly access media on multiple platforms.

Lacroix admitted the task is not an easy one.

‘‘We have data that shows that this generation does not trust corporations,’’ he said at the talk.

For Lacroix, the discussion at Concordia was an opportunity to interact with the millennials CBC/Radio-Canada needs to ensure its survival in the constantly changing media landscape.

When he asked the journalism students where they first validated information about the Charlie Hebdo attack, the initial responses were that they used social media and French television. In response, Lacroix said that social media is not able to provide the credibility and commitment to fact checking that CBC/Radio-Canada offers.

He added that the public broadcaster is the news organization at the centre of cultural, political, social and economic life in Canada — a statement that some of the students in attendance, like Celeste Lee, agreed with. ‘‘I still think the CBC is one of the most reliable sources of news,’’ she said.

Since 2008, Lacroix’s mandate has been to offer Canada high-quality programming that is created by, for and about Canadians. In a slideshow, Lacroix told the audience that 95 per cent of CBC/Radio-Canada’s primetime schedule is dedicated to Canadian content.

He also noted that international broadcast journalism would be limited in Canada without a public service. ‘‘At CBC/Radio-Canada, we have 23 foreign reporters,’’ he said. ‘‘CTV has five. Global has three.’’

Lacroix’s appearance at Concordia was part of a series of talks he’s conducting with groups of students around the country. Since September 2014, he’s held discussions in Toronto, Fredericton, Saint Boniface, Winnipeg, Moncton and Montreal.

‘‘Having the president of the CBC speak to the journalism students presented an amazing opportunity for them to direct questions to the one individual who can tell them what the future of Canada's public broadcaster will be,’’ says Brian Gabrial, chair of Concordia’s Department of Jounralism. Gabrial said that Concordia has never had such a high-level figure in broadcasting speak to the department before.

One student took the opportunity to question Lacroix on whether or not aspiring journalists still have a place at CBC/Radio-Canada. With plans to cut 400 jobs by the end of March and 400 more by March 2016, the broadcaster doesn’t always seem like a viable place of employment. But Lacroix affirmed that there will be jobs for new talents with a variety of tools in their arsenal.

‘‘The skills required for moving further on a direction led by mobility, internet and multimedia widgets are more obvious to the generation of people that lived with those devices,’’ Lacroix said. ‘‘Older generations of journalists don’t have that advantage."