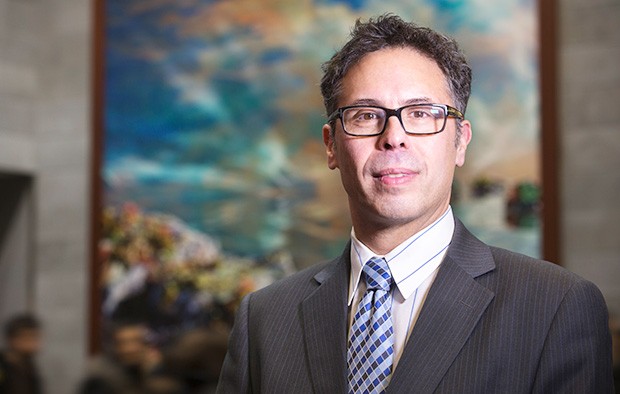 "Unique hallmarks": Clarence Epstein with "Seascape and the Sublime," 2005, by Holly King, in the Computer Science, Engineering and Visual Arts Integrated Complex. | Photo by Concordia University

Clarence Epstein, the senior director of urban and cultural affairs at Concordia, has been named to the Canadian Cultural Property Export Review Board (CCPERB). The appointment was made on the recommendation of Shelly Glover, the minister of Canadian heritage and official languages.

The CCPERB is an independent decision-making body. Its purpose is to encourage the protection and retention of cultural property in Canada in order to build and maintain the country’s artistic, historic and scientific heritage.

Epstein is one of three Quebecers on the CCPERB and is the only one who comes from a university. Chair Marcel Brisebois is the former director of the Musée d’art contemporain de Montréal, and Alain Lacoursière is a former police officer known for investigating art thefts.

Epstein’s appointment is a recognition of his expertise as an art historian and as a senior administrator with an extensive knowledge of the national and international art trades. He is also distinguished for his contributions to the study of colonial church architecture in Montreal.

Epstein is honoured to add work with the CCPERB to the many files for which he is responsible. “Our conscious effort at Concordia to recognize the interdependence of cultural advancement and higher education has become a hallmark of our institution,” he says.

He points out that Concordia is unique among Canadian universities in having a unit dedicated to cultural property management, urban planning, built heritage, public art, and museums and festival relations.

Epstein’s office has overseen an extraordinary range of dossiers since he began at Concordia more than 15 years ago. Some of them include: