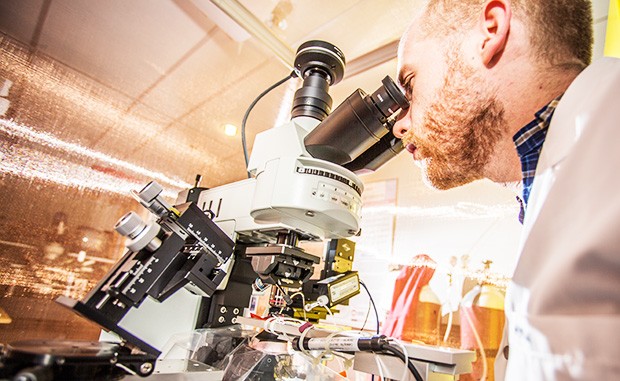 Concordia University has made some important inroads in the 2014 Maclean’s University Rankings released on October 30.

The university is now ranked 11th in a field of 15 “comprehensive” universities — institutions that have a significant amount of research activity and a wide range of programs at the undergraduate and graduate levels, including professional degrees. This is a gain of two spots from last year and the highest ranking since 2010.

One of the university’s strongest gains comes in the category “Medical/Science Grants,” with Concordia moving to 7th place from 10th. This category reflects the funding received from the Canadian Institutes of Health Research and the Natural Sciences and Engineering Research Council of Canada.

“We have been very bold in our grant applications, both on our own and in partnership with other universities,” says President Alan Shepard. “This is clearly paying off as granting agencies see the quality of our research and commit significant funds to support it. Congratulations to our research community for its efforts and successes.”

An example of such funding is that received by Jennifer McGrath in the Department of Psychology for a study looking at sleep and obesity in children and adolescents. As for partnerships, three Concordia researchers, Louis Behrer, Karen Li and Natalie Phillips are part of the recently created Canadian Consortium on Neurodegeneration in Aging.

The university’s commitment, through the Academic Plan, to substantially increase the library’s acquisitions budget was also recognized. In the Comprehensive category Concordia ranks 6th (up from 8th) in the percentage of budget dedicated to maintaining library services and 8th (up from 12th) in the funding directed towards increasing library holdings.

“Investment in our libraries is crucial to our mission,” says Provost Benoit-Antoine Bacon. “We need to further build a rich discovery environment and continue to expand our capacity to support both our students and our researchers. The upcoming transformation of the Webster Library is the next exciting step in this process.”

One category that relies on more subjective data is Reputation, and is based on a survey of opinion leaders’ views on quality and innovation. Concordia is ranked in 26th position overall out of 49. Particularly notable is the university’s increasing reputation as an innovator, placing us in 24th position out of 49.

The Maclean’s rankings are one in a series of such exercises conducted on an annual basis and the results show a steady upward movement for Concordia in many areas. “We are a university on the move,” adds Shepard. “We need to keep this momentum going and ensure our students continue to enjoy the best experience possible. They deserve it.”

Watch a time-lapse video that begins with sunrise at Memorial University of Newfoundland, and ends with the sun setting over the University of British Columbia. Concordia is featured to represent Quebec universities.