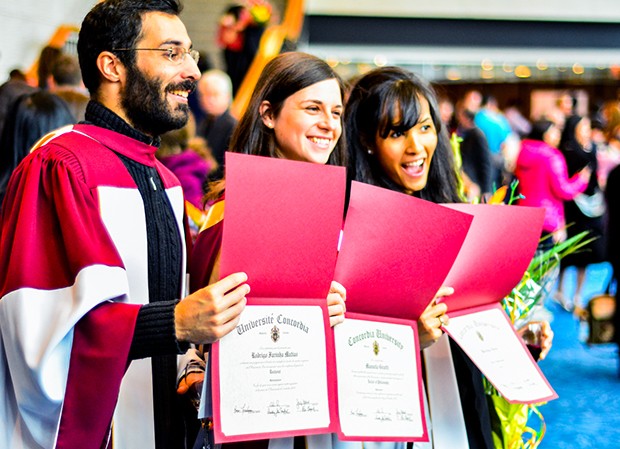 At three convocation ceremonies on October 28, Concordia’s president Alan Shepard joined honorands and valedictorians in congratulating the fall class of 2014.

Shepard spoke of how the graduates have grown, through their education, their interactions and the difficulties they have overcome.

“All change that is worth pursuing will present challenges,” he said. “At Concordia, you laid important groundwork for your future.”

More than 1,900 students from all four across the university’s four Faculties and School of Graduate Studies walked across the stage at Salle Wilfrid-Pelletier in Place des Arts.

At the Faculty of Arts and Science ceremony, while accepting an honorary degree on behalf of the congregation of the Sisters of Charity (Grey Nuns) of Montreal, Sister Jacqueline St-Yves told the graduates that they were meeting an important milestone.

“Over many years, you have had to find in yourself a strength, a discipline, as well as a commitment to share hard work to accomplish what you now celebrate,” she said.

“I have learned from those many who have gone before me and who continue to believe in me today. They are truly the wind beneath my wings.”

Karine Lalonde, the Arts and Science valedictorian, recalled the ups and downs she experienced during her 10 years of studies.

“Through countless failed attempts and stumbling blocks, I have come to the realization that failing is not the opposite of success,” she said. “It is, in fact, a requirement.”

Honorand Michael Sabia, the president and chief executive officer of the Caisse de dépôt et placement du Québec, spoke to the graduates of the John Molson School of Business about the financialization of the business world — a sector he said needs their talent, skills and imagination.

“You can make a difference by doing something real, by channelling your talents into the real economy. And if you do, our economy will be sounder, our society will be stronger and I believe your own lives will be richer.”

JMSB valedictorian Isar Kiani took a moment to congratulate her peers on their performance at “one of the world’s leading business schools.”

“The road ahead is full of challenges, but our future is bright,” she said. “Behind each and every one of us is the reputation of the John Molson School of Business and Concordia University.”

“You have your work cut out for you,” he said. “Democracy needs you.”

Khoa Luu, valedictorian of the Faculty of Engineering and Computer Science and Faculty of Fine Arts ceremony, concluded his address with a note of optimism.

“This university has taught us the elements of character that facilitate success. At Concordia, we are enriched in both knowledge and imagination.”