The changing face of fatherhood in Quebec 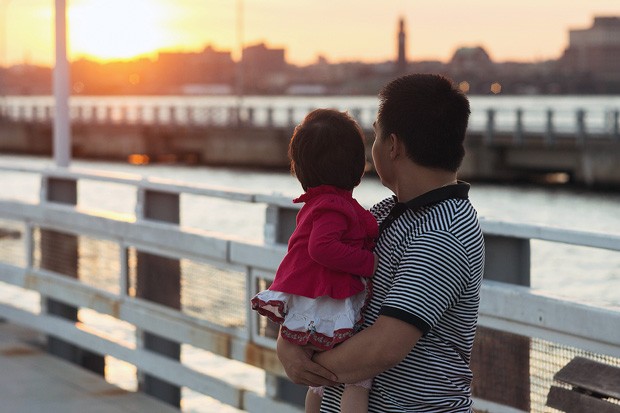 While men were still seen as breadwinners and disciplinarians in the 1950s, they took on a greater role in educating and nurturing their children. | Photo by Lynh Nguyen, Flickr Creative Commons

In North America, Father’s Day celebrations date to around 1908. But as Peter Gossage, professor in the Department of History, explains, the holiday only caught on in Quebec in the 1940s, after the Second World War.

French-Canadian culture had long linked fatherhood with authority. In the Catholic Church, for instance, the phrase le Père, French for “the Father,” denotes both the priest and the very notion of God itself. But as the imagery that Dad later inspired made clear, in the home he was more bumbling buffoon than fearsome figure.

“There’s so little discussion of Father’s Day until 1945, and then Quebec’s newspapers begin publishing all of these kooky articles about what they see as a novel American celebration,” Gossage says. “The advertisements around the holiday completely undermine the image of the powerful, disciplinarian father.”

Gossage would know. For the past six years, he’s studied what it meant to be a dad in Quebec during the first half of the 20th century. Earlier this year, he published an article entitled “Au nom du père? Rethinking the history of fatherhood in Quebec” in the American Review of Canadian Studies. And right now, he and Algoma University’s Robert Rutherdale, a leading historian of fatherhood in English Canada, are putting the finishing touches on a collection of essays on the history of Canadian masculinities that will include a chapter by Gossage on the history of Father’s Day in Quebec.

As a Quebec family historian, Gossage had long undertaken projects that used statistical methods to tease out information on 19th-century family life in the province. Yet as he began to move from a quantitative approach toward a cultural, qualitative one with a greater focus on gender identity, the father of two recognized that very little had been written about fatherhood in Quebec.

“Here was an area of historical inquiry that corresponded to my own experience, my family experience, my gender experience and my personal experience,” he says. “The question for me became: had fatherhood in the province modernized according to similar patterns American scholars had pointed out in the United States?”

As he discovered through the analysis of newspaper articles, autobiographies, court documents and more, the answer was both yes and no. In the U.S., for instance, Father’s Day gained momentum during the interwar period. “It was recognized by Calvin Coolidge [American president from 1923 to 1929],” he says. It didn’t seem to register in Quebec at that time.

Quebec’s Civil Code — which emphasized la puissance paternelle, or the power of the father — also shaped the idea of fatherhood in the province, underpinning a household hierarchy that placed unmatched power in the patriarch.

In the 1930s, though, in Quebec as elsewhere, a slumping economy left many men jobless, unable to uphold what was perceived to be their foremost responsibility: providing for their families. “If women are able to get work, does that mean that household roles will be renegotiated?” Gossage asks.

Perhaps. By the 1950s, while men were still seen as breadwinners and disciplinarians, they took on a greater role in educating and nurturing their children. This, Gossage says, also corresponds to the rise of the middle class, something that itself may be linked to declining birth rates in the province. At the turn of the century, Quebec families had an average of six to eight kids. As those numbers declined, the responsibilities associated with fatherhood shifted considerably.

Though Gossage’s research may stop in 1960, it is informed by the years that ensued, during which households became more egalitarian and the notion of le nouveau père, the new father, became a part of popular culture. Unlike the dad of yore, the new father shared the responsibility for breadwinning with his partner and might have even taken paternity leave to tend to a newborn child.

Ultimately, Gossage sees his work as a means of unpacking the past for those who may have a romantic view of what the family once was. Quebec household life might be difficult now, but it was equally challenging in the early half of the 20th century.

“I think there’s a sense that family, in the past, was monochromatic,” Gossage says. “I’m trying to show that throughout history, families have always had complex dynamics with power differences, changing expectations and tensions that had to be negotiated.”

Find out how men and women really choose their partners.