‘I think of myself as a scientist first’ 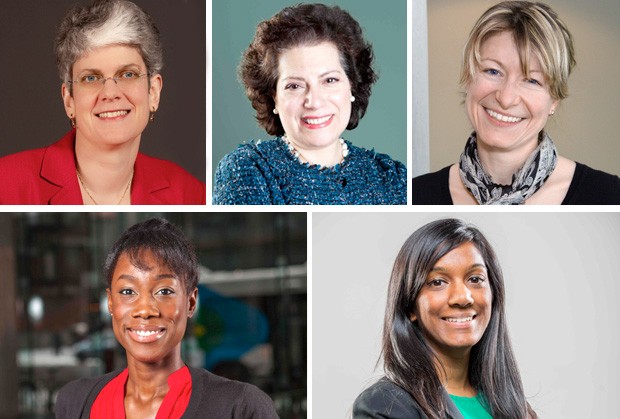 In March, to mark International Women’s Day at Concordia, we launched a bimonthly series of published conversations with visionary leaders, teachers, researchers and community members.

This week, the series continues with five prominent researchers.

Desirée de Jesus is a doctoral student in the Film and Moving Image Studies program at the Mel Hoppenheim School of Cinema. She is a 2013 recipient of the Bourses d’études Hydro-Québec de l’Université Concordia and the Glay Sperling Scholarship. Her research concentrates on female coming-of-age narratives in films and video games; transnational approaches to feminist theory; philosophy; theology; race and ethnicity; and cinemas of displacement.

Bianca Grohmann is the principal investigator at the Laboratory for Sensory Research at the John Molson School of Business (JMSB) and an associate professor in the Department of Marketing. Her research focuses on sensory aspects of marketing, scale development, branding and retailing.

Catherine Mulligan is the Concordia University Research Chair in Geoenvironmental Sustainability. She has held the position of associate dean of Research and Graduate Studies in the Faculty of Engineering and Computer Science since 2008. Mulligan is also the founding director of the new Concordia Institute for Water, Energy and Sustainable Systems.

Meena Kathiresan Meena Kathiresan is a doctoral student in the Department of Chemistry and Biochemistry. Her research focuses on elucidating the mechanism by which target proteins respond to reactive oxygen species (ROS) ­— which cause many disease processes, but also defend us against disease-causing organisms — in order to understand how cells function in ageing and disease. She is supported by a Natural Sciences and Engineering Research Council (NSERC) Scholarship.

Lea Prevel Katsanis is a professor in the Department of Marketing at JMSB. She has served as director of the John Molson MBA program and chair of the department. Her research focuses on all aspects of pharmaceutical marketing. Her latest work on pharmaceutical brand personality was featured in numerous national and international media outlets earlier this year. Her book Global Issues in Pharmaceutical Marketing will be published in 2015.

How did you end up in your field of research?

Desirée de Jesus: I took a phenomenal film-philosophy course during the final term of my master’s degree that encouraged me to think critically and creatively about the relationship between matters of difference like race and gender, alongside issues of representation and spectatorship.

Bianca Grohmann: I worked as a teaching and research assistant for a marketing professor when I was a graduate student. It was fascinating to learn about how consumers perceive products, brands and stores, and how they make decisions. As a result, I decided to go into marketing.

Meena Kathiresan: I majored in biochemistry and biology, thinking I would apply to medicine or dentistry. However, one summer I worked in a biology lab and discovered my love of research in basic science. Working in the field of biochemistry and biological mass spectrometry is unique because it is discovery, but applied discovery. We are validating our understanding of basic findings in the fields of aging and cell signalling in model organisms, and then extending it to human pathologies.

Lea Prevel Katsanis: I wish I could say there was some grand design to my choice, but it was really a direct result of my marketing experience in the pharmaceutical industry before earning my PhD. I enjoyed the complexity of the industry, as well as the issues faced by its multiple stakeholders.

What made you decide on your specific focus?

DD: Although important for raising awareness, it’s really easy to get stuck in debates about positive and negative representations of difference onscreen. I wanted to introduce a new and productive way of understanding and articulating the socio-cultural divisions of female figures onscreen and among spectators by focusing on female coming-of-age narratives in film and video games.

BG: My decision to pursue research in the area of consumer psychology and sensory marketing was strongly influenced by my former supervisor, Professor Eric Spangenberg, at Washington State University . The enthusiasm he brought to research on the effects of background music and ambient scent was simply contagious.

CM: Environmental concerns were becoming more and more important during my master’s degree. I had the opportunity to work in this area when I started at SNC-Lavalin, and I thought it would be really interesting and worthwhile. I have stayed in the environmental field ever since.

MK: I was working as a research associate in the biochemistry department of a biotech company, Aegera Therapeutics, and my colleague Andrea Romeo was working as the head of the bioanalytical department. He was always bringing me over to his department and showing me the technical and practical aspects of working with mass spectrometers. His enthusiasm ignited my interest in the field of small- and large-molecule mass spectrometry.

LPK: My focus on pharmaceutical branding and direct-to-consumer advertising is the result of the health-care industry becoming more consumer-centric than ever before. It is no longer just about physicians and their prescribing habits, but also about consumers — how they obtain and use medical information — as well as policy-makers: how they can protect the public, given the proliferation of widely available online and broadcast information.

As a woman, and as a researcher, who has inspired you the most?

DD: While I’m constantly inspired by the rich work of the faculty in the Mel Hoppenheim School of Cinema and the Simone de Beauvoir Institute, an enduring source of inspiration is my grandmother. Although unable to progress formally beyond a sixth-grade education, her resourcefulness and love of learning taught me the value of asking questions and adapting quickly to challenges, and that there are often many ways to solve a problem.

BG: I’m inspired by people with the passion and perseverance to pursue their dreams, even if it proves difficult at first. Among the people I admire most are many artists and athletes.

CM: I have worked mainly with men throughout my career. As a researcher, my PhD supervisor, Raymond Yong, has been my greatest influence. He introduced me to the geoenvironmental field and to many people, and has gotten me involved in professional societies and organizing conferences. He has also co-authored several books with me, including one we just finished.

MK: Most of my role models, with the exception of my current PhD supervisor, Ann English, have been men. My previous supervisor, Stephane Maltais, along with Andrea Romeo, my colleague at Aegera Therapeutics, are extremely passionate about science and encouraged me to pursue a doctoral degree. They inspired me to push my boundaries and pursue a degree where I could be autonomous.

LPK: As a woman, my parents and my great aunt Sophie. They were years ahead of their time in their attitudes towards women in the workplace, and they were wonderful role models. My inspiration professionally, but also personally, has been my economics professor at Vassar College, Shirley Johnson-Lans — an exemplary teacher, researcher and administrator, as well as an accomplished musician and mother.

Has the position of women in research — in general and in your field — changed during your lifetime?

DD: Broadly speaking, yes. But it’s important to be clear about who we’re talking about; there are significant differences among women that influence their experiences and positioning as female researchers. I feel very fortunate to be at a university that affirms the leadership and scholarly contributions of women, but I also recognize that many female researchers in fields where women are underrepresented may not feel the support or have access to the opportunities that I do here.

BG: In the field of marketing, women were already well represented and among the top researchers when I started my career. Today, many of the most productive and well-recognized researchers in the field are women.

CM: In engineering in general, although it is improving (I had no women professors when I was a student, even though I was in chemical engineering, which was more evenly balanced), there are still not a lot of women, particularly among those with higher degrees. In the environmental engineering field, the percentage of women tends to be higher.

MK: I have never thought of myself as a woman scientist. I think of myself as a scientist first. In my experience, I noted that women comprised nearly 70 per cent of my classes in the field of life science, yet I noticed the majority of full professors in the same field were male. However, I have seen an increase in the number of female graduate students at the master’s and PhD levels, and believe that both academic and industrial research positions are on a trend to reach a balance between male and female occupancy.

LPK: Yes and no. When I began working, whether in industry or academia, women accounted for about five to 10 per cent of a department. Women account for about 40 per cent of my department today. What has not changed is the difficult choice many junior female tenure-track faculty face when deciding to start their families. Their decision will have significant and potentially negative repercussions on their research productivity and dossier evaluation. Mary Ann Mason at the University of California, Berkeley, calls this the “baby penalty” — and it has significant implications for our junior female colleagues.

What’s one thing that you would change about the way research is currently conducted and supported at universities?

DD: I recognize that the issues associated with this question are quite complex. However, I think there are three main areas in which support for research could be improved: more funding for international doctoral students; greater openness to public scholarship and diverse research practices; and better compensation for research assistants.

BG: I would encourage projects that involve researchers from complementary fields. For me, working with researchers from other fields is an amazing experience, and I believe different perspectives on an issue often result in interesting approaches or solutions.

CM: Graduate student funding could always be improved. Also, an aspect of research for which it is difficult to obtain funding is the replacement of aging equipment. Equipment that is not innovative, but vital, is becoming more and more difficult to obtain, particularly in light of decreasing funds for research equipment.

MK: From a graduate student perspective, I believe that innovation in science requires diversity of high-quality research and development through academic and industrial collaborations. There are opportunities for lab exchanges abroad, but I think better advertisement and encouragement to take these opportunities at the beginning of a student’s degree will greatly benefit the student and provide a more diverse educational experience.

LPK: I would like to see greater financial support and formal mentoring of graduate students, both at the master’s and PhD levels. They are the future of our universities and society at large, and will hopefully contribute to making the world a better place.

This article is the fifth in a bimonthly series celebrating the contributions of women to Concordia University. Do you know someone who ought to be included? Let us know by emailing now@concordia.ca.

Read the four previous instalments of this series:

Find out more about Concordia’s “Pioneers, leaders and visionaries.”