How to tell lost stories 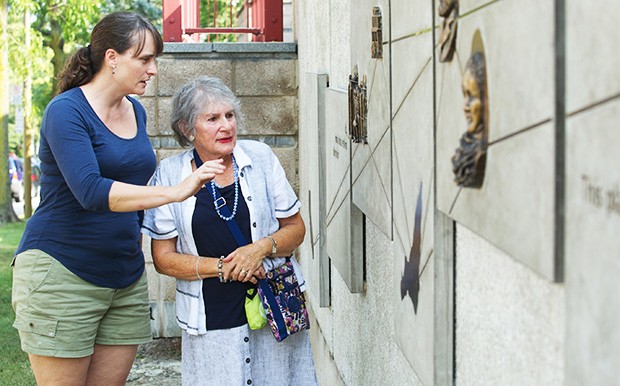 What goes into creating a monument or commemorative event? How do we decide what to include — and exclude?

“Instead of deconstructing monuments that have already been made, I was looking for a way to explain the process that takes place when a story is translated into public art,” says Rudin, a co-director of the university’s Centre for Oral History and Digital Storytelling.

The pilot episode tells the story of Thomas Widd — a deaf Montrealer who founded a school for the deaf in 1870 — and follows the creation of a public monument in his memory by artist Lalie Douglas. An inaugural screening takes place on May 7 at the Mackay Centre School.

For this first instalment of his project, Rudin and his team solicited the public’s help in unearthing a forgotten chapter of local history. Widd’s story, submitted by retired schoolteacher Janet McConnell, was the clear favourite among the 40 or so entries.

McConnell learned about Widd from her parents, who were deaf — the couple met at the Mackay School for the Deaf, which grew out of the institution he founded. McConnell herself taught at the school; her two daughters now teach there, too.

“Thomas Widd was the founder of the school, then Mackay put up the money,” Rudin says, adding that Widd's name was lost. “This was exactly the type of story I was looking for.”

And so began the process. Rudin and his team researched the story, then put out the word that they needed artists who were interested in creating a piece of public art to commemorate Widd.

Douglas, an installation and performance artist, answered the call, and set to work coming up with a concept. After a few false starts, she decided to create a mural that would adorn a retaining wall on Décarie Boulevard, in front of the school’s current site.

At its simplest level, the Lost Stories pilot tells the story of Widd. But, as Rudin explains, the episode directed by Bernar Hébert aims to do more than that.

“It also allows someone to see what happens when an artist has to take what may sound like a very straightforward story, and make a decision about what to do with that story, how to tell it and then how to bring it to the public.”

Rudin hopes to eventually broadcast Lost Stories by either television or the internet. He’s confident that the first instalment proves the project’s potential.

“The process worked out the way we imagined it would at the beginning,” he says. “The film is a good representation of what we’re trying to do.”

The premiere of the Thomas Widd instalment of Lost Stories takes place on Wednesday, May 7 at 1 p.m. at the Mackay Centre School in Montreal (3500 Décarie Blvd.). RSVP today.