'I lost my best friend last Friday': letters from the trenches

Capt. Francis Maguire, 2nd Battalion, was born in New Carlisle, Que., in 1886. He completed his Bachelor of Arts at Loyola College, one of Concordia’s founding institutions, in 1907. In the Loyola College Review, he was remembered as a talented, versatile student who “enjoyed great popularity.”

In 1914, Maguire was practising law in New Carlisle when war broke out. Already a captain, he tried to find a commission with the First Contingent heading overseas but was unsuccessful. Eager to join the war effort, he enlisted as a private.

Maguire’s letters, printed in the Loyola College Review of 1917, trace his journey across the Atlantic Ocean aboard the HMS Scotian, his training in England and some of the most horrific moments of the First World War, including the Second Battle of Ypres and the Battle of the Somme.

After working his way up through the ranks on merit, Maguire was once again made a captain in the summer of 1916. In September of the same year, in the frontline trenches outside the French village of Courcelette, Maguire went over a parapet to help a wounded soldier. He was killed by a German sniper. 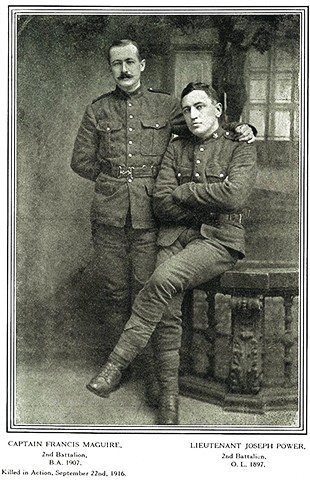 With the centenary of the outbreak of the First World War in mind, we have compiled a selection of Capt. Maguire’s letters home. They have been condensed in certain places.

We left Gaspé 32 troop ships and 5 cruisers. Since then we have been joined by the Superdreadnought “Queen Mary” and by two other battleships. We are proceeding with great caution. The only lights shown at night are a stern light on each ship so that from in front the fleet is invisible. It is really a magnificent sight in daylight. I do not believe that such a fleet ever crossed the ocean before. Be sure that we have seen no Germans yet. We had one day of rough weather and a great many were sick, but none in our room. At night there is generally a concert of some kind and many of the men are full of talent. Then there is a great tug of war competition between the different companies of this battalion. The other day a man went overboard from the “Royal Edward” but he was picked up by the “Franconian.” Everything here is kept so secret that it is impossible for me to tell you exactly where we are going or to know when our letters will reach you. At night, when all is quiet, I often go up on deck and sit and think of you all.

On Tuesday, we were inspected by King George and the Queen. We left at 9 a.m. and marched some seven miles to another part of the plain where there is a road, on both sides of which we were drawn up. After the usual amount of dashing about by the mounted officers, we finally got settled and waited for three hours. Then came a great stream of automobiles down the road with old fellows in uniforms and rows of medals, and young fellows with fewer medals and finally the King’s car, upon which the massed bands played God Save the King and the whole brigade presented arms.

I thought that all was over, but after about 15 minutes, who came down the line but the King with a few officers, then the Queen with a gentleman in civilian clothes, and more officers, then a young lady of about 18 years with Lord Roberts, then Lord Kitchener, and then a whole string of officers. They all passed a foot in front of my face, and you may depend the Life Guards could not have beaten us for steadiness.

Just a bit of a line to let you know that we are in France. That is all I can tell you. I hope you got the letter I wrote just before leaving England. I had a most interesting talk this morning with a Belgian soldier and learnt a bit of the inside intimate history of the taking of Liège. I never thought how valuable it would be to know French fluently. It is funny to hear most of the boys trying to make themselves understood.

On the evening of the 22nd of April, the enemy subjected the French, who were on our left, to a violent bombardment, mostly with chemical shells, and it proved too much for their troops, who were mostly Algerians. They beat it in great disorder, leaving a wide gap in the line, through which the enemy began to pour. We were rushed up in a hurry to put a stop to this, and came in touch with the enemy about 11 p.m. It was a cloudy night, and the ground was quite new to us all. Our battalion went in between the 10th Canadians and 16th Canadian Highlanders, a little to the N.E. of a village called St. Julien. It was bloody work from the word “go,” but by dawn we had chased them back beyond the first line of French trenches, and we dug ourselves in with our entrenching tools. All day Friday we held them and worked feverishly consolidating our position under a terrible artillery fire. That night my company advanced a couple of hundred yards more and dug ourselves in again at dawn and continued entrenching all morning. The enemy kept up a very heavy bombardment, and by 11 a.m. Saturday the village of St. Julien was all ablaze. It is estimated the enemy outnumbered us by 10 to 1 or more.

About noon, the 10th, on our right, had to retire or be asphyxiated by the poisonous gases. They retired in good order, but this left our right flank exposed, and a little later, the French on our left broke again, leaving the 16th Highlanders and us (the 2nd Canadians) alone in front. Anyhow, we kept giving them a heavy fire, and rolled up a great pile of dead in front of our position. About 2 p.m., things looked pretty black, and I had my doubts about seeing the sun go down, when orders came that out reinforcements were entering the reserve trenches behind us, and for us to hold out another half-hour and then retire. We did!!! As Joe Power says, thanks to the prayers of some good person we both came out of it without a scratch. We lost three-quarters of the battalion in killed and wounded.

I am so sorry not to have written you for such a long time, but really we have had no rest at all of late. Things are going beautifully down here at the Somme and we are pushing the Boche back with great regularity, but you have no idea what a gigantic task it is. The sad part is the loss of so many friends. I lost my best friend last Friday when the 2nd took 550 yards of trench and about 125 prisoners. The remainder died the death.

By the time this letter reaches you, you will no doubt have received official notice of your son’s death.

I read the burial services at the grave this morning, and he had a lovely funeral. The band of the 2nd Battalion, accompanied by a large body of soldiers, and officers, marched to the grave, where, after the service was read, the “Last Post” was sounded.

Last Saturday afternoon, your son met me and asked me if I would hear his confession, and Sunday morning he went to Communion. He entered the trenches Sunday night and was killed Friday night. So he was well prepared spiritually, and you have a great deal to be thankful for on that point.

Your son, I am told, met his death by going over the parapet and rescuing a wounded soldier. On his return with the wounded soldier, a sniper caught him with a bullet, and he died without suffering. “Greater love than this no man hath, that a man lay down his life for a friend.” Captain Maguire died in making the supreme act of charity.

Many letters from Loyola alumni who served in the First World War were printed in the Loyola College Review between 1915 and 1918. Copies of the publications are held by Concordia’s Records Management and Archives Department.