Is Lady Gaga as radical as she seems?

Lady Gaga: as subversive as she would like her audience to think? | Images: clips from videos directed by Jonas Åkerlund

Critics aren't going “gaga” for Lady Gaga's latest album, ARTPOP. Applause for the record — released last November — has been unenthusiastic. Lacklustre sales and singles that have missed their mark have plagued the project, suggesting that the avant-garde artist might no longer be so cutting edge.

But was Gaga ever as radical as she seemed? Not quite, according to new research from Concordia and the University of Ottawa.

Yet researchers Marc Lafrance, an assistant professor of sociology in the Department of Sociology and Anthropology at Concordia, and Lori Burns, a professor in and the director of the School of Music at the University of Ottawa, have shown that while the work defies mainstream expectations of gender and sexuality, its representations of race and disability remain very much the norm.

In a chapter in the recently published Lady Gaga and Popular Music: Performing Gender, Fashion, and Culture (Routledge, 2014), Lafrance and Burns explore two of the performer's most popular music videos — “Paparazzi” and “Telephone.”

Using a new method they developed to simultaneously examine the verbal, visual and musical content of a music video, the researchers interpreted the performance pieces in order to understand what they say about both popular music and society at large.

Lafrance and Burns subjected the creative materials to a systematic analysis that allowed them to identify the stereotypical codes and cultural conventions at work in Gaga’s videos. 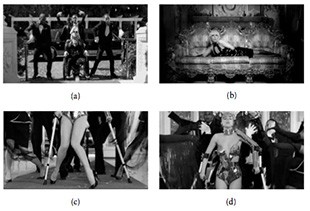 With respect to race, they found that, in these videos, whiteness is associated with bourgeois respectability and blackness with aggression and low social mobility.

“Black people in the video for ‘Paparazzi’ play butlers and chauffeurs — stock characters whose only purpose is to serve the white character at the centre of the video's narrative,” says Lafrance. “In ‘Telephone,’ despite the star presence of Beyoncé, the representation of black people in supporting roles is equally stereotypical: they are tough female prison inmates or brutish boyfriends.”

Gaga's depictions of what it means to be disabled are equally problematic.

“Disability is used as a metaphor for the catastrophes that ensue when a star surrenders her privacy to the paparazzi and allows herself to be devoured by her own appetite for fame and fortune,” says Lafrance. “Disability is, therefore, represented as a kind of punishment for those who fly too close to the celebrity sun.”

There are, however, progressive elements in Gaga's oeuvre that merit praise, Lafrance says.

“She tends to celebrate strong female characters and non-normative sexual experiences by representing queer sexualities as linked to emancipation and self-determination. That's a positive message for the LGBTQ community, and one she upholds again and again.”

Lafrance hopes this research will encourage the public to think critically about Gaga and pop culture in general.

“We want to get people to question whether Gaga herself is subverting or upholding that status quo she claims she is working against,” he says. “And that's an important question to ask when experiencing any art — whether high art, low art, pop art or ARTPOP.”