Community mourns the loss of a generous colleague and friend

On March 3, 2014, Giovanni Di Lullo, a part-time professor of Italian at Concordia, succumbed to cancer after a valiant battle that lasted two and a half years.

Giovanni was born in 1950, in Agnone, Italy. At age 15, he came to Montreal with his parents and younger brother and sister. After completing his elementary and secondary education he came to Concordia for his collegial and university studies, graduating with a Bachelor of Arts in English and Italian.

He went on to McGill University where he obtained his Master of Arts in Italian and completed all the required courses for a PhD in Italian. 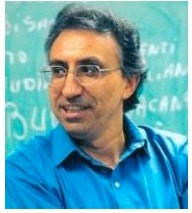 His father's untimely death prevented him from completing his final degree, but he did not let this set him back in his teaching career, which over the years spanned the spectrum of the Quebec educational system. As an undergraduate and graduate student he taught Italian language and culture to high school students for P.I.C.A.I. From 1979, until his illness struck, he was a part-time lecturer at Concordia University where he taught Italian language and literature courses.

In 1982 he obtained a full-time position at Bishop's University. He commuted from Montreal to Lennoxville three times a week until his retirement in 2007. At Bishop's he was a one-man department, teaching courses in Italian language, literature, civilization and conversation. He also taught Italian language and conversation courses at the Collège-de-Bois-de Boulogne for several years.

Giovanni was a very congenial and generous colleague who would gladly give advice to those who sought it. He wrote poetry, articles, book reviews, and especially letters to the Editor of the Corriere della Sera, where he expounded the proper usage of the Italian language. One of his former professors once remarked that Giovanni was born to be a literary critic.

Besides teaching, Giovanni had two other passions: film and music. Throughout his life he accumulated a substantial collection of books, films and records, which he would gladly lend to friends and colleagues as long as they were treated with the utmost care. He loved all genres of Italian music, and listening to music is what gave him some solace during the last period of his life when he was bedridden and could neither read books nor watch films.

Those of us who were fortunate enough to know him found him to be a simple, honest, learned and passionate man with an ironic sense of humour: all traits he appreciated in others. His many friends, colleagues, and students will miss him.

The Concordia community extends its deepest condolences to his mother Rina, his sister Filomena, his brother Alfredo, and his nephews and nieces.