The British Invasion at 50: a musical phenomenon 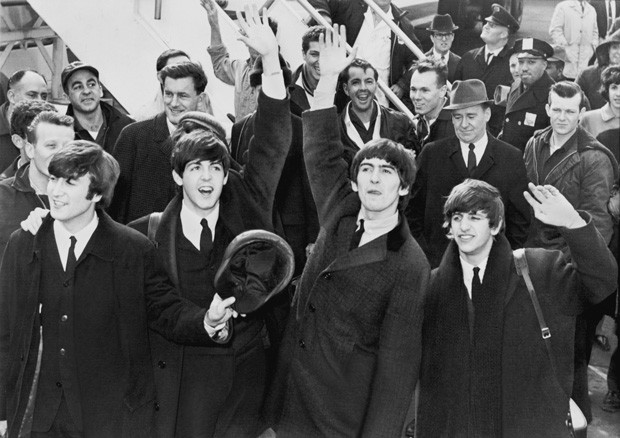 The Beatles wave to fans after arriving at New York City’s John. F. Kennedy Airport on February 7, 1964. | Photo courtesy of the United States Library of Congress‘s Prints and Photographs division

On February 9, 1964, the Beatles performed for the first time on the American TV variety program The Ed Sullivan Show — and changed musical history. The appearance by the rock and roll group from Liverpool, England, sparked what soon became known as the British Invasion, a musical and cultural force so intense that its ramifications are still felt 50 years later.

Already popular overseas, songs by the Beatles — John Lennon, Paul McCartney, George Harrison and Ringo Starr — were first heard on North America radios in 1963. In previous years only a handful of North American hit records came from the United Kingdom, but less than a week before the show the Beatles received their first gold album and first gold single, for Meet the Beatles! and “I Want to Hold Your Hand,” respectively.

Anticipation to see them on the Sullivan show, a Sunday night ritual for countless families, was extremely high, leading to a huge viewing audience estimated at an unprecedented 73 million. Their performance (and reappearance on the next two shows) brought Beatlemania to North America. By April, the Beatles held all top five places on the United States singles chart, a feat unheard of before and never duplicated.

The adoration for the Beatles may have been even more intense because its euphoria seemed to replace the mourning and bewilderment that lingered after the assassination of President John F. Kennedy less than three months earlier. The Beatles’ cheery songs, unified and unusual look, and charm and humour were a most welcome distraction. Soon, all things British were in vogue.

In the Beatles’ wake, numerous other British acts soon hit the charts. Those based on American R&B had a harder sound and would last longer: the Rolling Stones, the Kinks, the Animals, Manfred Mann and the Dave Clark Five. The Hollies featured an R&B sound too but specialized in group harmony singing, as did the Bachelors, who revived old pop songs.

Harmony duos Peter and Gordon, and Chad and Jeremy played appealing pop songs, as did the solo females Cilla Black, Petula Clark, Lulu, Marianne Faithfull and Dusty Springfield. The Beatles put Liverpool on the map and created a demand for others who featured the Mersey Sound (named after the city’s Mersey River): the Swinging Blue Jeans, Billy J. Kramer and the Dakotas, the Searchers and Gerry and the Pacemakers.

The invasion continued in 1965, with more acts getting their first North American hits. Some became icons: the Who, the Yardbirds, Them (with Van Morrison), the Moody Blues and Donovan. Others had less spectacular careers: Georgie Fame and the Blue Flames, the Fortunes, Ian Whitcomb, the Silkie, Wayne Fontana and the Mindbenders (who hit again in 1966 without Fontana), and Freddie and the Dreamers (who had five hits in six months and no others).

British Invasion groups’ influence inspired many youngsters — from the large cohort of post-war-born children known as the Baby Boomers — to acquire and learn to play instruments.

The fact that the Beatles wrote most of their songs shifted the emphasis from covers to original compositions. Most of the already-active rock musicians, plus many of the urban folk players, revised their approach. Thousands of new bands copied British styles and affected British sounds, clothes, images and even accents.

The British Invasion shook things up so much on a cultural level that it can be seen as the start of the Sixties as a concept, an era of cultural transformation (as opposed to the 1960s as a decade in time).

But by then the Beatles and other Brits had already altered the musical and cultural frontier forever.

Want to hear some British Invasion music? Craig Morrison’s 17th Annual Roots of Rock and Roll Concert — called She Loves You: The 50th Anniversary of the British Invasion — takes place February 7 and 8 at the Oscar Peterson Concert Hall on the Loyola Campus, 7141 Sherbrooke St. W. (The February 8 show is sold out.)

Craig Morrison is an ethnomusicologist, musician and author who teaches courses on rock and roll and its roots, black music, psychedelic music, regional styles and festivals for Concordia’s Faculty of Fine Arts.

Get more information about the concerts and Craig Morrison.