Montreal one of five global hubs for Future Earth 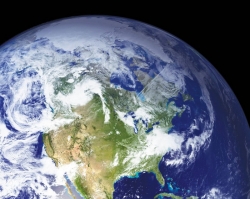 Montreal, July 8, 2014 – The International Council for Science (ICSU) has announced that Montreal will be one of five global hubs for Future Earth, a new program devoted to research into environmental issues and sustainable development. Concordia University will house the local secretariat that will bring together researchers from several Quebec universities to contribute to this major international scientific initiative.

Future Earth is the result of a commitment made in 2012 at the United Nations (UN) conference Rio+20 to develop a new international network to advance scientific study on questions of environmental impact. The new program is supported by several international research councils and UN organizations including the United Nations Educational, Scientific and Cultural Organization (UNESCO). The four other global hubs selected for Future Earth are Tokyo, Paris, Stockholm and Boulder (Colorado).

Montreal was selected as a global hub from among more than 20 competing bids. This decision marks the culmination of a successful collaboration between representatives of Montreal International, the Quebec government and Montreal universities. The strong spirit of collaboration between these partners will be vital to the ongoing operation of the new network. Montreal’s bid highlighted the concentration of researchers across various disciplines within the city’s universities who are already contributing to a better understanding of sustainability issues.

“We are very excited about hosting this unique venture linking thousands of researchers across three continents,” says Alan Shepard, president and vice-chancellor of Concordia University. “Future Earth clearly recognizes Montreal’s research capacity and the valuable contribution we will make in developing solutions to global environmental challenges”