Arts writer Christine Unger reflects on the development of Ratkind before its arrival at the FOFA Gallery
|
By Christine Unger
Source: Faculty of Fine Arts 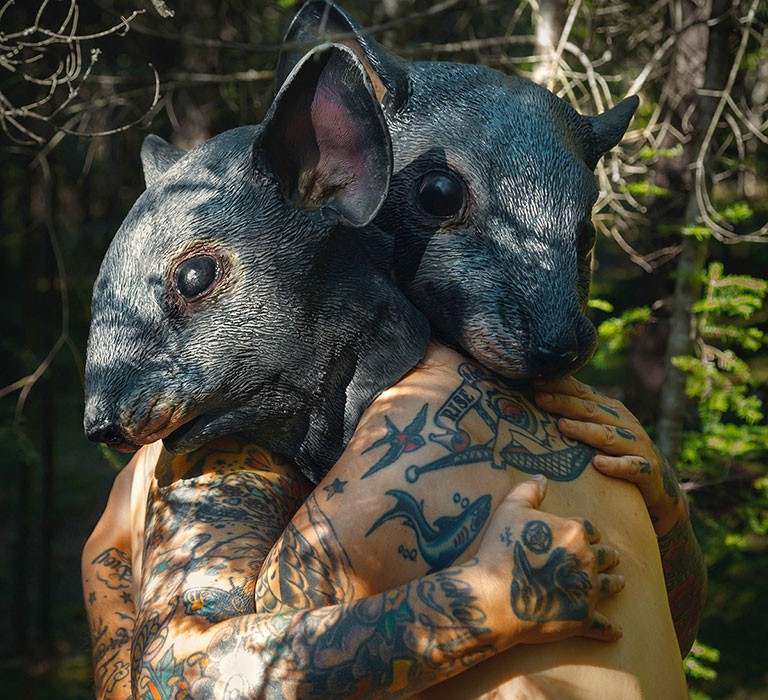 “Can we see beyond the face of a thing to the heart of a being?”
Bonnie Baxter, Exhibition Statement, 2019

When Bonnie Baxter was a child, the world was a promise, like a mother’s kiss on the forehead: everything would be alright. Still reeling from the losses of two world wars, it was a world moving from black and white to colour and just about everyone was in a hurry to get on with working, playing, and consuming. Fast forward some 65 years and you have the artist Bonnie Baxter and the kernel of what is motivating RatKind, a series of installations that invite the viewer to enter an implausible utopian/dystopian future in which hominoid rodents have supplanted humans.

RatKind: Paradise Lost is the most recent exhibition of Bonnie Baxter’s surreal, challenging, and somewhat disturbing, multi-media RatKind series. More than an exhibition, it is a statement of involvement and a commitment to the future. Concurrent with the exhibition, Baxter has joined with FASA to support Student Art Actions for the Planet as they repurpose Baxter’s memorial banner Coming Out of Sleep (a former commission from Concordia University) to create a collective mural for the FOFA Courtyard. She has also invited Melbourne based Canadian artist/researcher Dr. Jen Rae, to talk to students and community members on September 13th about the role of the artist in the event of ecological crises. The message is clear, there is no more time to waste, together we must adapt to the reality we have created or lose the paradise we live in.

In 2017 Jonathan Demers, curator of the MAC LAU (Musée d'art contemporain des Laurentides) in Saint-Jérôme, approached Baxter about creating a flagship exhibition—part retrospective and part something entirely new—for their 30th anniversary. Baxter proposed RatKind as a response to Trump’s America and the generally retrograde state of world politics and human rights. Over a period of months in 2018 most of RatKind’s elements were created in the astonishing natural setting and spectacular gardens of the artist’s mountain home in Val-David. A small army of students, artists and members of various communities, partnered to become models, performers and participants in extensive video and photography sessions. Their motivational premise: a future in which RatKind had emerged from the shadows of human-made ecological disaster, to build a utopia based on empathy for all living things and respect for all forms of sentience - kindness over kind. 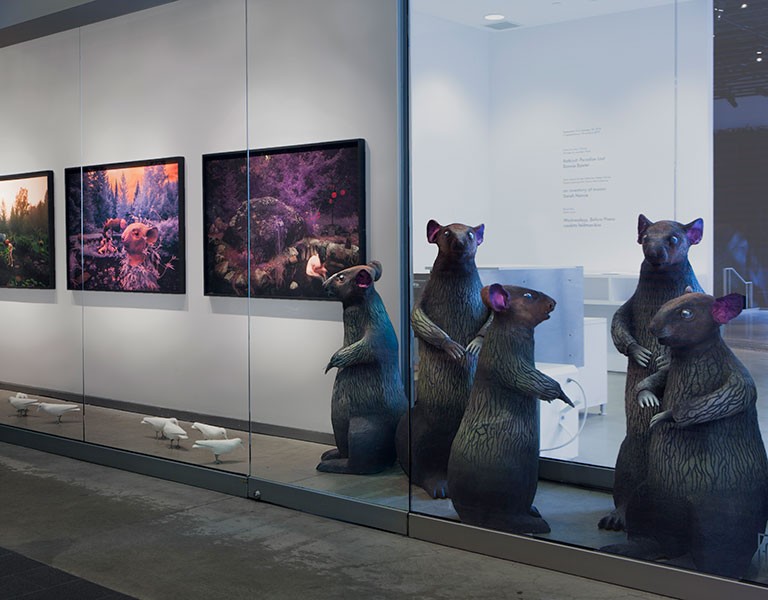 Walking the glassy hallway of the FOFA Gallery’s Vitrines, Baxter’s RatKind shimmers with colour. Gathered in one corner, a grouping of human-scale rats stand upright and unemotional, seeming to confer as they study us. The paradisal world glimpsed beyond the glass is mute and enigmatic, it’s beauty beyond our reach. RatKind appears uninhibited, tender and gentle in their gestures, their movements unhurried. Yet for all this exhibition’s allure there are elements of warning: white crows suggest unheeded portents, colours are rich but toxic. RatKind’s gestural language is one of supplication, its tableaux, demonstrations of suffering, oppression, and caring.

This exhibition asks that we get past one of our most common phobias. Baxter’s “rats” have found a great deal of support, but they have also been the victim of social pushback. Several galleries have made it clear that they are worried about the consequences of showing rats. Twice the city of Saint-Jérôme has backed out of plans for a full scale RatKind mural when initial expressions of interest were followed by their City Council’s nervous withdrawal of approval despite the backing of the MAC LAU museum.

If someone calls you a “rat” you can be pretty sure it’s not meant as a compliment. For most human cultures, fear and loathing of the rat stretches backward in time as far as any written records and probably beyond. Our co-evolution is so closely tied to the rat that the oldest known human ancestors are the 145 million-year-old skeletons of two rat-like creatures. Rats live in our walls, basements, ceilings, vents, even our plumbing. They are remarkable for their adaptability, sociability, cleanliness, intelligence and empathy. They can also transmit diseases both directly (like the hanta virus, and plague) and indirectly (like the west nile virus and typhus). At the same time, about 95% of our laboratory animals are rodents and as such they probably save far more lives than they take. Our apprehension of the rat is embedded in our subconscious. Rats’ similarities and physical proximity to us have made them a dark mirror of our own existence, a reflection we’re often afraid to see or acknowledge.

In her artist statement Baxter questions if we can we move past our fears and prejudices, to “bring back the garden?” RatKind posits that moving past fear to acceptance, recognizing deeply held prejudices, and facing unpleasant truths, are precisely the social challenges we must face to win back paradise.

Baxter’s restless spirit and intense awareness of the changing world, particularly as seen through the eyes of her students, has led her to embrace many new means of expression over the years, but her underlying philosophy toward life and art has never wavered.

“I believe in bold colours and strong images made subtle through layers of content, drawing from past, present and imagined futures. I would rather see these layers as opportunities, evidence of the simultaneity, synchronicity, and serendipity that abounds in life.”
Bonnie Baxter, Artist Statement, 2007

Aside from teaching at Concordia University since 1984, Baxter’s personal outreach includes many community building enterprises. She founded the custom print shop Atelier du Scarabée and was a founding member of the print studio facility of Atelier de l’île in 1975. She also organized community/student art projects like Notre Maison le Terre (2012) along with the Centre de exposition de Val-David and Faire impression au rouleau compresseur (2015) with the Atelier de l’île. Recent acknowledgements include the President’s Excellence in Teaching Award, from Concordia University and the Charles-Biddle Prize in 2017. In 2018 she received the Prix les Grand Soleils (A lifetime achievement award) from Le conseil de la culture des Laurentides, and most recently she was awarded the Prix Télé-Québec at the 11th Biennale internationale d’estampe contemporaine de Trois-Rivières for her laser engraved woodcut series RatKind. Watch Baxter’s television interview with La fabrique culturelle “RatKind : L'univers troublant de Bonnie Baxter” is available at the following link.

At the FOFA Gallery

FOFA Gallery presents a talk titled Creating into the Future: The Role of Artists in the Climate Emergency by Dr. Jen Rae at York Amphitheatre (EV 1.605) on September 13, from 3:30 - 5 pm, prior to the lecture - from 2:30 - 3:30 pm there will be an informal gathering and short intro will be held at the Marble Table in front of FOFA Gallery.

Christine Unger has lived and worked in Deux-Montagnes, Quebec as a visual artist, artists’ consultant, web designer, researcher and writer for the past 25 years. With a Masters in Fine Arts and a background in history, her skills as a writer and designer are self-taught and experience based. She has written hundreds of program notes for concerts, grant applications, and articles. Like “the rat” she prefers to stay behind the scenes and prides herself on adaptability.  In 2016 she wrote the pulp fiction novella “My Name is Jane” that served as a backdrop for Bonnie Baxter’s exhibition La mort tragique et prématurée de Jane in which “the rat” was first introduced