Faculty member honoured for a lifetime of literary work 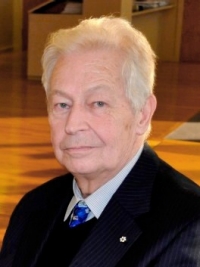 François-Marc Gagnon, affiliate professor of art history and founding director of Concordia's Gail and Stephen A. Jarislowsky Institute for Studies in Canadian Art, was awarded the top annual prize from the Académie des lettres du Québec on September 26, 2013.

The Academy, which unites writers and intellectuals of all disciplines, honoured Gagnon for his body of literary work and his research contributions to Quebec society.

Gagnon, who received a Governor General's Award for his critical biography of Paul-Émile Borduas in 1978 and was inducted into the Order of Canada in 1999, is widely recognized as an outstanding scholar in Canadian visual culture and a tireless promoter of Canada's visual heritage.

His books include La Conversion par l'image (1975), Paul-Émile Borduas: Ecrits/Writings 1942-1958 (1978), Paul-Émile Borduas (1988) for the Montreal Museum of Fine Arts, Chronique du mouvement automatiste québécoise 1941-1954 (1998) and The Codex Canadensis and the Writings of Louis Nicolas (2012), for which he was awarded the Sir John A. Macdonald prize, a Governor General's History Award for Scholarly Research earlier this year. He is a regular contributor to the Journal of Canadian Art History/Annales de l'histoire de l'art canadien and is also member of the publication's editorial board.