For scientists working on interplanetary exploration, Martian gravity is difficult to replicate accurately. But Concordia researcher Krzysztof (Chris) Skonieczny did, however briefly, in a small airplane high above the national capital region.

Skonieczny, an assistant professor with the Concordia Institute of Aerospace Design and Innovation (CIADI), was measuring the effects the Red Planet’s light gravity would have on an upcoming Mars mission. More specifically, he wanted to see how Martian gravity — only one third of the Earth’s — and soil would affect the mobility of new Mars rovers.

With the ExoMars rover mission scheduled to leave Earth in 2020, scientists with the European Space Agency (ESA) and Roscosmos, the Russian state space corporation, are hoping to avoid the perils that befell previous rovers.

In 2009, for instance, the wheels on the NASA rover Spirit became stuck in the sand; it was immobilized for the rest of its mission. By conducting rigorous and extensive testing on new wheel technology, the hope is that future rovers will be properly equipped to deal with the unforgiving Martian terrain.

“What we’re looking for is how gravity affects traction and sinkage,” says Skonieczny.

“The whole field of thinking about soil interaction with rovers has many remaining open questions. There is not a lot of work on gravity and soil and robot-soil interaction.”

In order to achieve the low gravity conditions encountered on Mars, Skonieczny and his partners at the National Research Council in Ottawa boarded a modified Falcon 20 jet fitted for their needs. With a small sandbox filled with simulated Martian soil, a rover wheel prototype and precise data-gathering equipment, Skonieczny and his students embarked on a series of flights that he likens to “a 10,000-foot roller coaster ride.”

It was a science mission not made for people with delicate constitutions. The Falcon 20 would make steep climbs of 10,000 feet that would become parabolic arcs. Those curves would result in brief windows of low, Martian-like gravity on board the aircraft. Skonieczny’s team had roughly 30 seconds to carry out experiments and gather the data, and then had to quickly reset the soil before they went through the cycle again.

Automated systems were used to move the wheel in the soil, and powerful air jets were used to reset the soil bed to a common consistency after each test. 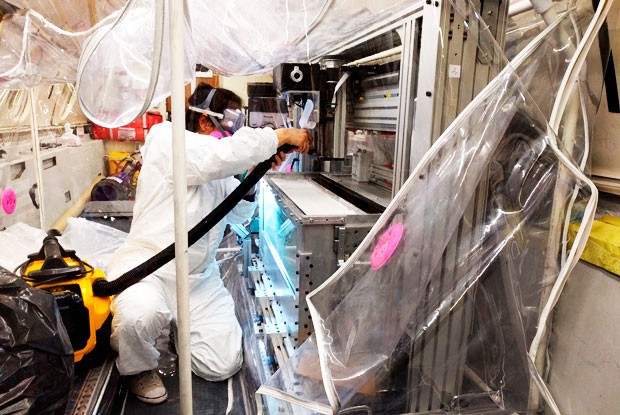 “We had to do a lot of hard work and planning to get meaningful results in that amount of time,” he says. “The trick was to have everything automated and ready to collect data in two minutes before the next parabola.”

Over three days of flying in early March, Skonieczny and his team completed 25 parabolas and gathered enough data to keep them busy for the coming months.

Skonieczny notes that the mission, though carried out on behalf of a mission run by the ESA and Roscosmos, was entirely Canadian-funded and led by Canadian researchers.

Find out more about the Concordia Institute of Aerospace Design and Innovation.