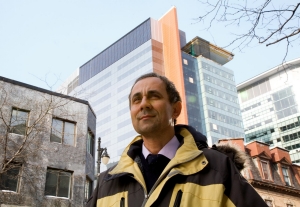 Faculty of Engineering and Computer Science professor Andreas Athienitis will be named as an International Building Performance Simulation Association fellow at the organization’s annual conference taking place from August 7 to 9, 2017 in San Francisco.

A professor in Concordia’s Department of Building, Civil and Environmental Engineering, Athientis is known for his considerable contributions to the field of building performance simulation through education, research, practice and tool development.

Notably, Athienitis led the design and implementation of the John Molson School of Business Building’s “solar wall” installation, which uses a single façade surface to generate both heat and electricity from the sun. It was the first of its kind in the world when the building opened in 2009.

In addition to development of novel building-integrated solar systems, he and his research team work on the optimization of building energy performance and building operations to reduce and shift peak demands for electricity.

Athienitis holds both the NSERC/Hydro- Québec Industrial Research Chair in Optimized Building Operation and Energy Efficiency and the Concordia University Research Chair in Integration of Solar Energy Systems into Buildings.  He is also the scientific director of the NSERC Smart Net-zero Energy Buildings Strategic Research Network, and heads the Concordia Centre for Zero Energy Building Studies.