I fell in love with the university, its boldness and its history
|
By Leslie Schachter
Source: Concordia University Magazine

When Rebecca Duclos began her five-year term as dean of Concordia’s Faculty of Fine Arts in August 2015, she brought a wealth of experience — and enthusiasm. Duclos had been dean of Graduate Studies at the School of the Art Institute of Chicago and previously held faculty and research positions at a number of institutions, including the University of Manchester, McGill University, Deakin University and Concordia.

She sat down to share her thoughts on her dynamic faculty and its students, Concordia and its place within the cultural landscape of Montreal. 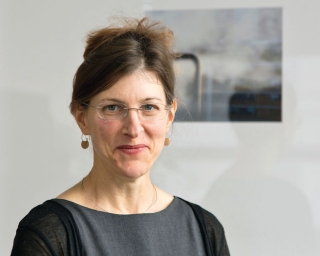 Rebecca Duclos’s educational background includes a PhD in art history and visual studies from the University of Manchester.

Can you share a bit about your own background?

Rebecca Duclos: “I started out studying ancient Greek and Latin. From there I moved into archaeology at the University of Toronto, where I completed a double major in classics and Near Eastern archaeology. I realized that I was more interested in an object’s life after it had been unearthed and how it circulated — as not only a piece of material culture but also as a piece of history that could be continually reinterpreted.

That led me into a graduate degree in museum studies at the University of Toronto. As part of that I did an internship at the Smithsonian Institute in Washington, D.C., and then left to teach in Melbourne, Australia, for a year before returning to Canada to work at various cultural institutions for a decade. The history of my career has been following my passions. That’s why I returned to school as a 40-year-old to take my PhD in England. It’s been a really interesting mixture of continually teaching, taking various degrees, independently curating, writing, researching, working with artists and being an administrator in these different realms.”

What drew you back to Concordia?

RD: “Its DNA. I taught at Concordia for three years. I fell in love with the university, its boldness and its history. And I was further attracted back by the terrific momentum it has. Also, living in Montreal — it’s really the cultural nexus of Canada and it’s probably one of the best places to be involved with a faculty of fine arts. Because I worked in the cultural field for years, was an independent curator, and have been in numerous academic institutions as both student and teacher for two decades, I have neither a strict academic background nor a strict administrative one. Montreal and Concordia have the guts to hire people like me. They’re open. Trusting. And unfettered by tradition.”

What are your impressions of Concordia since you’ve returned?

RD: “In the arts generally in Montreal, we really have a climate of collaboration and conversation. At Concordia, many of the students and the faculty take on a huge amount of solo, independent work, but there is also a tradition of the ensemble and of the collective.

There is a communal idea of what it means to generate knowledge and activity together that simultaneously appreciates and acknowledges separate, individual, unique contributions. It’s an interesting and challenging way to work — and characterizes the way many arts practitioners move through the world.”

What is your vision for the Faculty of Fine Arts?

RD: “We have the benefit of this extraordinary faculty with a rich array of programs in the performing arts, cinema, design, studio, and the major academic and professional areas. And we also have access to so many other perspectives and practices and to the astonishing research that goes on in the rest of this university. You name it: social innovation, theology, nanoscience, geography, electrical engineering, poetry. It’s amazing!

Our students have so many more potential connections at their fingertips. Now is the time to build relationships across the faculties so that those who are interested can have the opportunity to find out how other people think, how other disciplines work and what the issues of concern are that bring many of us together.”

What is the biggest challenge for the Faculty of Fine Arts?

RD: “We have what I would call good problems — trying to figure out how our ideas and ideals and desires can be matched with structures that can be morphed and moved so that our actions are responsive and can become real — so they can be actualized.

Another good problem is the burden of choice felt by many of our students. It’s difficult for some of them because, on the one hand, society says you should have a plan and you need to be very practical and determined about your education. On the other hand, many of us in the arts and culture field are highly responsive and shape-shifting and are used to living with certain kinds of ambiguity about what’s next. This can feel stressful for students because the rest of the world is trying to lock them down. Yet it’s those very qualities they feel as creative practitioners that will let them be malleable and amenable to whatever life is going to throw at them.”

How are Montreal’s cultural and artistic qualities reflected at Concordia?

RD: “We’re so lucky here. It’s a very symbiotic relationship with the cultural landscape of the city and we’re just beginning to map out what some of our networks are. I would say that every single one of our faculty and most of our students have some connection to artist-run centres, museums, galleries, performance sites — and have relationships with critics, designers, curators and writers. It’s phenomenal the kind of interconnections that happen. So the next step would be not only to recognize these linkages but actually to build on them so that the university can become an even more overt part of the cultural fabric in Montreal.”

Can you talk about Concordia’s partnerships with other cultural institutions?

RD: “There are so many. But I can speak about at least one aspect of the relationship we are specifically developing with the Musée des beaux arts around what might loosely be called ‘arts and health.’ One of the main missions for the Musée is to think deeply about community and cultural health in both a physical and a metaphysical way. How do the arts function not just in society but for society? How do cultural institutions become not just destinations but caring entities contributing to civic life? Many of our faculty have long been asking these questions and will be part of the museum’s projects going forward.

I am also excited to think about the future physical, architectural connections between Concordia and the Musée through what I imagine as a contiguous campus that uses the Bishop Street corridor as a space for public programming, urban experimentation, street theatre, design innovation — a social space that links these two great institutions.”

RD: “I love all of it! The 70-hour weeks can be a bit punishing. On the other hand, what job lets you choose from a performance or a vernissage or a symphony or a play every night? There’s just so much going on. The job has two communities, one inside the university and also one out in the city.

I love this constant stimulation, and every day is still a wonderful, whole new surprise.”