Concordia grad Lisa Haley, BSc 96, is living her Olympic dream as assistant coach of the Canadian women’s hockey team. The Halifax native’s leadership skills are getting the ultimate road test at the Winter Games in Sochi, Russia. 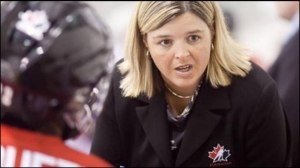 Canada is undefeated in the women’s tournament, which determines how they’re placed in the playoffs.

Haley describes her Olympic experience as energizing. “I’m excited about how we’re going to perform,” she says.

Team Canada defeated the United States 3-2 on February 12 in a game that promises an exciting match in the upcoming elimination round.

“They are well coached,” says Haley, who played for the Stingers until 1996. “We have a veteran team with a lot of experience.”

Haley, who coached the Saint Mary’s University women’s team for 14 seasons and to four Atlantic University Sport championships, has an impressive record.

Yet she says Olympic Games — and rivalries — can create magic. “If the script’s written the way everyone expects, it will be a Canada-U.S.A. match-up, but anything can happen.”

Will they? “We need to play to our strengths — our team play and our systems,” Haley says.