For students from hot climates, part of their Concordia education is adapting to the cold
|
By Kathryn Jezer-Morton 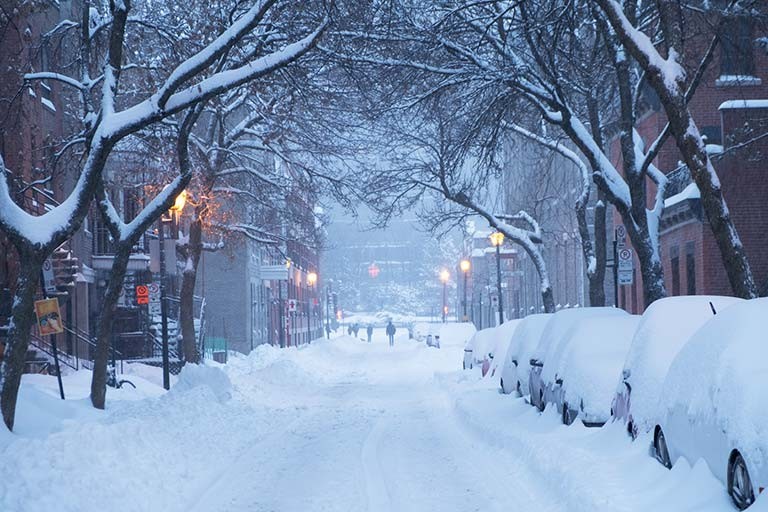 In Montreal, winter is a way of life. | Photo by Shawn Dearn on Unsplash

You never fully get used to Montreal winters. Even lifelong residents can find themselves shocked by the season’s annual return. It’s easy to acclimatize to balmy weather, but cold? Every year can feel like the first time.

Students arriving from warmer climates have to adapt simultaneously to university life and their first-ever Canadian winter. And for those starting at Concordia during the winter term, there is no getting-to-know-you period. It’s everything new, all at once: a new city, a new school and a new “feels like” temperature.

Lucky for winter newbies at Concordia there are plenty of opportunities to experience the season while staying within your comfort zone. Yes, many buildings on Sir George Williams Campus are connected by tunnels. But, more importantly, you can learn to skate at the Ed Meagher Arena or check out one of the virtually non-stop outdoor events happening throughout winter in Montreal.

Audrey Fitzgerald is an exchange student from the Royal Melbourne Institute of Technology in Melbourne, Australia. She arrived at Concordia just before the winter term began and experienced a crash course in cold-climate living. Having never seen snow before, she had to adjust expectations to reality.

“I didn’t realize that it would be difficult to walk. It’s still a massive novelty to me whenever it snows,” she says. “I bought boots and a coat after I got here, because I didn’t think they would actually sell the right stuff in Australia.”

Fitzgerald’s commute is a 25-minute walk to the Sir George Williams Campus. Australia experiences relatively short days during their winter, so the early sunset hasn’t been a huge shock to Audrey — leave that to the cold. “In Australia, if it gets to 10 degrees Celsius, that’s considered freezing.”

But after a couple of winters, even hot-climate natives get the hang of things.

“What I’ve learned is, in the wintertime, don’t try to look cute,” says Amber Augustus, a computer engineering student who arrived at Concordia from Saint Vincent and the Grenadines in the Caribbean in 2017. “Just find clothing that makes you feel warm. Invest in a good scarf — they’re important.”

Augustus encourages winter rookies not to be intimidated by the cold. “Try to be open-minded about it,” she says, adding that she’s tried ice skating since being here.

Winter requires Concordians to rethink their approach to being outside, but it doesn’t have to mean avoiding it! In Montreal, winter is a way of life, so grab your warmest scarf and join in.