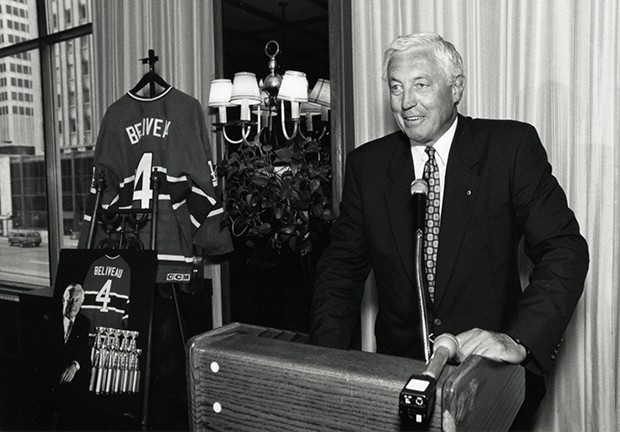 Béliveau, LLD 09, was captain of the Bleu, Blanc, Rouge for a decade. He won 10 Stanley Cups — the first in his inaugural year with the National Hockey League (NHL) in 1956, the last in 1971, when he retired.

“He was a pillar of the community — on and off of the ice,” said Concordia President Alan Shepard. “For his contribution to Quebec and Canadian society, Concordia was proud to recognize him with an honorary doctorate in 2009. The university community extends its condolences to his family and to hockey fans who have both lost a great.”

In his honorary degree citation, Richard Courtemanche of Concordia’s Department of Exercise Science, described him as “a source of inspiration for our students. He has the remarkable capacity to unite people.”

Concordia awarded Béliveau with its prestigious Loyola Medal in 1995. The accolade recognizes outstanding citizens who’ve made significant contributions to the community.

“He reflected the ethos of the Loyola Medal, which recognizes individuals who enrich humanity at large,” said Bram Freedman, vice-president of Development and External Relations and Secretary-General at Concordia. 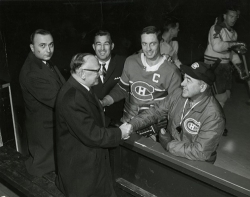 A native of Trois-Rivières, Quebec, Béliveau was awarded the Art Ross Memorial Trophy for most goals scored and the Hart Trophy for most valuable player — both in 1956. He was inducted into the Hockey Hall of Fame in 1972.

He was promoted to the rank of Companion of the Order of Canada in 1998 and awarded a star on Canada’s Walk of Fame in 2001.

Béliveau is survived by his wife of 61 years, Élise Couture, his daughter Hélène, and two granddaughters. He will lie in state at the Bell Centre on Sunday, December 7 and Monday, December 8 from 10 a.m. to 6 p.m. ahead of a national funeral on Wednesday, December 10 at 2 p.m. at the Mary Queen of the World Cathedral (1085 de la Cathédrale).

The university flags will be lowered to mark the passing of Béliveau.

Share thoughts on the late Canadien with the #ThisMtl hashtag.