Forget Terminator: the future of robots is about teamwork 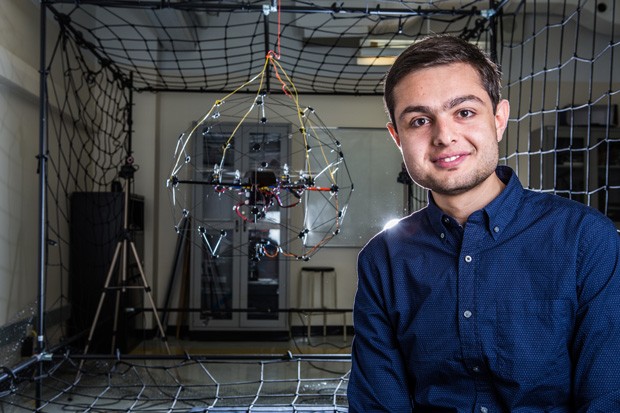 Omid Danesh with a quadrotor helicopter: “I realized I wanted to know more about robots and control systems.” | Photo by Concordia University

As a child in Iran, Omid Danesh watched his father, a professional animator, struggle to create a realistic 3D animation of a flock of birds: “How do you animate 100 birds at the same time?”

The challenge became one of devising basic algorithms to control the animals’ movements within established parameters. And the passion it inspired would eventually bring Danesh to Concordia.

Now, as a master’s student in the Faculty of Engineering and Computer Science, his aim is to make complex sets of mechanical devices work as a team. Under the supervision of Department of Mechanical and Industrial Engineering professor Chun-Yi Su and Jamal Bentahar, an associate professor at the Concordia Institute of Information Systems Engineering, Danesh is developing technology that may one day change the way we see machines.

While Danesh’s curiosity was instant, his know-how didn’t materialize overnight. In 2006, he began studying mechanical engineering at Khorasgan Islamic Azad University in Isfahan, Iran. There, Danesh saw how robots were being used to help people undergo physiotherapy.

“I realized I wanted to know more about robots and control systems,” he says.

He points to the idea of a team of agile, flying robots, such as quadrotor helicopters, that would be capable of conducting surveillance missions over a large area in a very short time.

Quadrotors are 1.4-kilogram helicopters with four 25-centimetre propellers inside a carbon fibre cage in the shape of an 80-sided polygon called an octacontagon. Concordia researchers have been working with them since 2011, and there’s still plenty of ground to cover.

“Quadrotors could be used to make a real-time map of the inside of a building under attack, so that police officers can be aware of risks inside beforehand,” says Danesh. “Or imagine sending quadrotors to measure air pollution in parts of a city that would otherwise be inaccessible.”

Though neither of these scenarios is a reality yet, Danesh is confident both can be. And he knows that his research is moving in the right direction.

“I’m thrilled to be one of hundreds of scientists and engineers who are working in this field.”

Luis Rodrigues and his students have collaborated with Canadian tech company Pleiades to work on a project involving a flying robot, Spiri, who responds to music and other forms of command. Watch the video: