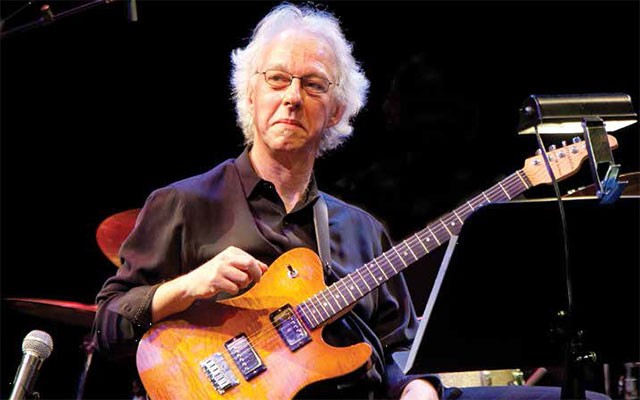 Gary Schwartz onstage during his 2012 LETTINGO concert which was a tribute to the music of Ornette Coleman.

“One of the weird things about this record is that it’s a bassless trio. In the history of jazz, it’s an extremely rare thing,” he says.

Three guys: saxophone, guitar, drums. That’s it. The three musicians have a long history together. Côté played on Schwartz’s award winning LETTINGO project and he has written charts for Schwartz’s ensemble class for many years. Doxas, a Concordia drum teacher, played on Schwartz’s first quintet record.

“Everybody’s role becomes different. I’ve been hugely influenced by the Bill Evans trios and the Paul Motion Trio with Joe Lovano and Bill Frisell ,” he says. “I can solo and I can accompany but the thing about this band is – few people have ever heard of a saxophone accompanying a solo. When you listen to it, it’s easy to hear. He’s now blowing behind me and actually accompanying me. That’s the thing, we’re trying to extend the forms and the traditional roles.”

Another aim of the album was to bring a little swing back to the jazz trio.

Schwartz has been teaching part-time and giving individual lessons at Concordia since 1979. He started to play jazz when I was 14 years old by playing the transcription charts in the back of Downbeat magazine and hasn’t stopped.

The recording was funded by CUPFA, the Conordia Part-time Faculty Association. You can buy the CD online or directly from Gary. Starting December 13th, you can catch Schwartz every Tuesday night at the jazz club Dièse Onze (4115 St Denis) from 6-8 p.m. where he plays in a duo with pianist Jeff Johnson.