Concordia’s Department of Art History reflects on an outstanding year

Concordia’s Department of Art History had an outstanding year in 2014-15. We saw exciting innovation, collaboration, and high levels of productivity in teaching, research, dissemination, outreach, and awards, at the both the faculty and student levels, and often shared between the two.

The department is very proud to announce that the 2015 President’s Excellence in Teaching Award, which includes all four faculties, was presented to Dr. Catherine MacKenzie, whose career at Concordia spans thirty years. Dr. Alice Ming Wai Jim, graduate program director, was named recipient of the prestigious Artexte Prize for Research in Contemporary Art, while Dr. Cynthia Hammond was presented with the Concordia Council on Student Life’s Outstanding Contribution to Student Life award, and Dr. Heather Igloliorte was awarded a Concordia University Research Chair (CURC) in Indigenous Art History and Community Engagement.

In addition to these honours, 2014-15 was a highly productive year for the department in terms of research. Pairing her CURC with two SSHRC-funded projects, Dr. Igloliorte initiated two major collaborations with her community, the Nunatsiavummiut (Labrador Inuit): the creation of a nationally touring exhibition of contemporary art and craft (opening at The Rooms Provincial Art Gallery in fall 2016); and an international museums database project that will see institutions worldwide share images and knowledge from their collections with ALIVE: the Arts of the Labrador Inuit Visual e-database.

Dr. Jim launched a brand-new scholarly publication: the Journal of Asian Diasporic Visual Culture and the Americas (ADVA), co-edited with Alexandra Chang, published by Brill (Leiden/Boston) in affiliation with the Asian/Pacific/American Institute, New York University and Concordia University’s Gail and Stephen A. Jarislowsky Institute for Studies in Canadian Art. 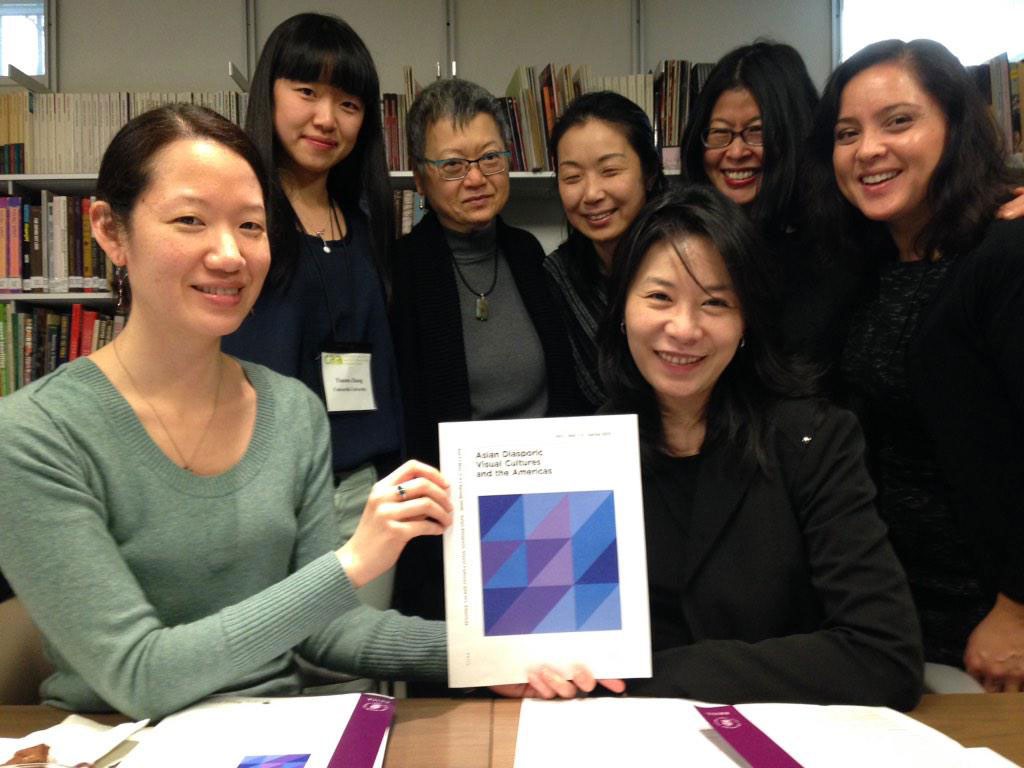 Dr. Kristina Huneault, CURC in Art History, received a Connections Grant from the Social Sciences and Humanities Research Council of Canada to support The Artist Herself, the third triennial conference of the Canadian Women Artists History Initiative. This year's conference was co-organized by teams at Concordia and Queen’s Universities: Dr. Huneault and affiliate faculty member, Dr. Janice Anderson collaborated with Dr. Janice Helland, head of Art History, and curator Alicia Boutilier, both from Queen’s University. The event was hosted at Queen's on May 8 and 9, 2014 and coincided with the opening of an exhibition of the same title at the Agnes Etherington Art Centre.

Feminist art historical research and theory continued apace in the department in the form of student-led Yiara. Yiara Magazine's third volume, which features the creative and academic work of 15 students, was launched in March at the Glass Door Gallery in conjunction with an undergraduate art exhibition, curated by Yiara executives. In addition to overseeing their limited-edition, print publication, Yiara teamed up with several student groups and two members of the Villes-Laine collective in autumn 2014 to yarn bomb the iconic statue of Louis Cyr in Saint-Henri. All projects were made possible thanks to university grants from Concordia and McGill University.

From yarn-bombing to sloppy craft

Dr. Elaine Paterson's research on historical Irish and Canadian lace featured in her article, “Crafting Empire: Intersections of Irish and Canadian Women’s History” for the Journal of Canadian Art History (34:2). Her book Sloppy Craft: Postdisciplinarity and the Crafts is being published by Bloomsbury Academic in 2015. This volume, co-edited with Dr. Susan Surette (SSHRC postdoctoral fellow, NSCAD), assembles leading international artists, historians, theorists, and educators to explore the possibilities and limitations of “sloppiness” in contemporary art and craft scholarship, practice, and pedagogy. 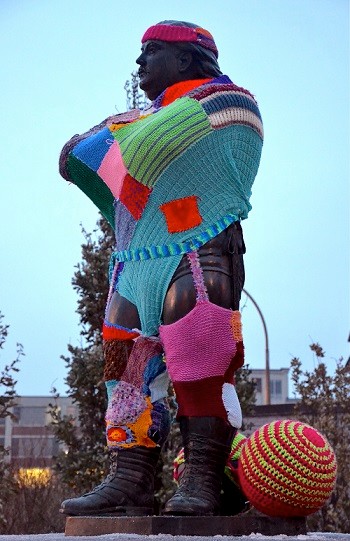 Concerning the spiritual in art, and conferences on art

Dr. Stowell published The Spiritual Language of Art: Medieval Christian Themes in Writings on Art of the Italian Renaissance with Brill in November 2014. Analyzing the literature on art from the fifteenth and sixteenth centuries in light of medieval Christian sources, this book explores the relationship between art and spiritual experience.

Dr. Nicola Pezolet contributed an essay on Étienne Gaboury’s Precious Blood Church to a forthcoming, thematic issue of the journal, Manifest: A Journal of American Architecture and Urbanism. His text is titled “Kingdoms of God”. Dr. Pezolet also received a FRQSC Emerging Scholar research grant to support his first book project on post WWII reconstruction in Europe and the debates in France on the “synthesis of the arts.” He presented this research at the Society of Architectural Historians 2015 conference in Chicago.

Dr. Martha Langford, director of the Gail and Stephen A. Jarislowsky Institute for Studies in Canadian Art, delivered the first keynote at the international conference Picturing the Family: Media, Narrative, Memory, at Birkbeck (University of London), in July 2014.

In October Dr. Huneault and Dr. Anne Whitelaw, Faculty of Fine Arts Associate Dean of Research, co-organized a workshop on settler-colonial art history, bringing together scholars from across Canada to discuss the impact of this emerging body of theory on our discipline. Four scholars from Australia, New Zealand, South Africa and the United States contributed to a lively discussion about settler-colonial art history as a transnational phenomenon. The workshop was funded by a SSHRC Connections grant.

Members of the Object Lives and Global Histories group, co-led by Dr. Whitelaw, attended a three-day workshop at the Pitt Rivers Museum, Oxford, where they examined objects in the PRM's collection of material culture from northern North America, and discussed the global circulation of such objects and the materials from which they are made.

Dr. Margaret Hodges, a part-time professor, received a Concordia University Part-time Faculty Professional Development Grant in April 2015 to participate in the XIth International Institute of Applied Aesthetics Summer Conference on Environmental Aesthetics in Lahti, Finland. Dr. Hodges also read a paper in May 2015 at the Congress of the Humanities and Social Sciences, University of Ottawa, for the Canadian Society for Aesthetics.

The department was home to numerous, welcoming events and a great series of eight exhibitions in our small but powerful exhibition space, Vitrine. One of many highlights from the year was a display of artist books, curated by Melinda Reinhart, the Faculty of Fine Arts Fine librarian. For the rentrée exhibition, Reinhart hand-picked unique and beautiful artist books from the Concordia Libraries’ wonderfully diverse collection. In December, Reinhart also led a workshop on artist books, inviting our many student groups - who are prolific producers of limited-edition publications - to encounter the rich legacy of this genre, especially in Montreal and Quebec. 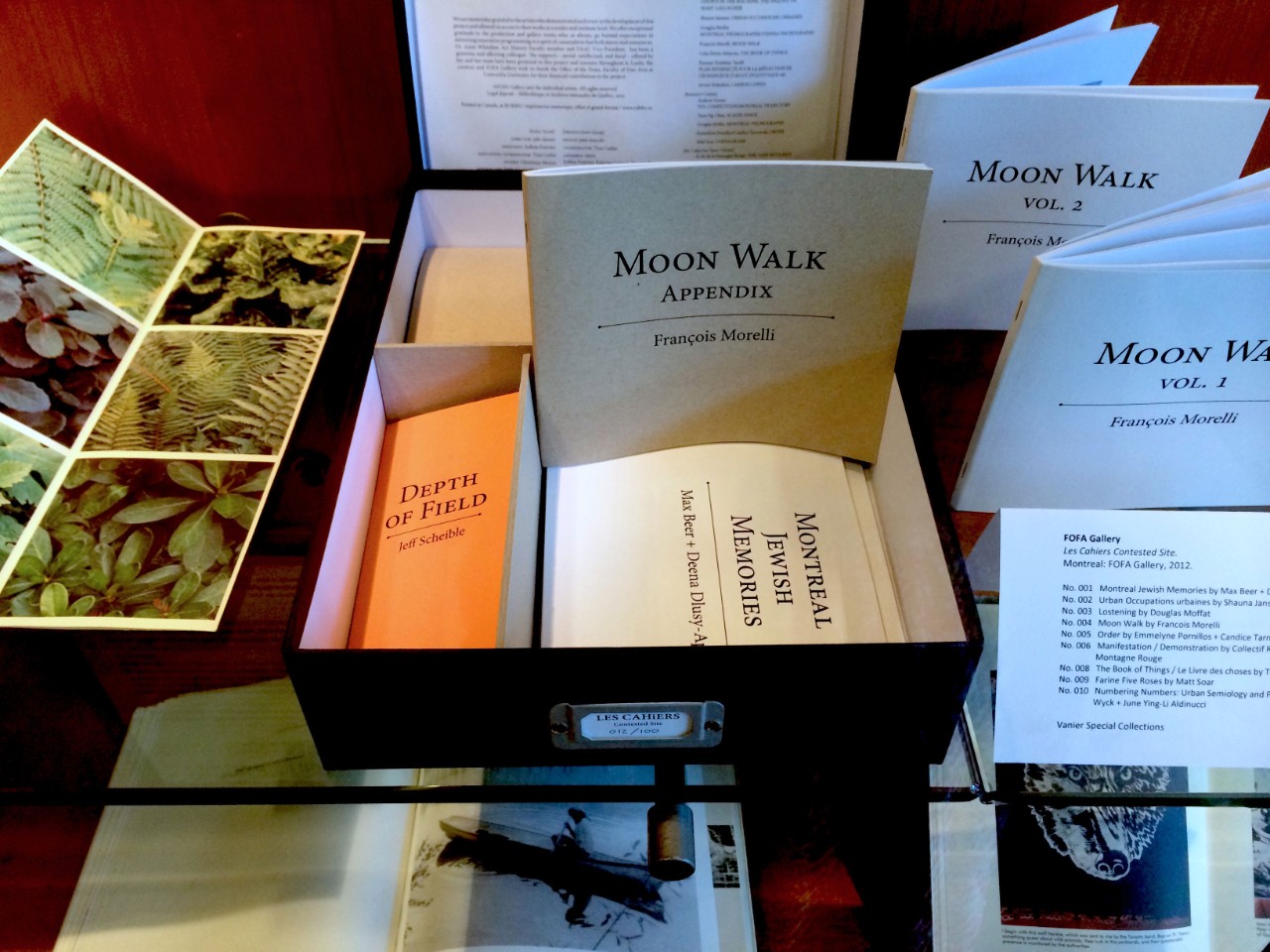 Graduate students were busy this past year with the 9th annual graduate student conference in art history, “Constellations, Clusters and Networks,” which took place in March. This two-day, bilingual conference featured nineteen original academic papers by emerging scholars from across Canada, the United States and abroad. The public event also included a keynote address by Dr. McKenzie Wark of The New School, New York, and a series of workshops led by Concordia Art History faculty, which included additional members of the Concordia graduate community, and were open to the unviersity community and beyond.

Students in Art History have also mounted their own publishing initiatives over the past year. In April, founding editor, Nancy Webb (MA in Art History) launched the inaugural issue of Spiffy Moves, a printed collection of art writing and visual art by graduate students, at Espace Pop in Montreal. Beautifully designed by Xavier Cédric and Véronique Nguyen, Spiffy Moves was made possible through the support of the Departments of Art History and Studio Arts, and Concordia University.

A/C was pleased to team up with the Ethnocultural Art History Research (EAHR) student group, and the Society for Cinema and Media Studies Conference to present a screening of filmmaker Valerie Soe's work. Under the mentorship of Dr. Jim, EAHR completed its first research residency at Artexte from January - April 2015. In addition, EAHR organized its second conference, "Cultural Convergences II: Alliances" in September 2014, hosted artist talks in collaboration with the MAI (Montréal, arts interculturels), La Biennale de Montreal, and the South Asian Visual Arts Centre. All projects were made possible with funding from the Department of Art History, the Gail and Stephen A. Jarislowsky Institute for Studies in Canadian Art, and Concordia University. 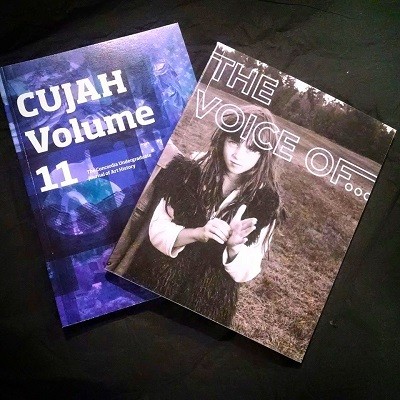 This year was fruitful for the Concordia Undergraduate Journal of Art History (CUJAH). The publication celebrated an astonishing eleven years in print. In addition to launching Issue XI of the journal, CUJAH initiated a collaborative project with the Fine Arts Student Alliance (FASA), titled The Voice of..., showcasing written and visual works by Fine Arts students. CUJAH continued to establish its reputation throughout the year via various events, including the Art History Mixer and Research Workshop, in collaboration with the Fine Arts Reading Room (FARR).

CUJAH is presently in discussion with the Chair of Art History and the Art History Graduate Students’ Association about reviving the Department’s annual bus trip to New York. Pending the results of our fundraising efforts in fall 2015, we hope to create a low-cost option to New York for two culture-packed days and nights for students and alumni.

Our Digital Image and Slide Collection (DISC) has been the site of many changes in the past year. Its much-loved curator, Dr. Janice Anderson, took retirement in November 2014. Dr. Anderson is, alongside Dr. Huneault and Melinda Reinhart, co-founder of the Canadian Women Artists History Initiative. To celebrate Dr. Anderson’s nearly twenty years of feminist research, teaching, and student mentoring, every member of the department - and many students - surprised her by dressing up as a work of art by a Canadian woman artist. Dr. Anderson’s legacy at Concordia is taking new shape in a fresh goal: to turn DISC into a Student Research and Success Centre in Visual Research and Archives. The department looks forward to advancing this project with DISC’s interim and new directors, Kate Marley and Kathleen Perry, and the Faculty of Fine Arts

As June Convocation approaches, the Department of Art History is delighted to celebrate all our graduates. We congratulate them, and wish them the very best as they step into the next phase of their lives. And we thank all our students for the myriad ways in which they have made our department a richer place to study - and shape - the histories of art. 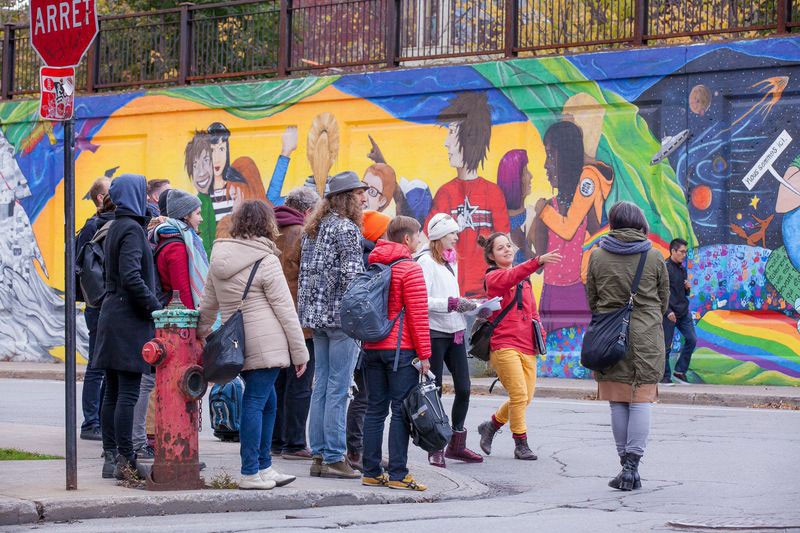 The Right to the City project, photo by David Ward