$10 regular, $5 for students and seniors

Set in New York City at the height of the AIDS crisis, Tony Kushner's Angel's America is a self-proclaimed "Gay Fantasia on National Themes." This modern-day epic follows the interconnected lives of two couples whose relationships are disintegrating, and tackles issues of power, love, truth, loss and forgiveness with humour, integrity and imagination.

Box office:
Tickets will be available at the door. 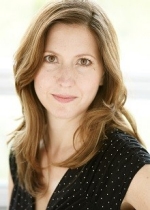 Amanda Kellock is an actor, director, writer and teacher with a BFA in Theatre and Development from Concordia University and an MFA in Directing from the University of Ottawa. She was part of the Directing Masterclass at Magnetic North in 2007, and the Directing Intern at the National Arts Centre for their 2007/2008 Season (under Peter Hinton) where she directed the popular theatrical event Shakespeare’s Birthday. Directing credits include – for Repercussion Theatre: A Midsummer Night’s Dream (2013) for which she was nominated for a META award, and Scapin (2007) which she translated into English and directed in both English and French and for which she was nominated for a MECCA award; for Geordie Productions: the mainstage production of For Art’s Sake by Colin Heath (2010) as well as numerous touring shows: The Shape of a Girl by Joan Macleod (2008), Once Upon a Home (2009) which she also wrote, Derwent is Different by Jamie Norris (2013) and Jabber by Marcus Youssef (2012) which was nominated for a DORA  when it ran at YPT in Toronto (2013) and will be touring to the U.S. this Fall; for the Centaur – True Nature by Colleen Curran (2011); for Composite Theatre Company – Angel’s Share by Alexis Diamond (2013 Montreal Fringe). She was Artist in Residence at Playwrights’ Workshop Montreal in 2011, has had two monologues from her play Fair(L)y (S)Tale published, is a guest artist for Imago Theatre’s Artista mentoring project, and teaches/has taught at McGill University, Dawson College and Concordia University.