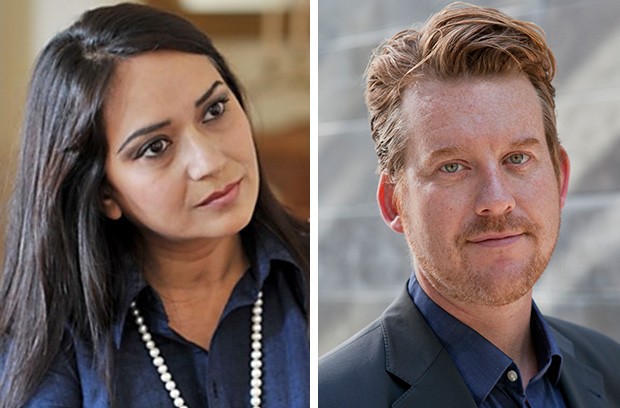 “When journalists are intimidated with threats of violence or actual physical acts of harm, the wider public is literally blinded from knowing the truth,” says Kyle Matthews. At left: Turkish journalist Amberin Zaman.

“I am Exhibit A for the pressures facing journalists in Turkey,” says Amberin Zaman, a veteran Turkish reporter and analyst.

Zaman has covered her country for The Economist for 17 years, and is  a regular contributor to The Washington Post, The Los Angeles Times and The Daily Telegraph.

On Monday, November 16, Zaman will be at Concordia to discuss media freedom and democracy in Turkey with Kyle Matthews, senior deputy director of the Montreal Institute for Genocide and Human Rights Studies (MIGS), as part of Concordia’s Thinking Out Loud series of conversations.

Award-winning Globe and Mail journalist Susan Sachs will moderate the talk, entitled Threats, Risks, Freedoms: A Conversation about Journalism and Human Rights. The lecture is jointly hosted by The International Press Institute (IPI) and Concordia.

On the phone from Washington, Zaman describes what makes her Exhibit A. “I was fired, under government pressure, from the Turkish newspaper Habertürk for being overly critical in my twice-weekly column,” she says.

“I was publicly targeted by [Turkish president Recep Tayyip] Erdogan during two consecutive election rallies last year. I am facing several judicial probes, one petitioned by Erdogan, and I have been named in an indictment in a terror-related case over an interview I did with a Syrian Kurdish leader.”

It doesn’t end there. Zaman faces online threats and death threats from ISIS-linked accounts. Erdogan has publicly called her a "shameless woman," a “militant working in the guise of a journalist" and "scum." She clearly knows first-hand what happens when media freedom is under attack.

In light of Erdogan’s Justice and Development (AK) Party majority win in the recent election, Zaman, Matthews and Sachs will discuss the types of pressure journalists face.

They will address how Erdogan’s victory has impacted the ability of traditional and new-media journalists to work, as well as the broader democratic exchange of ideas in the country.

They will also analyze the implications for Canada and Canadian journalists.

According to Matthews, it’s ominous when journalists are threatened by governments or other actors.

“The silencing of journalists not only robs citizens of understanding what is really transpiring in society — it is also sometimes a precursor to wider and systematic human rights abuses,” he says. “When journalists are intimidated with threats of violence or actual physical acts of harm, the wider public is literally blinded from knowing the truth.”

“The persecution and intimidation of journalists is one important criteria we look for in assessing the risk of serious problems ahead,” says Matthews. “Turkey, a NATO member country, has unfortunately become one of the most dangerous places in the world for those who work in the media.”

“More journalists are imprisoned there than in any other country on the planet. With the crisis in Syria and the country's violence spilling over into Turkey's Kurdish communities and beyond, now more than ever, Canadians need to be concerned with what is happening.”

Register for a ticket online at Eventbrite. The event will also be live-streamed.