is a musician, composer, sound designer and interdisciplinary artist studying electroacoustics and computation arts at Concordia University in Montreal. Their career as a touring and studio musician spans well over 10 years, multiple countries and numerous instruments, and has now expanded into new forms and new collaborations in digital arts, experimental composition and improvised performance. In creative A/V installations, compositions and performances, the weaving of ‘virtual kinetic’ soundscapes through vibrant, textural worlds take center stage while unique, sonic architecture project sweeping narratives. Creative computing intertwines immersive environments while blurring the line between the aural and visual sonic space. Earlier this year, Alana’s audiovisual composition, Vacillations was presented at the New York City Electroacoustic and Computer Music festival and their score for the short-animated film Something Else has premiered at numerous film festivals around the world.

Alana is the co-coordinator, resident musician and sound designer at the lab, and is currently working on the score for the Restorative Justice Project, while researching the intersections of musicology and generative soundscapes in installation work. Alana is an experienced audio mixer for live and recorded work, with a specialization in multichannel diffusion. 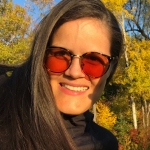 Bachelor’s degree, Fine Arts in Design and Art History from Concordia University. My main interest lie in designing for print and web. I am passionate about telling stories with the images I capture. As a woman designer, I’m constantly wondering how my creations are shaped by the cultural values of the society to which I belong. I define myself as feminist, as a person that cares about human and others beings. As designer, I want my work to both convey my own values and challenge some common assumptions regarding gender. I believe that design may be employed to bring about societal changes, and for this reason my creations are a reflection of my values: equality, respect of nature, and community engagement.

is a Canadian social-conceptual artist based in Montreal (QC) Canada. At the moment, Mockler is an INDI master student at Concordia. Her research-creation project is about 'Creating Applied Performance for Citizen Self-Representation'. Mockler’s artworks have been presented in South America, Europe, the US and in Canada. She is the co-founder of VISIBLE, an art collective dedicated to strengthening social solidarities through documentary citizen performance. VISIBLE is the latest recipient of the Montreal Art Council’s Patron of the Arts First Prize Bursary for its latest work entitled THE ADDRESS (2019), an ethnodocumentary performance about the housing crisis in Montreal. Mockler is herself the author of CANVASSERS (2017), a video performance presented at the Ammerman Center for Arts & Technology for Critical Study of Race & Ethnicity Biennial, of RIVIÈRES (2017), a series of documentary performances presented in the city of Montreal’s 375th anniversary program, of LES INTERPRÈTES (2018), a series of documentary video interventions featuring 16 teenagers who had recently immigrated to Quebec presented at Maison de la culture du Plateau-Mont-Royal, and of CHRONIQUE D'UN ÉTÉ (2016), a cinéma-vérité inspired video performance featured at the Women Cinemakers Berlin Biennial.

In her social and conceptual practice, Mockler works with individuals, groups and communities to represent their reality in the public realm. Individuals and their actual experiences are at the forefront of her work, which takes the shape of public and/or intimate performances, video installations and nonfiction media art. Veronica Mockler uses oral history, documentary and conceptual art frameworks to create projects that strengthen the agency of the people she works with. The ethics of representing the Other in art, and the fragility of social art practices, are subject matters that drive the artist in her research.