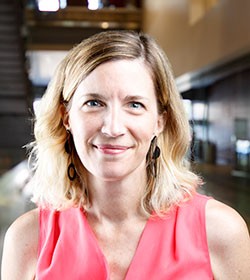 The Associate Dean, Academic Affairs is responsible for the development and maintenance of all academic programs within the Faculty, and for student issues and welfare.

These responsibilities include: assessing and shepherding curriculum proposals, administering Fine Arts courses for non-Fine Arts students, supervising the periodic departmental review process, liaising with Concordia's Office of the Provost, School of Graduate Studies and Concordia Continuing Education, making recommendations on student funding, administering the Academic Code of Conduct, and handling student concerns and complaints that cannot be resolved at the departmental level.

The staff in Student Academic Services can provide students with a wide range of information and academic counselling.

Elaine Cheasley Paterson is Associate Dean, Academic Affairs and Associate Professor of Craft Studies in the Department of Art History at the Faculty of Fine Arts of Concordia University in Montréal, Canada. She holds a PhD from Queen's University (Kingston, 2004), where she was a recipient of the Bader Fellowship in Art History. Her funded research concerns women's cultural philanthropy in early twentieth-century British, Irish and Canadian craft guilds of the home arts movement and for tracing a lineage from this historical material to the current resurgence in Do-it-yourself, maker culture and craftivist practices.