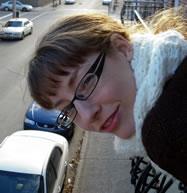 Hillary Kaell completed her doctorate in American Studies at Harvard University, specializing in the history and practice of North American Christianity. She is author of Walking Where Jesus Walked: American Christians and Holy Land Pilgrimage (New York University Press, 2014) and editor of Everyday Sacred: Religion in Contemporary Quebec (McGill-Queens University Press, 2017). Her current FQRSC-funded project examines the development of a global Christian imaginary through the lens of child sponsorship programs.

Dr. Kaell has written for popular audiences online and in print, and collaborated on a number of public education projects, including as a paid consultant on the PBS television series God in America. Currently, she co-curates the Anthrocybib website and co-hosts the New Books in Religion podcast. At Concordia, she teaches courses related to U.S. Christian history, material religion, and anthropology.

She is a faculty fellow with Concordia's Center for Sensory Studies and has just signed on as co-editor of the Society for the Anthropology of Religion's book series at Palgrave Macmillan press.

“How Distrust Begets Asking and Giving in Christian Child Sponsorship” in ed. Frederick Klaits, The Request and the Gift in Religious and Humanitarian Endeavors, 93-116. Palgrave Macmillan. 2017.

“Under the Law of God: Mimetic Discipleship and Obligation among Christians Living Jewishly,” Journal of the Royal Anthropological Institute, 22 (3) 2016:496–515.