How John Moore became the toast of Toronto

‘Radio is about authenticity and connection with the listeners’
|
By Richard Burnett, BA 88
Source: Concordia University Magazine 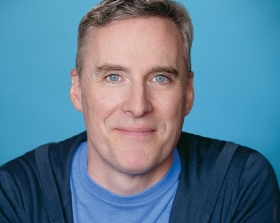 ‘I am a huge Concordia booster and Communications is still everything to me. I loved doing the degree.’

Moore spent years paying his dues, launching his career as a reporter with CHOM in Montreal. There would be plenty of other gigs, including work as an in-demand voice artist and columnist for the National Post.

Like many Montrealers, Moore has made Toronto his home. The bustling metropolis tunes in Moore in the Morning on NewsTalk 1010 weekdays from 5:30 a.m. to 9 a.m.

John Moore: The hours. The hours are insane. I get up at 2:30 in the morning and go on-air at 5:30. I always say it still feels like I’m getting into a moving car. It ends at 9, but then there’s meetings and interviews to do, and you spend the whole day wondering, ‘What are we going to do tomorrow? What are the big stories?’ You are pretty much working all the time.

The other funny thing is, because of these crazy hours, it’ll be 11 o’clock in the morning and I’ll feel like I’m playing hooky because all of my other friends have real jobs.

It’s the same thing as when I used to do improv. People ask, ‘How hard is it to go onstage and make things up?’ But good storytelling isn’t easy. I had a friend who said all I do on radio is talk, then when I had him on my show, he clammed up.

What was it like coming out publicly in 2019 about your battle with anxiety?

It’s a mixed bag. I want to be careful what I say because every interview I do, every encounter I have, centres on that. All I can say is there was no question whether I would talk about it because radio is about authenticity and connection with the listeners. If I was going to tell my friends about this, then I was going to tell the listeners about this. So after a month off work, I came back and prepared a statement because I wanted people to know exactly where I’d been.

I don’t want to be a poster boy for anxiety, I don’t know if I’m even a good poster boy because it was relatively easy for me. Others deal with this their whole lives. But people reached out to me, like parents whose kids and teens have anxiety, other people in my industry, police officers, single moms, you name it. They said, ‘That’s me!’ Now they know they can do something about it, and that’s healthy.

Has being an out gay man affected your career?

Not really. I don’t make a big deal about it anyway. I’ve never believed you inform a debate by saying, ‘I’ve been at a mass shooting, so I know about gun control.’ I talk about my partner on the radio but it’s never that major a component.

You were a founding member of Montreal’s On The Spot players. Do you miss performing improvisational comedy?

I miss it terribly, but you get to the age where you look like somebody’s dad and you shouldn’t be onstage anymore! I decided to dedicate myself fully to my radio show in Toronto in 2003.

There is a lot in my life that prepared me for this. I am a huge Concordia booster and Communications is still everything to me. I loved doing the degree. I also went to the School of Community and Public Affairs, and that was my foundation in politics, history and economics.

I wrote a column a few years ago about all the teachers who influenced me. I can take it back to Grade 3. But at Concordia I learned much from professors Donat Taddeo, Harold Thwaites, Margie Mendell and Dennis Murphy and that’s a double connection because my Dad taught him, and Dennis taught me.