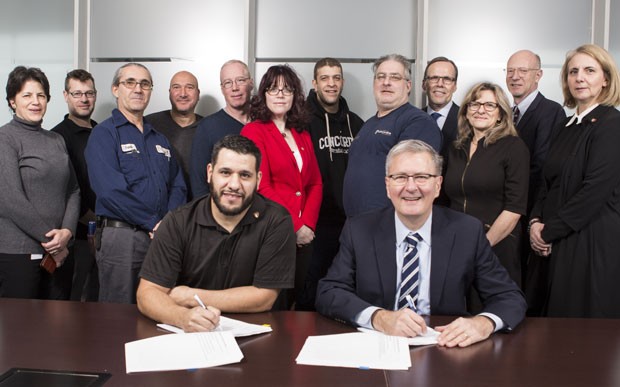 The two parties reached an agreement in principle last summer, approved by the Board of Governors on August 25, 2017.

Pat Pietromonaco is senior director of Property Management. He oversees the group that includes transportation and distribution, plumbing and refrigeration, carpentry, and electricity. Locksmiths, mechanics, painters, and power plant staff are also members of STTMC.

“This team plays an important role in operating many critical university building services and functions. I appreciated the chance to get to know these colleagues better,” he says.

“Our exchanges were positive and the team worked collaboratively to meet joint objectives and conclude the agreement in a timely manner.”

Concordia has signed three contract agreements with employees’ unions in as many months.

Roger Côté, Concordia’s vice-president of Services, applauds the effectiveness of the negotiating teams.

“The two parties managed to settle complex issues within five meetings. What they accomplished is a testament to their commitment and diligence,” says Côté.

With this chapter closed, a new one will soon open. The union and the university are due to begin another round of talks this year.

“We’re looking to the next round of negotiations with optimism,” says Daniel Rodrigues, president of STT des métiers de Concordia. “We plan to build on this last series of talks to move the concerns of our members another step forward.”

Present on behalf of the university:

Present on behalf of the union:

The text of the agreement between Concordia and the Syndicat des travailleuses et travailleurs des métiers de Concordia-CSN will soon be posted online.