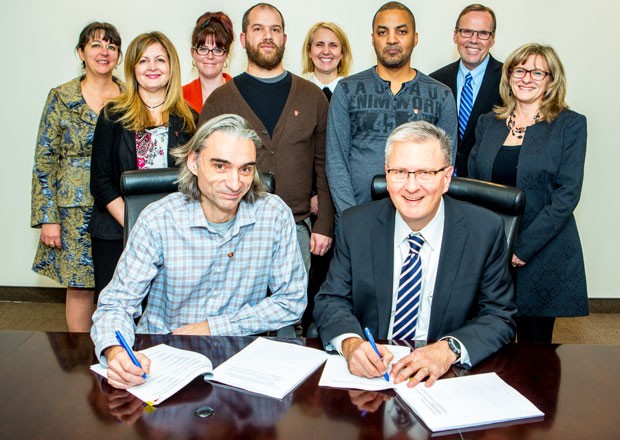 The university has signed a new collective agreement with the Concordia University Library Employees' Union (CULEU). The two parties made it official on November 30.

Guylaine Beaudry is vice-president of Digital Strategy and university librarian. She oversees library faculty, managers, and staff — groups that have seen significant changes over the years.

“Libraries worldwide are undergoing dramatic transformations. The increased offer of digital collections and services means that our staff is called upon to keep pace with advances in technology to better serve Concordia’s next-generation library users,” she says.

“I recognize that the negotiation of a collective agreement is a difficult and very important task. I am really grateful for the time and effort that everyone put into reaching this new one.”

Concordia’s Board of Governors approved an agreement in principle at the end of August — one translated into writing over the last three months.

“Both sides brought some very important issues to the table, so it’ll be great to be able to put this new collective agreement into practice,” he says. “And now, of course, we’re looking forward to the next round of negotiations which we hope will begin very soon.”

Roger Côté, vice-president of Services, applauds the commitment and hard work that led up to the signing.

“I’m happy that the parties came up with a fair agreement,” he says. “We’re looking forward to starting a new round of negotiations in a good climate, based on mutual respect and collaboration.”

Present on behalf of CULEU: